Ewald Uechtritz, caught up in WW2, was to serve in the German U-Boat arm on opposite sides to his former class mates.

MHHV > Articles > World War Two to 1962 > Ewald Uechtritz, caught up in WW2, was to serve in the German U-Boat arm on opposite sides to his former class mates.

Sitting high on a hill in New South Wales is Saint Ignatius’ College, better known as ‘Riverview’, because of its prime position overlooking the Lane Cove River. Here is a fascinating story of a former School Captain, Ewald Uechtritz (1935-1938) who had a German father.  Ewald was Head Prefect in 1938 and he returned to Germany to attend university there.  Caught up in WW2, he was to serve in the German U-boat arm on opposite sides to his former class mates.
God’s Dilemma.
Former Rector of Riverview Fr Noel Hehir SJ (1935-1945) referred to it as “God’s Dilemma”. The confluence of timing, fate and history that led to Ewald Uechtritz going from Riverview School Captain (1938) one year, to fighting on the opposite side of his recent classmates in a World War the next, is profoundly complicated and unfathomable in modern terms.
What is clear, however, is that Ewald applied the principles and values learned at Riverview in helping resolve his dilemma. College history records that Ewald Uechtritz was regarded by his Masters as one of the finest young men to have passed through Saint Ignatius’ College. The son of a German planter and Danish -Samoan mother in Australian-administered New Guinea was quaintly described as “the embodiment of British schoolboy virtues”.
Head Prefect in 1938, Ewald also was voted the most popular student. He captained the athletics team and excelled in both the rugby 1st XV and cricket 1st XI, winning a cricket bat in recognition of his double (81runs and 6 for 58) against Shore. Decades later Ewald would still delight in memories of being taken to watch his hero Don Bradman play at the SCG. He spent his prep school years at a college in Bradman’s home town Bowral.
As a natural extension to this very Australian boyhood, Ewald enrolled to study engineering at Sydney University. But his outstanding performance at Riverview led his father to first reward him with a holiday to visit his grandmother in Hamburg, Germany.
As his ship sailed from Rabaul, in early 1939, little did Ewald know it would be the last time he’d ever see his parents, or his boyhood home of New Guinea and Australia, and 15 years before he’d again see his younger brother Alfred.
War broke out after his arrival and he was automatically conscripted into the German Navy. Although New Guinea was then governed by Australia, under mandate from the League of Nations, by law, residents took the passport of their father until they turned 21, when they could choose their nationa1ity. Ewald was not yet of age – and thus was German. Suddenly he was on the opposite side to his close friends and classmates.
“It is like a nightmare, like a dream,” he told the Sydney Morning Herald in 1993. “Everything became so unexpected. It was an awful feeling at first, but I was a German citizen, my father was German.”
“When I was called up, I saw no reason not to do my duty. It was something I learned at school and I stuck to that. It was an unsettling feeling, knowing your school friends are on the other side.”
The Herald article marked the belated addition of Ewald Uechtritz to Riverview’s honour roll of Old Boys who fought in WWII. The College has never “disowned” Ewald, and one of his mentors Fr T J McLoughlin SJ even updated Our Alma Mater during the war years with news of his activities, via letters from Ewald, sent from Switzerland.
However it was 48 years before then Headmaster Fr Greg O’Kelly SJ had Ewald’s name physically emblazoned on the relevant honour board, It remains there – right at the top, because that was the only space available – as an enduring testament to reconciliation.
Fr O’Kelly received numerous, emotional letters of congratulation for, as one described “a gesture which I am sure all Old Boys will applaud, most particularly those who, also saw service”.
The irony of Ewald’s situation was that while he was serving in the German Navy, his beloved grandmother Phoebe Parkinson starved to death in a Japanese prison camp, in New Guinea. His brother Alfred spent the war years as a jackaroo, on properties of Riverview friends, working in a Holden factory and, by war’s end was wearing the uniform of the Australian army reserve.
Ewald spent his early Navy service on convoy duty, but was earmarked to train for the elite U-boat force and served as First Lieutenant (Navigator) in two submarines in 1944 and 1945. 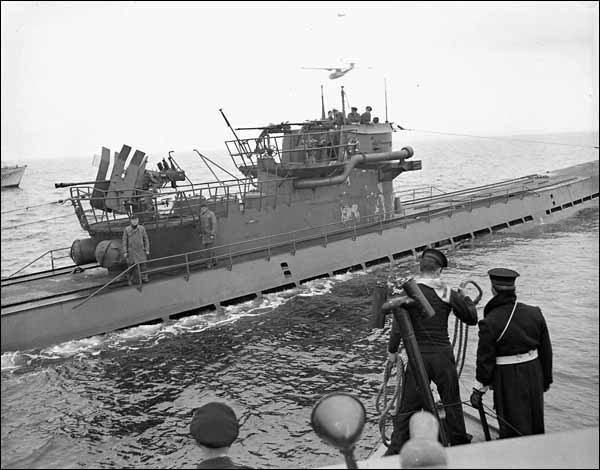 He was awarded the Iron Cross for bravery. Typically, he never spoke about it but, according to his father, it was for risking his life to rescue shipmates after his convoy escort was sunk by Allied planes.
However, Ewald described one fateful moment after he was assigned as navigator in a submarine being readied for combat duty. The U-boats were suffering incredible losses at this time and, indeed, ended the war with a 75% casualty rate, or 28,000 submariners killed in 793 boats sunk. Crews were being desperately cobbled together.
Ewald was on watch, the night before deployment, when an older, unshaven officer approached and said he had orders to replace Ewald in the U-boat. This man had just survived another U-boat sinking and was assigned over Ewald because of his extra experience. “My heart was pounding, as I heard this, and while they were checking his papers, as there were so many stories of the horrible losses”, he said. Ewald was replaced. The submarine put to sea and was sunk with no survivors.
After the war, Ewald applied for repatriation to Australia but was refused by British military assessors. When he sat his entrance examination for Hanover University, he was given special dispensation to write his essay in English because, as he said, “My German was so crook”.
He funded his way through university picking up rubble and as a tram conductor. He met and married the love of his life Annegret and forged a highly successful career as a geophysicist for Mobil Oil. Once he applied for a transfer to Adelaide, but Mobil sent him to America, Ewald was responsible for bringing the first computer to Germany after seeing one in Dallas and writing a business case for Mobil to buy the room sized technology.
The Riverview bond held all his life. He cherished the many visits to Germany by Old Boy chums, When he and Dr Keith McManis got together, once in Amsterdam, they even conjured up a nostalgic game of cricket. Ewald remained close to brothers Dexter and Eic Giblin, also boarders from New Guinea and Riverview alumni. The three colonial lads each captained their school, in successive years 1937-38-39.
Ewald never forgot the humanity of another classmate Jim L’Estrange, who arranged for his father Peter Uechtritz – terminally ill after contracting TB in an “alien” camp in Victoria to be transferred to Sydney’s Concord Hospital, where he died in 1947.
Ewald was intensely proud of little brother Alfred for being a “self-made man” in Australia, after war rent asunder their family. Alf died of cancer, on his Innisfail farm in late 2008; Ewald lost his own battle with cancer on March 16, 2010.