A Soldier’s Story: The Boer War to Beersheba

MHHV > News > A Soldier’s Story: The Boer War to Beersheba

MHHV member Peter Kemp has released a new book detailing the story of his grandfather, James Cue Ryan, a journalist, a member of the 4th Victorian Imperial Bushmen and then Commonwealth Horse in South Africa, and a lighthorseman of the 4th Light Horse Regiment in the Great War. He served at Gallipoli and was among those at the famous battle of Beersheba in 1917.

Ryan worked in South Africa from 1894 – 1899, returning home to Maffra, Gippsland in 1899.  In 1900 he enlisted in the 4th Victorian Contingent under Lieutenant-Colonel Nicholas William Kelly, sailing to Beria in Portuguese South Africa. He served for the obligatory 12 months and then in 1902 joined up with the Commonwealth Light Horse until the end of hostilities in South Africa.

In 1915 he told the army he was 43 (actually 46) and joined the 4th Light Horse Regiment. He served in Gallipoli, Egypt and Palestine. He was one of the members of the famous Charge of Beersheba. He was never wounded, but like many others did contact dysentery and was discharged medically unfit in 1918. He worked on as a journalist until passing away in 1955 at the age of 86years.

This is not just an ordinary account of one soldier’s service however for Ryan served primarily as a journalist reporting the wars back to the Maffra Spectator and the Walhalla Chronicle, making the combination of his keen observations for his diary and news reports an absorbing and fascinating insight to his service in two wars. Kemp has listed his grandfather as a co-author, in recognition that he drew extensively from his grandfather’s own newspaper reports. 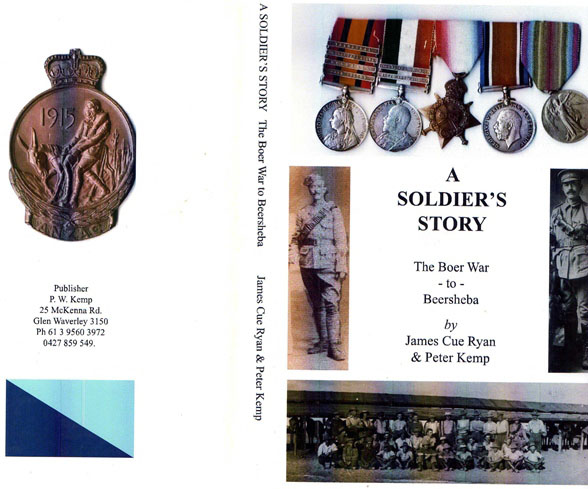 This is the third book by Peter Kemp, a print and radio journalist himself, a former National Serviceman and a keen follower of Australian military history and heritage, promoting among other related organisations the National Boer War Memorial Association (Vic).  Copies of the book are available through MHHV for $35 and $5 postage.  Please contact Peter through info@mhhv.org.au.