Six days after Montgomery’s Eighth Army landed on the toe of Italy and began its ponderous advance north, troops of the Anglo American Fifth Army came ashore at Salerno further along the west (Aegean) coast with the objective of cutting off the retreating enemy and quickly capturing the port of Naples. The landings themselves were largely unopposed. One ashore, however, troops came under fierce German counter- attacks by three panzer divisions and members of the 29th panzer grenadier division. A dangerous seven mile gap between the two landing beaches was created.
Known as operation ‘Avalanche’, it was under the command of the US general Mark Clark who, conducting operations from an American war ship, was to prove less than an effective commander – demonstrating that he had little idea what was happening on land and hampered by poor radio communications and thick smoke.  The flamboyant General George Patton who led the Americans in the invasion of Sicily was in disgrace following an incident in an American field hospital when he accused two soldiers of cowardice, threatening to shoot one of them. He was disciplined by the commander-in-chief, General Dwight Eisenhower, and made to apologise.
Carefully timed to avoid any resistance by Italian troops to the new landings, it had been announced the day before that Germany’s former ally had surrendered its armed forces unconditionally and was no longer a member of the Axis alliance, effectively taking Italy out of the war.
Germany’s reaction to Italy’s defection was swift and predictable. Within hours of the  Italian surrender, General von Vietinghoff, the commander of the German Tenth Army, deployed paratroops and a panzer division to occupy Rome.  At one stage five Italian divisions appeared ready to defend the city from German occupation but they quickly capitulated. By now the entire Italian armed forces were completely demoralised and weary of the war and had lost the will to fight even in defence of their own homeland.
Meanwhile, back at the Salerno beach-head landings, fierce fighting continued unabated and at one stage it seemed likely that the Germans would succeed in forcing the invaders to abandon the operation. It was only the arrival of reinforcements from the US 82nd Airborne Division led by General Matthew Ridgeway ( later to command and achieve fame in Korea and Vietnam) and the arrival of tanks of the British Seventh Brigade of the Eighth Army that saved the day and forced the panzers to withdraw northwards. But for a time it had been an extremely touch and go situation.
While the battle of Salerno raged, dramatic events were occurring with the former dictator Benito Mussolini. Since his arrest by the king, who had fled from Rome along with the new Government of Marshal Badoglio, Mussolini had been moved to various locations to avoid any rescue attempt by his remaining followers. First he was taken to a seaside boarding house and subsequently to a villa on a Sardinian island. Finally he was moved to a hotel on the Grand Sasso Mountain in the Apennines. The hotel was high above sea level and accessible only by cable car. In addition, Mussolini was guarded by a detachment of carabinieri (armed Italian military police) whose orders were to shoot him to avoid capture.
Hitler, whose sole aim now was to keep Italy in the war and tie-up as many British and American troops as long as possible in order to delay any Allied plans for a cross-channel invasion, gave orders for his former Axis partner to be rescued.  In a brilliant operation involving elite German paratroopers and gliders and a hair-raising take-off in a tiny aircraft, Mussolini was released and delivered safely to an Italian airfield before being flown to Hitler’s headquarters at Rastenburg in East Prussia. It was one of the most daring and audacious operations involving a head of state of the entire war.
Under Hitler’s influence, Mussolini was persuaded to create a new Fascist regime to be based at Gargnano on Lake Garda in German-occupied northern Italy. The new state would  be called ‘The Italian Social Republic’, later to become known as the infamous Republic of Salo which during its short existence proved to be one of the most repressive and evil regimes of the Second War.  Nearly all the so-called ‘ministers’ of this puppet state were subsequently executed as war criminals. 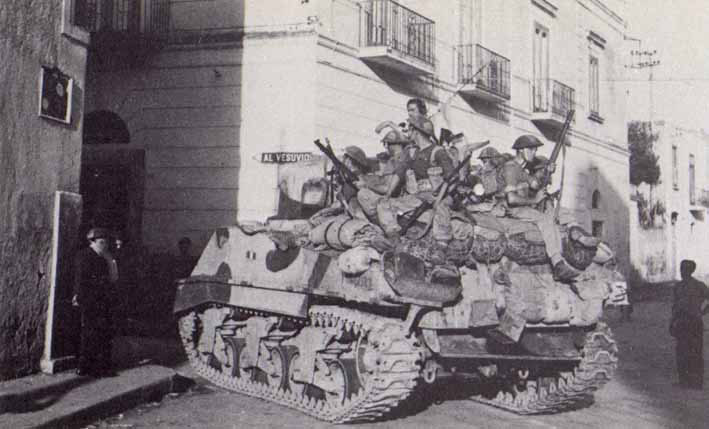 As the Allied troops fought their way with considerable difficulty towards Naples, the population rose up against the German garrison and was brutally put down, with hundreds killed in street fighting.  Hitler had ordered the complete destruction of the city. But it was not until 1 October that Allied tanks finally rolled into the city to find that everything of possible military value had been systematically destroyed by the retreating Germans.  The port, the capture of which was the main objective of the Salerno landings, was a mass of twisted wreckage and sunken ships and the industrial area almost flattened, due largely to Allied bombing. Piles of bodies lay rotting in the streets and the stench of raw sewage pervaded everything – the Germans having blown-up the drainage system and the aqueduct that brought fresh water to the city. The population of more than a million people was on the point of starvation and was threatened with mass epidemics. This situation was to be encountered time and time again as more and more Italian cities were occupied. Dealing with the plight of the civilian population became a major headache for the Allied forces.
Heavy rain had washed away bridges and flooded roads. The rugged terrain and stiff resistance by small enemy detachments slowed the Allied advance and gave the Germans more time to prepare their defences further north along the Liri and Rapido rivers. By the middle of November however, something of a stalemate had set in with both Allied armies exhausted and unable to penetrate the German positions. Earlier the British Fifty-Sixth Infantry Division had attacked Monte Camino, a barren three thousand foot mountain which the Germans had covered with mines and booby traps, only to be forced to withdraw with heavy losses following a series of brutal counter-attacks.
Adding to the misery and frustration of the Allied forces were the wintery conditions that had now set in. Both the American and British troops lacked proper winter clothing, many having arrived in Italy from North Africa only in shorts and shirts and some even without greatcoats. In consequence, there was much suffering and hardship during that first winter of the Italian campaign with the troops exposed in the bleak mountainous regions of the Apennines.
For the ordinary soldier, cold, often soaking wet and hungry, every crossing of these swollen rivers became an ordeal.  For example, members of the British Ninth Commandos had a particularly rough time near the mouth of the Gargigliano river. With the capture of towns and hamlets the plight of the Italian people became more apparent.
On 2 December British troops spearheaded a combined second attempt to capture Monte Camino and after several days of heavy fighting managed to force the Germans to retreat. But this was only the first of several fierce encounters on other nearby mountain peaks against a determined enemy entrenched in well-sighted pill boxes and bunkers in what was fast becoming a vicious slugging match. Any hopes of a quick end in Italy were fast disappearing and the bitter struggle for Monte Cassino which would last for five months was yet to come.
Something militarily imaginative and dramatic needed to be done to break the deadlock unless the campaign was to drag-on interminably.