A wintery tale – Part 3 – The Agony of Cassino

After four months of bitter fighting since invading the Italian mainland, by the end of 1943 the combined British and American armies hadn’t got much to show for it.

Certainly they had forced political change, replacing the Fascist dictatorship of Mussolini with a new government that withdrew from the military alliance with Nazi Germany and surrendered such of their armed forces that remained under their control.  The Italian fleet based at Taranto had hoisted the black flag of surrender and sailed to Malta, Gibraltar and other Allied ports, thus removing the naval threat in the Mediterranean. 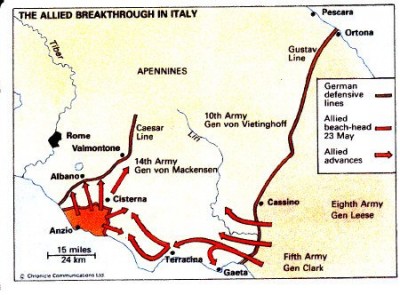 After a painstaking advance from the toe of Italy by the British 8th Army, for which Montgomery was severely criticised by both American and British commanders, the strategic port of Naples had finally been captured but left largely inoperable due to widespread sinkings which had choked the harbour, and German demolitions.  The push further north had become stalled and severe winter weather had set in, delaying still further any prospects of an early capture of Rome.
During their retreat, the Germans had conducted a skilful withdrawal, destroying bridges, ripping up railway lines and demolishing tunnels, leaving a trail of havoc in their wake. They had also kept their forces largely intact and not suffered any severe losses in either men or equipment. By comparison, the capture of Naples had resulted in severe Allied casualties and produced an ever lengthening supply line that was barely able to maintain any further advance.
After abandoning the so-called ‘Barbara Line’ between the river Trigno and the village of San Pietro in which a mere 100 Panzergrenadiers caused 1500 American casualties, the Germans had withdrawn to a second series of fortifications know as the ‘Gustav Line’ which stretched across the entire breadth of the Italian peninsular from south of Ortona on the east coast to Gaeta on the west coast. This defensive line was anchored on the massif of Monte Cassino with its 700 year old Benedictine monastery dominating the surrounding area. And it was here on the rocky, unforgiving slopes of Monte Cassino where things really ground to a halt and developed into one of the great land battles of the war.
Interestingly, on 22nd November, having established a bridgehead of five infantry battalions of 8th Army on the north bank of the Sangro river, Montgomery had prematurely declared that ‘the road to Rome was open’. This was pure Monty hyperbole and had no relation to the actual situation facing the Allied forces in their attempt to capture Rome. In any case, Montgomery was about to leave Italy to prepare for the invasion of France, much to the relief of his many critics who claimed he had been over cautious and failed to exploit favourable opportunities.
In an attempt to outflank the ‘Gustav Line’, on 22nd January 1944 Allied forces mounted a second sea-borne invasion behind enemy lines at Anzio on the Tyrrhenian Sea. The Germans were caught entirely by surprise and by the first evening 50,000 troops and 3,000 vehicles were ashore against negligible opposition. The road to Rome, barely 51 kilometres away, really did seem to be open. But once again initial success proved to be illusory and the force commander, U S Major-General John Lucas, failed to grasp the opportunity to push ahead, with strong mobile forces giving the Germans sufficient time to bring up reinforcements.
Indeed, far from breaking out and pushing on to Rome, by the middle of February and under constant German attacks, the new beach-head was on the defensive and being pushed back towards the sea, even raising the prospect of another Dunkirk-type evacuation. Churchill was furious at this latest setback to break the deadlock at Cassino growling: ‘We hurled a wildcat on the shores of Anzio – all we have is a stranded whale!’ which did not exactly improve relations between the Allied force commanders already under considerable strain about the conduct of operations.
As if this was not bad enough, the Allies now committed one of the most stupid blunders of the entire campaign.  Believing that the Germans were using the Cassino monastery as an artillery observation post and frustrated at not being able to make any progress to capture it by ground forces, they asked the American Air Force to launch a massive bombing raid which reduced the mighty edifice to a shattered ruin – 600 tons of bombs were dropped in 20 minutes by B17s and medium bombers. The result was a military disaster which delayed any progress towards Rome for four months.
As it turned, out the monastery was not occupied by the Germans and never had been although some had been there to help the monks remove the precious books and manuscripts for safekeeping in the Vatican. But this did not amount to any military occupation of the building. In fact, they had been given strict orders not to occupy the monastery. 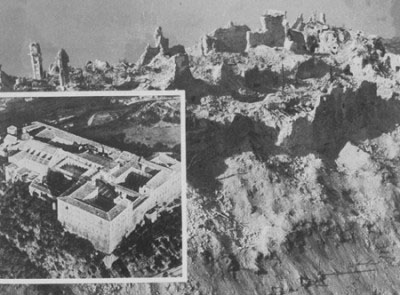