“An Australian Band of Brothers” presentation by Mark Johnston

At the Pompey Elliott Memorial Hall Wednesday February 20, 2019 to a group of around 40.

Dr Johnston’s discussion followed a small group of front-line soldiers from their enlistment in the dark days of 1940 to the end of World War II. His principle focus was on three young South Australians who enlisted as privates at the start of the war. 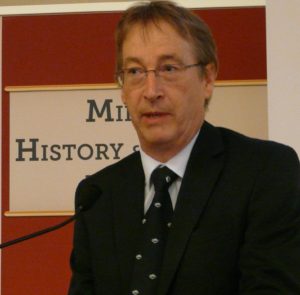 The young men started as ordinary soldiers. They were thrust into war in the Middle East as members of Don Company and part of the famous 9th Australian Division which, during the war, sustained more casualties and won more medals than any other Australian Division.

As part of the 9th Division, they experienced night patrols at Tobruk, advances through German barrages at Alamein, charges into enemy machine guns in New Guinea and repelling Japanese charges in Borneo. Using their trajectory through the war as examples, Dr Johnston explored the theme of leadership in the Australian Army. Quite early on, the experiences of the three young privates diverged. 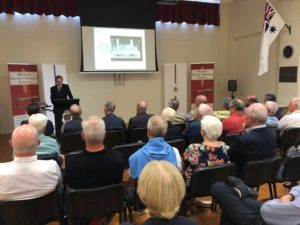 It is as sad fact that the junior officers commanding companies (captains) and platoons (lieutenants) had greater casualty rates than the men as they took big personal risks – risks associated with needing to move around their men and from leading by example.

Luckily the AIF had a remarkable ability to throw up leaders in battle and given the losses of junior officers it wasn’t long before the South Australian privates took command under fire. All three men were pleased with the way the Australian army promoted on merit and all rose to become corporals and sergeants. It was explained that being corporal was perhaps the hardest level because corporals had to live with the ranks while passing on orders.

Two of the men stopped their rise at that level while the best educated, Gordon Coombe was sent for officer training and become captain by the end of the war. In the final year of the war, he was taken off front line duties to become battalion adjutant – the commanding Lt. Colonel’s staff officer. Coombe had also been awarded the Military Cross.

Changes based on merit was a two-way street in the AIF and the men were pleased that non-performing officers were ‘moved along’ fairly quickly.

In the Middle East there was considerable friction between British officers and Australian enlisted men. The Australians, all volunteers, considered the spit and polish procedures demanded by the British to be humbug. Thus, the British considered the Australian soldiers to be undisciplined. Yet the AIF showed remarkable discipline where it mattered – in battle. This was in part due to trusting their officers and being told why orders were given.

About Dr Johnston
Mark Johnston is Head of the History Department at Scotch College, Melbourne. Dr Johnston has published eleven books principally about the Australian Army in the Second World War and was described in the Australian War Memorial’s magazine, Wartime as ‘the leading historian on the experience of Australian soldiers during the war’. Mark is patron of the 9th Division Association in Victoria.
https://www.markjohnstonhistorian.com