Anzac Cove to Afghanistan, The History of the 3rd Brigade by Glenn Wahlert – Book Review

‘The History of the 3rd Brigade’ is a story about a formation which will always stand ready to defend the national interest at short notice, wherever and whenever required.’ Brigadier RJH Noble, Commander 3rd Brigade.
This is a history of one of the Australian Army’s brigades. This substantial text illustrates how history explains and justifies some of Australia’s defence policies now in the public arena. The text is well sourced, well documented and well illustrated. Wahlert states that the book is not about grand strategy or the competence (or lack of) of the high command, but is simply a description of the 100-year journey of one of the Army’s most experienced brigades. Wahlert describes the 3rd Brigade as a ‘learning organisation’, for in organisational terms, the Brigade has learnt and continues to learn from its own and the mistakes of others.
The origins of the 3rd Brigade can be traced from its pre-1914 Militia beginnings to its coming of age as a part of the AIF, and its very active service on Gallipoli and then the Western Front. This reviewer knew an original (1914) member of 12th Battalion. He described the 12th Bn as ‘a mixed bag of odds and sods, some of whom came from WA and some from Tassie’. Being a West Australian, and ‘being shoved in with Tassie blokes was (as he said) infra dig.’ He reminisced about him not being a member of the 11th Bn. His graphic observations of events on Gallipoli and the Western Front, and then Wahlert’s writings as the professional historian of these same periods are remarkable. Wahlert’s comments and the personal reflections of the ex-soldier reinforce and complement each other.
The narrative becomes a little complicated when the AMF re-raised 3rd Infantry Brigade in 1915 as a militia formation in Brisbane. Wahlert describes the lack-lustre interwar years and the period, 1941-1945, when 3rd
Brigade, once again a Militia formation, confronted the Japanese in TPNG. Today the 3rd Brigade is ‘the core ready force of the Australian Army and the Australian Defence Force’.
The History of the 3rd Brigade is an example of one particular genre in writing historical accounts. Antony Beevor and Frank Furedi (The Great War Collection) are two writers who have written about similar subjects, but whose writing styles, being analytic and interpretive, are vastly different. Wahlert’s prose and choice of language are essentially matter-of-fact and unemotional. The events are simply noted, almost in diary style, with little or no embellishment. Wahlert has recorded events commencing in post-Federation Australia and concludes with the recent conflicts and operations in East Timor, Iraq, Afghanisatan, Fiji, Somalia, Rwanda and PNG/Bouganville.
The History of the 3rd Brigade includes maps, high-quality colour photographs of diggers in situ depicting the mud and trenches of WWI to the desolate and remote areas of Uruzgan Province; and descriptions with technical details of the No. 5 Mills bomb, the single shot Martini-Henry rifle, the German Mauser, Gewehr 98 rifle, the German 15 cm SFH13 heavy howitzer, the cloth colour patches of the AIF, the Parker Hale sight, the Stokes mortar, the Lewis Gun and the Thompson sub-machine gun.
Occasionally, Wahlert comments on questionable decisions made by senior military and Defence personnel. For example, he describes the difficulties experienced by 3rd Brigade officers when they were about to be sent to troublespots and higher authority wanted to maintain secrecy for political reasons. Wahlert describes the situation when troops were suddenly ordered to troublespots and little provision had been made to equip them with the right equipement, weapons or back up. In another example, he describes how after a hasty departure for one troublespot, RAAF planes, with 3rd Brigade soldiers on board, had to return to base because some of the Land Rovers being transported were spilling petrol inside the aircraft. In another situation, when a joint Australian/New Zealand (ANZAC) force went to one trouble spot, the senior officers of each force interpreted their orders differently.
Many of those mentioned in the text will be known to the readers of the RUSI Newsletter which adds greatly to the over-all interest. The History of the 3rd Brigade is factual and rich in detail. In Operation Plumbob involving JTF 633, illustrating the diverse range of duties 3rd Brigade was expected to perform, baby formula and nappies had to be flown to HMAS Tobruk during the evacuation of Australian civilians. AJP Taylor has argued ‘the duty of the historian is to clarify these assumptions and to trace their influence upon the course of every-day policy’. This Wahlert has accomplished in masterly fashion. The History of the 3rd Brigade is another excellent and valuable addition to the RUSI library.
The Royal United Services Institute of Victoria Library thanks the publisher for providing a copy for review.
Reviewed by Michael Small, January 2016 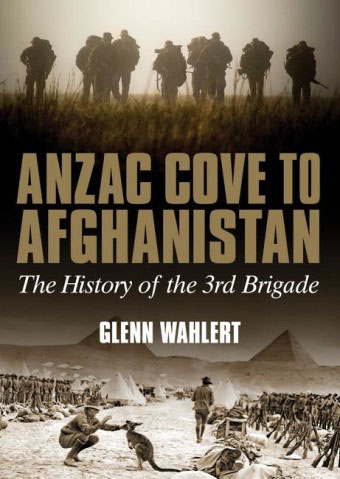