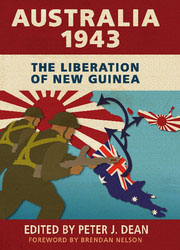 ‘Australia 1943 – The Liberation of New Guinea’ follows ‘Australia 1942 – In the Shadow of War”; both being edited by Peter J Dean. The 1942 battles with the Japanese in the South West Pacific, particularly those along the Kokoda Track are well known to Australian readers, but the subsequent fighting in New Guinea is less familiar.

By early 1943 the direct threat to Australia had passed and the Allies now had to isolate and neutralize the major Japanese headquarters and base at Rabaul in New Britain. This was necessary for General MacArthur to continue the advance towards the Philippines, and involved eliminating Japanese held areas on the north coast of New Guinea and preventing their reinforcement.

The liberation of New Guinea required the greatest concentration of Australian armed force during World War II: five army divisions, and a large part of the RAN and the RAAF. Peter Dean has written the introduction and a chapter on ‘MacArthur’s War: Strategy and Plans for the 1943 Offensives’. Eminent historians have written ten other chapters on strategy, US Operations, Japanese Strategy, the RAAF and RAN operations and the Australian role in ‘Cartwheel’, which was MacArthur’s code word for operations by New Guinea Force to successively capture Lae, Salamaua, Finschhafen and Madang. Some of the most dramatic events of the campaign, such as the 2/16th Battalions capture of Shaggy Ridge, the airborne assault on Nadzab and the total destruction of a Japanese troop convoy by RAAF and US aircraft in the Battle of the Bismarck Sea are described in highly readable detail and with maps and photographs.

Many military books have been spoiled by too few or inadequate maps, but this is not the case here as the maps and charts are excellent. There are also chapter endnotes and useful organization charts and a chronology of major events in the South West Pacific Area (SWPA) and in the South Pacific Area (SPA).

All aspects of the fighting are covered, including logistics, amphibious and airborne operations and the difficulties faced by Prime Minister Curtin in dealing with General MacArthur, Supreme Commander SWPA and General Blamey, Commander Allied Land Forces and Commander New Guinea Force: both of whom had direct access to the prime minister. US ground forces in the SWPA were deliberately organized as a separate task force under Lieutenant General Krueger to remove US troops from General Blamey’s command.

The capture of Madang and Alexishafen in April 1944 marked the end of the coalition partnership between Australian and United States ground forces, as General MacArthur was determined that the liberation of the Philippines would be by United States forces alone, and by early 1944 Australia was effectively left to reduce the remaining Japanese forces in Western New Guinea and Borneo.