Australia 1944-45: Victory in the Pacific by Peter Dean – Book review

This is the third and final volume of works edited by Peter Dean concerned with the Australian contribution to the war in the South-West Pacific. Designed ‘to bring together the themes from the first two books’, “Australia 1944-45”, like its predecessors, covers a broad ranging canvas from war and operational strategy to intelligence and combat operations, conveyed through chapters written by a fine cast of mainly Australian academic historians, but includes Americans Daniel Marston and Kevin Holzimmer and Japanese Hiroyuki Shindo. It is also an intertwined tale of frustrations and controversial campaigns, after Douglas MacArthur, Commander in Chief (CinC) South-West Pacific Area (SWPA), sidelined the Australians, denying them a part in the re-conquest of the Philippines, and directing instead that they clear the by-passed Japanese from northern New Guinea, Bougainville, and New Britain, followed by the amphibious landings in Borneo.
Delivered thematically in six parts embracing 15 chapters, the authors deliver snapshots of the various issues confronting Australia and the contributions the nation made in the final years of the Pacific War; in doing so they provide an excellent primer for those wishing to delve further into the subjects addressed. Free of the usual hubris and mythology associated with much of Australian ‘popular military history’, we are presented with pragmatic analysis placing the Australian contributions in the political and strategic context of a minor ally with its own national interests, and cascading down through the all important issues of intelligence, training and logistics to the campaigns fought in the last 18 months of the Pacific War. A theme running through many of the chapters is that while willing to contribute its fair share of the burden, a minor ally’s strategic interests will always be subverted to the needs and ambitions of those of the big and powerful, despite what the country’s politicians and military leaders may wish and argue for.
Thus Part 1 leads off with a splendid discussion of Australia’s war strategy, highlighting how little impact Curtin had on the British and American leaders, followed by an equally fine study on the military strategy that saw the Australians relegated to a minor role, after they had borne the brunt of the fighting in New Guinea in 1942-43. Balancing these is an informative narrative of Japanese strategy and operations in the SWPA, a chapter that could have been improved with a more judicious editing of a rather repetitive style. Part 2 addresses two diverse topics: a wide ranging consideration of Australian prisoners of war, and a study of the impact of the war on the Home Front, both making a social commentary on the impact of the war upon the Australian community.
The remaining Parts are concerned with the waging of war in all its facets: training, intelligence, special operations, logistics, amphibious warfare, and fighting, including a chapter each on the RAN, the RAAF, and each of the campaigns and amphibious landings. Each is written with candour, highlighting strengths and weaknesses, success and failures, infighting and cooperation, warts and all. Starting from a non-existent or very low base in 1939 one is struck by the very considerable developments in Australia’s intelligence, naval, military and air capacities that, by 1945, saw the largest forces the country has ever committed to operations, and which formed the basis of existing post war capabilities. Underpinning these capabilities, for the Army at least, was thorough training and the development of doctrine based on experience in earlier campaigns, that enabled them to outfight the Japanese in jungle warfare, and deliver the most complex amphibious operations ever undertaken by Australians.
Nonetheless, the authors acknowledge that the delivery of these capabilities to the battlefield depended very much on the enormous amphibious capabilities and logistic support supplied by their American ally, and at the behest of MacArthur and his principal commanders. Furthermore, although the operations themselves were planned and led by the Australian commanders, these commitments were directed by their powerful ally, under whose overall command they were under, leading to the frustrations of the RAAF, the Army and to some extent the Government, at being sidelined from the main game. It underpins the view that if there ever was an Australian way of warfare it is to wage war as a junior partner under a powerful ally.
While others have regarded the Australian’s final campaigns as ‘an unnecessary war’ those authors writing on them in this book, and on the strategic context, mostly disagree, pointing out they were conceived at a time when the war was expected to continue into 1946 and beyond. More importantly, they argue, with varying degrees of persuasiveness, those fought in New Guinea, New Britain and Bougainville had imperatives associated with Australian national interests which could not be ignored, while those in Borneo were part of a longer term strategy to free the Dutch East Indies and Malaya. Their chapters reinforce the view that history based on narrow considerations, and the casualty count, simply distort the wider historical context leading to myths and incorrect conclusions.
The only criticisms are that some chapters would have benefited with editing to provide a more flowing style, and there is a paucity of good maps. Those provided are sparse, and while they give an overview of each campaign, they lack the detail to match the quality of the written word, and are bundled together rather than supporting the chapter they refer to. Notwithstanding this, “Australia 1944-45” delivers a balanced, erudite and comprehensive overview of the nation’s concerns and commitments in the closing two years of the Pacific War, with lessons that are relevant to Australian political and military leaders today. It is a worthy successor to the previous two volumes. 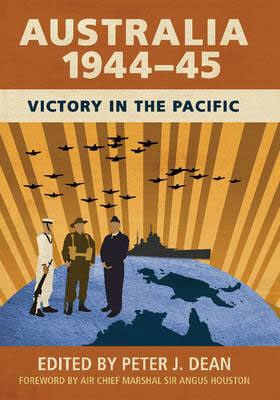 By Robbo on Amazon.com