The Battle of Fromelles is the worst 24 hours in Australian history claimed historian Dr Ross McMullin. In that short battle there were over 5,500 Australian casualties, more than the totals of the Boer, Korean and Vietnam Wars put together. This little known disaster arose from the worst excesses of British Command and was little known because it was covered up.

Dr McMullin gave a lively engaging presentation at MHHV’s monthly speaker program on 13 July 2016 explaining how, in July 1916 just over 100 years ago, two divisions, one Australian and one English stationed at Fromelles came to be mauled for no gain.

Fromelles was a quiet area considered to be suitable as a nursery area well away from the main action which was then being bloodily waged on the Somme. Commanding General Sir Richard Haking hankered to get into the fight and reasoned he could be both relevant and grab some honours if he put in an attack at Fromelles to prevent the Germans transferring men from there to the main battle on the Somme. The problem was that Haking was a lamentably poor planner and tactician. The paucity of his thinking was exemplified by his pre-war book which espoused the primacy of morale over modern weaponry and just about everything else and the belief that in any engagement the attacker had the advantage over the defender. These incredibly dangerous views were still widely held in 1916 despite experience of nearly two years of war proving the reverse. His unscientific views had the incredible personal advantage that he didn’t have to plan much as morale was a quality inherent in the men and so when things inevitably went wrong the soldiers could be blamed. It was under this commander that the unfortunate diggers were destined to fight. Needless to say, with such an ambitious woolly headed thinker at the helm, plenty could and did go wrong.

Planning was predictably sloppy. No-mans’ land was too wide (400 yards instead of 200), there was a heavy concentration of machine guns situated on a large German concrete strongpoint named Sugarloaf. Worst of all, the Germans could see down over the whole British position and knew exactly what was going on and prepared accordingly.

Australian Brigadier General “Pompey” Elliott was desperately concerned and tried to have Haig intervene but to no avail.

Softening artillery fire by the British caused retaliatory fire by the Germans. The British artillery, such as it was, was ineffective and Sugarloaf remained unscathed and in action when the assault began on at 6pm 19 July 1916. Disaster was inevitable. “The 59th and 60th Battalions advanced in four waves five minutes apart. Each line surged forward to be cut down in its turn.” The scenes of devastation and butchery were all around. Men were cut in half by enfiladed machine-gun fire. Many lay screaming in the mud. The 60th Battalion in particular had sustained more casualties faster than any other in the whole war as they were forced to attack across enfilading machine-gun fire from Sugarloaf. The other battalions and the British suffered but got of more lightly. Some of the troops got over the first line of German trenches only to discover that the supposed next line was merely a set of drains and no protection at all. With the hard won forward position untenable, they were forced back through the German machine-gun fire for a second dose of destruction.

Elliott went forward and spoke to all he met and then went back to his HQ and sobbed with grief.

Another attack was ordered for 9.30pm with the Australians ordered to support an advancing British flank. The Australians went off on time and suffered more casualties only to discover the British weren’t there. The assault had been called off but no-one told them.

At the end of the day, there were just over 7,000 casualties and losses of which around 1,500 were British and the remainder were 5,500 Australian.

The added tragedy was that nothing was achieved. Since the Germans could see the whole setup, they were never fooled into believing they were in danger so didn’t bring back men from the Somme to reinforce the position. They rightly judged that they could defend the position with the light force they had. Their casualties were around a quarter of that sustained by the men under Haking’s “command.”

Elliott was particularly embittered about the whole sorry affair and years after presented a scathing critique outlining ten tactical mistakes. Haking wrote a report that predictably shifted the blame onto the soldiers claiming they “lacked fighting spirit.” Commander of the British Expeditionary Force, Field Marshal Douglas Haig sought to promote Haking but that was refused as Haig himself was losing power and influence due to the disasters he was responsible, disasters arising from his own adherence to the same wrongheaded principles held by Haking. Apparently Haking was one of the few generals to be called “butcher” during the war.

Dr McMullin peppered the talk with anecdotes about the unfortunates involved. He presented several mini biographies of young men whose potential was a loss to Australia and a devastating tragedy for their mothers and fathers – a tragedy that many parent didn’t recover from. 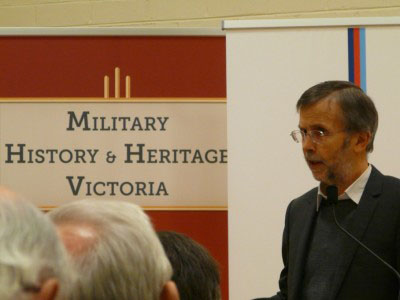 Ross McMullin is the author of an award-winning biography of Pompey Elliott, whose Victorian brigade suffered devastating casualties at Fromelles. His most recent book, Farewell, Dear People: Biographies of Australia’s Lost Generation, was awarded the Prime Minister’s Prize for Australian History.