Sitting unobtrusively astride the front entrance stand two black beasts of war. There was time when they were prized weapons in chaotic massed infantry and cavalry battles of the 19th Century. They spewed out cannonballs that decimated the ranks advancing towards them. But these two guns were captured at great cost and now rest as silent sentinels to battles past. 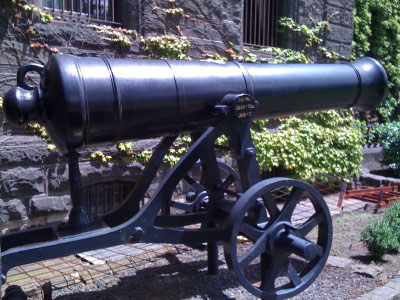 The pair of cannons flank the central front entrance of Victoria Barracks in Melbourne. They were once part of Tsar Alexander the First’s army campaigning in the Crimea. And yet, most passing Melburnians would have little appreciation of how these weapons came to be a feature on our daily landscape.
Their story can be traced through the strange markings on the cannons themselves. Cyrillic lettering reveals that they are 36 pound cannons that were cast in 1838 at the Alexander Factory. The Alexander Factory was established in Petrozavodsk in 1765 and in 1838 the director of the Factory was John ‘Ivan’ Armstrong – a native Scot employed by the Russian Admiralty. John’s father, Adam Armstrong, had also been the director of the Alexander Factory for 12 years until 1818.
The two cannons now at Victoria Barracks were originally manufactured for the Russian Navy which underwent a significant expansion at in the early 19th Century.
We can safely assume that the cannons were supplied to one of the major Russian Navy fighting ships, but unfortunately there are no records available to indicate which ship they were allocated.
In the defence of Sevastopol in 1854 and 1855 the Russians scuttled eight major war ships to protect the harbour. Nearly 700 ships cannons from these warships were removed and became additional artillery located in defensive redoubts around Sevastopol. The ships were Grand Duke Constantine, City of Paris (both with 120 guns), Brave, Empress Maria, Chesme, Yagondeid (84 guns), Kavarna (60 guns) and Konlephy (54 guns).
In early 1855, after a protracted siege and series of battles, the British and French forces finally overcame the Russian defenders at Sevastopol. The outcome of this battle contributed substantially to the Russians ultimate defeat in the Crimean War.
Over 4,000 artillery pieces were captured in the fall of Sevastopol. In celebration of the victory it was decided to distribute a pair of cannons seized at Sevastopol to each of the most important cities in the British Empire – including Gibraltar, Quebec, Dublin, Auckland and Melbourne.
The castabels of several captured Russian cannons were removed and recast into Victoria Cross medals. The first Victoria Cross was awarded by Queen Victoria to each of 62 recipients at Hyde Park in London on the 26 June 1857.
In 1858 four pairs of captured Russian cannons were dispatched to Australia. It is not clear what their journey has been over the last 150 years, but one pair are presently located in Centennial Park in Sydney and another are on the Torrens Parade Ground in Adelaide. One cannon now stands outside Anglesea Barracks in Hobart and its sister in City Park in Launceston.
So, the next time you walk past the two black beasts of war in front of Victoria Barracks reflect for a moment on their history and the heritage they provide to Victoria.