The Victorian Navy came into being in 1855 when Her Majesty’s Colonial Ship (HMCS) Victoria was manned for the delivery voyage to Australia. This article just scratches the surface of a fascinating aspect of Victoria’s naval defences. 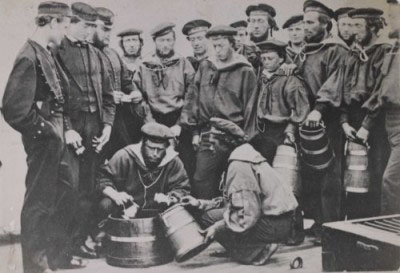 Thomas (squatting) & other crew members of HMCS Victoria
receiving their rum ration ca 1861.
Photo from the State Library of Victoria, Picture Collection.
It is difficult to know how many black men served in the Victorian Naval Forces as race was not considered important enough to be recorded. We therefore have no records of the permanent Victorian Navy that indicate whether men were black, white or Asian. Names generally indicate if someone is of Asian background but not so for black men. Fortunately we do have some images of men which indicate that they were black.
The colour of James Jasper’s hand, face and neck in the engraving below, suggests that he was black. Throughout the newspaper coverage of a torpedo accident involving Jasper,* or in the subsequent inquest and the aftermath, no mention is made of James Jasper’s ethnicity. On the contrary, Lieutenant Houston was described as “a native of the colony” most likely because he was born in Victoria. 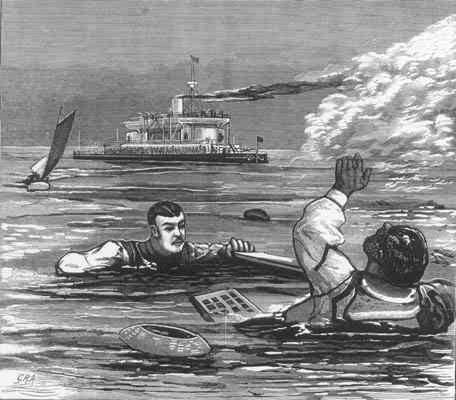 Naval Brigade/Reserve (Part Time Naval Force)
In 1860, on the creation of the Sandridge division of the part time Naval Brigade, an un-named black man attempted to enrol in the Naval Brigade but the local magistrate refused to take his oath. After being sworn in by a less prejudiced magistrate, the man’s case was published in the Argus paper on 6 November. Above the signature of “poor Sandridge Darkeys” the man in question’s case was put as:-
“….do you not think, Sir, that we have greater reason still to be proud of ourselves, and of our local magistrate, who refused to swear into the ranks of our naval brigade a man, every inch of him-honest, sober, industrious, a native of bonnie Scotland, parents British subjects; but, here it is, his skin is black?”
That racial prejudice existed in 1860 is not that surprising, but it is worth noting that there were no institutional barriers to a black man joining the Victorian Naval Brigade.
Although records for the Naval Brigade from 1859-71 do not hold any relevant information, the Victorian Naval Reserve Register covering the Naval Reserve (1871-85) and the Naval Brigade (1885-1901) often lists the individual’s complexion and eye colour. From records in which this information was entered we can identify over thirty men as being non-white on the basis that they either had black or dark complexion as well as black or dark eyes. One such man was Harry Moore, aka Black Harry, who was described in the register as having dark complexion and dark eyes. Harry was described in the press as a coloured man. The Register also indicates that the rate of pay was the same for men regardless of their colour. 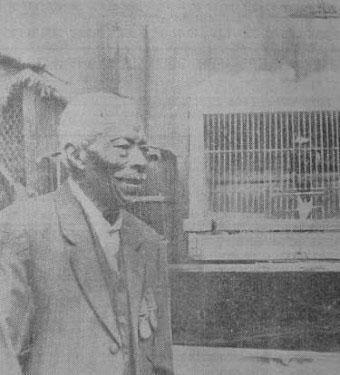 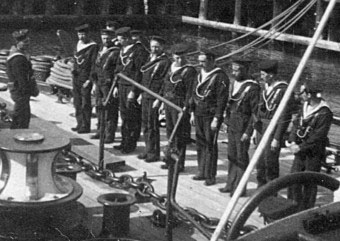 Men from the Naval Brigade parade on board HMVS Cerberus in 1896.
Third from the right is a non-European, possibly of aboriginal descent.
Photo W. R. Grimwade on 19 September 1896 and used courtesy of University of Melbourne Archives.
Whether or not there was a limit as to how high a black man could be promoted is not known. However, it is known that on Captain Fullarton’s retirement, after having been in charge of the Naval Brigade for the previous 29 years, he described Harry Moore as having been “his right hand man”.
More details on the above are available at http://ww.cerberus.com.au/non-europeans.html
The author is interested in any information regarding non-European men serving in the Victorian Naval Forces.
*While positioning a torpedo (sea mine) from a ship’s boat in 1881 a premature explosion occurred killing five of the six men on board the boat.