Lieutenant Colonel David Millie is an esteemed Friend of the Fort.  Apart from being President of the Queenscliff Point Lonsdale RSL, he is a personal friend and an army colleague. We were classmates at the Royal Military College, Duntroon, Canberra from 1956 to 1959. He and Eva have just recently returned from 10 days in the USA where David ‘launched’ his book “Team 19 in Vietnam.  An Australian Soldier at War”.  David was a guest speaker at the national conference of the Association of United States Army in Washington DC.

In 1968 – 69, David undertook a tour of duty in South Vietnam as a Major, where he was a member of the renowned Australian Army Training Team Vietnam, Australia’s most highly decorated unit in that war.  In the preamble of the book, David explains that the diary of his military service in Vietnam had lain in the drawer of his desk for over 35 years.  With the passage of time and in light of the events that had overtaken that country over those years, he realised that he had a duty to present the events of that controversial war, as he saw it, in a readable form. And this is what he has done.  David, very succinctly presents  (as he puts it) the daily routines, the excitements and the disappointments, the moods and the reflections of a field staff officer working with his American allies in support of the Republic of Vietnam forces and the peoples of South Vietnam in Quang Tri Province.  Quang Tri butted up to the demilitarized zone (DMZ) and North Vietnam’s access routes into the South.  It was a busy place.

David’s book is an outstanding, scholarly work.  He explains in Chapter 1, that he was assigned for duty with Military Assistance Command, Vietnam (MACV) Advisory Team 19.  The first four months of his tour were spent as a district senior advisor; and for the next eight months as a planning and operations staff officer at province level.

In reading the chapters of this book and following events, both military and civil, that filled his twelve months’ tour, I was overwhelmed by the amount of detail that David recorded in his diary and in his letters to Eva.  To recall the details so long after the events and to explain the implications on the ‘big picture’, and to comprehend the influences that the events had on operations is an amazing scholarly art.  In my tour of duty in South Vietnam in 1966 – 67, I served with an American Regiment, so I can understand the sensitivities that David experienced serving with ‘another Army’.

Clearly, David made the transition and adapted very quickly to the ‘American system’, as he was advanced to positions of authority, responsibility and influence as the tour progressed.  I was in awe of some of the levels of regular decision making that David went through for such a reasonably young and, thus far, inexperienced-in-war officer.  His meetings and conferences with the most senior American and Vietnamese officers must have been a great experience for him.

“Team 19 in Vietnam” is very well written and is easy to read for a military reader.  For the layman, there could be a difficulty understanding the anagrams and the military terminology, but there are Appendices to spell these out.  David is a very experienced and highly trained Army officer and this work reflects that experience and training.  The book is hard-copy; 363 pages with appendices and notes.  There are maps and photographs.  The publisher is University Press of Kentucky, Lexington, Kentucky, USA; and has a Forward by General Gordon R Sullivan US Army (Retired).

For the student of the military involvement in the war in South Vietnam, all those years ago, I strongly recommend this book.  It gives an excellent overview and account of events that occurred in one province of a country that was wracked by wars for such a long period of its history.

For his service in South Vietnam, David Millie was awarded the Imperial Honour – Member of the Order of the British Empire (MBE) (in 1969), the Bronze Star for Service (USA) and a Cross of Gallantry (with Bronze Star).

A website has been created at www.team19vietnam.com Where to buy is included as a page on the website. 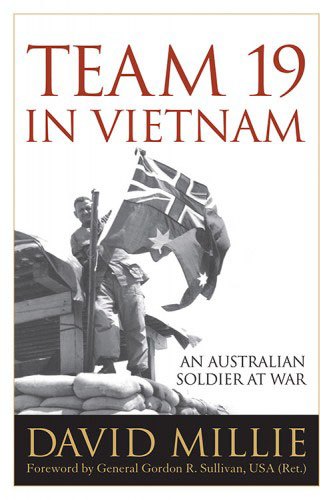