Don Bradman could cut you with his tongue as sharply as he could flash a ball to the boundary with his bat. In 1934, the night before he was to bat in the vital Fourth Test at Leeds, he dined with English cricket writer Neville Cardus, who was a fifth columnist for his country’s team, especially when the Ashes were at stake. In a blatant bit of psychological warfare, he told Bradman that he would not make a triple century as he had done in the previous Ashes Test at Leeds in 1930.
‘Why not?’ the Don asked him.
‘Because it’s against the law of averages.’
‘I don’t believe in the law of averages,’ was Bradman’s swift reply.
He made 304, defying Cardus, England and that law which only Bradman, in the history of all sport, could make a mockery of. John Monash, too, was master of the riposte. 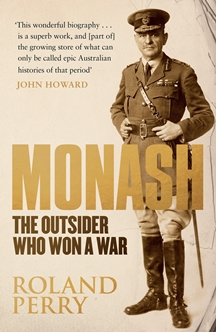 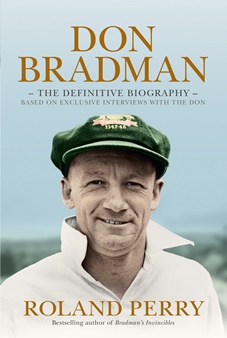 In late 1930, a group of Sydney businessmen and extremists led by major general Grimwade, reckoned the mighty WW1 Commander would make an excellent dictator ‘like Mussolini.’

Throughout the 1920s Monash stood between anarchy and the democracy. He had put his life on the line for over four years on several war fronts from Gallipoli to France. He wrote an eloquent letter of rejection, ending it with a line of pure logic and brilliance:
‘If it be true that many people in Sydney are prepared to trust to my leadership, they should also be prepared to trust to my judgment.’
Game, set and match.

These dashing knights were both prolific letter writers. Bradman was the king of the one pager; even the one paragrapher. He got to the point with laser-like precision. He had to be sharp. He received 400 letters a day, responding to the ‘sensible ones,’ about eighty a day, writing at the rate of three minutes a letter. Bradman was Australia’s best ever communicator.

Monash was no slouch with his output either. There are 75,000 of his letters on file at the National Library Canberra. He also produced copious diaries, making him a biographer’s dream. Monash liked to let them flow. He was gifted at description, which had much to do with his eclectic mind. He knew a lot about a lot of things. When he came to describe the flora, fauna, architecture or history on his travels, or simply the look of the women in Paris, he did it with verve. His war letters should be a national treasure. By any measure, John Monash was a beautiful writer.

He and Bradman had poor but stable upbringings. Don was the son of a Bowral carpenter, but never walked on water as some have alleged. He was bright lad, who left school at 14 and joined a real estate company, which later employed him in Sydney.

Monash was born in Australia the son of a German Jewish merchant, Louis, who immigrated to Victoria in 1853, just after the peak of the goldrush. He struggled in Anglo-Celtic Australia. Like Bradman, young Monash showed certain intellectual gifts, and went on to obtain three university degrees in engineering, arts and law.

Bradman’s country boy background made him an outsider who had to prove himself. When rejected by all Sydney grade clubs at age 18, because the 8 shillings and six pence (85 cents) round rail fare from Bowral was beyond the means of those teams, Bradman told his father without rancour:
‘I’ll just have to prove I’m worth ten bob to somebody.’

Monash suffered all his life from his outsider status. The critical moment occurred when he decided at 49, to volunteer to fight against Germany in 1914. The parallel today would be if a Muslim General with Indonesian parents took charge of the Australian Army in a war against Indonesia. Every part of his life, his relatives, friends, travels and background would be scrutinized like no one ever before. Except of course Lieutenant General John Monash, a Jew born in Australia of German parents. He took command in mid-1918 of the Australian Army fighting Germany. There was a committed effort to relieve him of his command before he ever went into battle.

Both he and Bradman were shaped by Depressions. Monash ran into a building slump in the early 1890s when he was a young building engineer starting out. It led to panic and a run on Melbourne banks. After that he struggled in his business life, taking on petty extortionists, harassing debt-collectors, corrupt councilors, crooked judges, unprincipled patent agents, embezzling mine managers and merchants of tease and promise. Monash won through by the time he was forty and was a wealthy man. But the battle left him with a sorry maxim: ‘Assume every man is a rogue till he is proved honest.’

The 1929 Great Depression saw Bradman’s real estate firm go belly-up and he contemplated joining the long lines of unemployed in Sydney. But he found work in a sports store so he could go on entertaining for his club, State and country in front of packed houses.

These two Australian icons of the 20th century learnt how to handle the British. Bradman, at 21, smashed 974 runs at an average of 139.14 in just seven Test innings in England in 1930. The British feted him, just as they did Monash in 1919 after he proved to be the finest Commander on the Western Front. In the next Test series in Australia in 1932-33, the English had a secret weapon—Bodyline—to bring Bradman down. It halved his average but it was counter-productive from England’s point-of-view. Bradman came back and back at the old enemy, making them pay for the rest of his career. It took England 20 years to regain the Ashes after the Bodyline series.

Revenge was a strong motivation for Bradman, as it was for Monash. On Gallipoli, in Flanders and on the Western Front, he was frustrated by the brutal way the British officers used his men as cannon-fodder with hare-brained schemes on the battlefield. After one battle on Gallipoli, in which he saw his 4th brigade decimated, Monash was told by his British superiors in a derisive way to ‘produce more men’ as if they could be grown on those treacherous cliff-faces. He was devastated but decided to fight to take charge of all Australians on the Western Front. Before Monash took command in mid-1918, Australian divisions were tacked onto losing British armies without a sense of identity. He brought them together to fight as one entity under an Australian flag. In some ways, he became a rogue warlord when his army of 200,000 diggers began winning battles. He continued ‘to feed the troops on victory.’ With success came power. In the last weeks of the war he began defying orders and became forceful dealing with his immediate superior, General Sir Henry Rawlinson, and others, to get his way.

After long and successful business careers—Monash in engineering and creating Victoria’s State Electricity Commission, Bradman as a stockbroker and investment adviser—both developed as shrewd administrators. Late in the war, 118 diggers were charged with mutiny after they were asked once too often to take over the line from British forces that had failed to win a battle. The mutineers’ divisional commander, major general Glasgow, wanted them jailed or executed. Monash told Glasgow to leave the paperwork with him. It sat on his desk until the war ended seven weeks after the incident. Monash took over repatriation of the army and was replaced by major general Hobbs as commander. Monash told Hobbs it would a humane act to pardon the 118 diggers sitting on death row. Hobbs obliged his former commander. The diggers were pardoned.

Bradman was known to act with similar compassion. In 1974, when Test player Terry Jenner was asked for a ‘please explain’ letter for his criticisms made in the media about selection, Bradman told him to write to the then ACB after 4 June. The then chairman of the ACB would be at an ICC meeting in London. Bradman as acting chairman accepted Jenner’s explanation and did not impose a penalty on him.

Other pertinent similarities between Monash and Bradman included their humour, integrity, obsession with detail, prodigious memories, leadership skills, and patronage by the Royals—particularly King George V. They were also both anti-racist yet conservatives. Bradman stopped the all-white South African cricket team from touring Australia in 1971 making an official one-line statement to the media: ‘We will not play them until the choose a team on a non-racist basis.’

With such opposition, apartheid’s days were numbered.

In early January 1929 Monash saw Bradman make a century in his first Test innings on the MCG. Yet these towering figures in Australian history never met. It’s a pity. Their parallel lives, ideals and values suggest they would have had much in common. They were book-end representatives of Australia’s finest generations that endured and overcame more adversities than others, including world wars and depressions.