Between 1900 and 2014 over 4,000 Australian naval people received honours and awards for their efforts, courage, sacrifice and service to the nation. Whether a George Cross for defusing mines during the World War II UK ‘Blitz’, an American Silver Star for flying helicopters into intense enemy fire in Vietnam, a Distinguished Service Medal for the Iraq War or a Conspicuous Service Medal for quietly ‘just getting the job done’, Bravo Zulu recounts the stories of the men and women recognised for their Royal Australian Navy service. Some give insights into running of our Navy; others recall inspiring feats of courage under fire or bravery in risking their lives in saving others, on and off duty.

For the past seven years Ian Pfennigwerth and a team of dedicated volunteer researchers have explored the background of these honours and awards – Imperial, Australian, and foreign. The book is written so that no knowledge of things naval is necessary to appreciate the significance of each award while becoming acquainted with the history of Australia’s naval forces – and enjoying a good read. Volume 1, covering the period 1900 to 1974 has now been released and it will be officially launched by the Chief of Navy.

With almost 800 pages, 24 maps and 250 illustrations, through the recipients’ stories the book traces the formation and development of the RAN, its fortunes during World War I, its resurrection from the depths of the Depression, and its fine fighting record during World War II. Post-war the stories tell of our Navy’s growth toward independence, the exploits of its men in Korea, Malaysia, Indonesian Confrontation and Vietnam, and its development of ships and weapons system like the famous Ikara anti-submarine missile. There are also stories about the loss of Voyager and of spectacular feats in naval flying and diving. The 74-page Index of recipients of honours and awards links each award to the text.

Reader comments have been extremely positive:
‘Congratulations on an outstanding piece of research. I enjoy very much going through the volume. The Naval family is in your debt’.
‘Superlatives do not do justice to Volume 1: I am more than impressed’.
I’m utterly overwhelmed by “Bravo Zulu” – grand in concept and splendid in execution. Heartiest congratulations’.

Bravo Zulu Volume 1 comes in two editions; the hardcover retails for $75 and the paperback sells for $65. Postage is $13.00 for domestic purchasers. Overseas postage rates depend on the purchaser’s delivery address. The book is available through the author’s website at www.nautilushistory.com.au.
Volume 2, covering honours and awards to December 2014, is expected to be released in mid-2017. 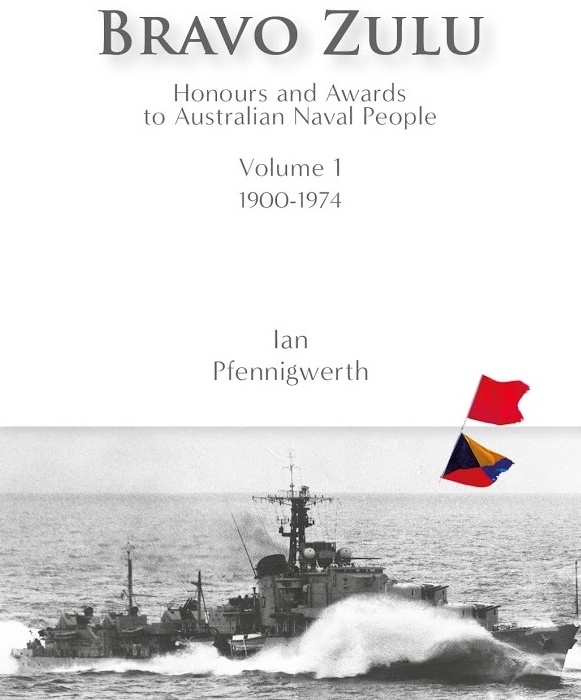