For over a century National Service, or Conscription, has often been part of the Australian Army mix…

In fact since World War Two, almost 300,000 young Australian Nashos have fulfilled an obligation to serve our country, in both peace and war. The sacrifice of many has been ignored.
In both world wars the initial fighting force sent overseas consisted of volunteers, not Conscripts. Gisborne newsagent Jim Sumner, who was killed in action at Pozieres in 1916, was just such a volunteer. He was not compelled to enlist. He chose to join up. Other volunteers died at home in Australia. Patrick Cooney, a Light Horsemen from Richmond succumbed to pneumonia in a base hospital in Fremantle. Like Jim Sumner, his supreme sacrifice is recorded on the Australian War Memorial, and other official honour rolls of the fallen.

Although there was a form of conscription used during World War Two, it was only the early volunteers, like Cohuna resident Bill McGlone, who could be sent overseas to fight. McGlone died beside his anti tank gun, trying to stem the Japanese advance down the Malayan Peninsular in January 1942. Fred Smith left a successful farm life behind. He didn’t have to, but he offered his services to fight in early 1941. Fred died in an aircraft training accident in Western Australia before he could see any action. Like all the servicemen and women who died in World War Two, Pilot Officer Smith’s name is among those on the Australian Roll of Honour and Commonwealth War Graves listings.

Sixty years ago, in 1951, a new Conscription scheme was introduced for all 18 year old men. This scheme of Compulsory Military Service, provided for enlistment in the Navy and the Air Force, as well as the Army. Men like George Hellyer, from Oakleigh, received their Call-Up Notice in the mail. Then followed recruit training at Army camps such as Puckapunyal. After three months the newly trained Conscripts were released, to undertake several years Part Time or Reserve service. Although they had been forced to enlist, these men were not sent to any war zones. Roger Wood from Box Hill was a young soldier from this conscription era. After basic training he commenced his Part Time commitment with the Melbourne based 2nd Commando Company. He lost his life in Port Phillip Bay, during a hazardous, Army watercraft training exercise. By the time the Scheme finished in 1959, over 50 young men, like Roger Wood, had died whilst serving in Australia. Their names are not to be found on any official rolls of honour.

In the 1960’s another, more contentious National Service scheme was introduced. From 1965 some young men, like Bruce Sedgman, were selected on the basis of a ballot. Those selected were obligated to serve up to 2 years in the Regular Army. For the first time, Australian Conscripts were compelled to swell the Regular Army ranks of volunteers on Active Service, and thousands were deployed to Malaysia and South Vietnam. Battle casualties among the Conscripts soon followed. Arch Williams was killed instantly by a sniper in Bien Hoa Province, South Vietnam. Newly married Mildura man Ramon Deed, was another. He died of wounds after an anti personnel mine was accidentally triggered in 1967. Arch and Ramon are among the 212 Conscripts or, Nasho’s as they are often called, who died on Active Service in South East Asia. Their names are recorded on the nation’s honour boards at the Australian War Memorial, and elsewhere. 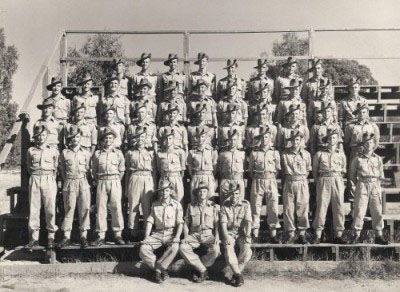 On the other hand, consider David Andrews from Ascot Vale. He was drowned in Queensland’s Coomera River, whilst undertaking rugged battle training at Canungra’s Jungle Training Centre, only weeks before being sent to South Vietnam. Think also of PMG technician, Signaler David Brett from Wangaratta who succumbed to a sudden illness at Heidelberg in January 1968. Even though more post World War Two Nashos, like David Andrews and David Brett, died in Australia, than on Active Service, their names are not listed on the nation’s honour rolls.

Many saw the National Service scheme of the 60’s and 70’s as unfair. This was because only some young men, of age 20 were selected by ballot to serve. Bruce Sedgman for example was the only man known to have been selected from his football team. With a promising legal career in the Crown Law Department put on hold, Bruce left his family behind in 1967, and was sent to Puckapunyal to learn the basics of soldering. After recruit camp Private Sedgman satisfactorily completed Infantry training. Next he was transferred to the 1st Division in Brisbane as a Rifleman. Bruce died, near Canungra, in a vehicle accident on 15th July 1968. No official recognition of Bruce Sedgman’s service and sacrifice, is known to exist. Apart from the initial Defence telegram and condolences, his family to this day have received little information on his fate or indeed his service.

Hundreds of young National Servicemen in the 1960’s and 70’s died whilst serving in a wide range of circumstances. Motor vehicle and training accidents were common. Many lives were also lost to various types of sickness. Former Brunswick clerk Frank Chiappazzo died when the bridge construction task he was employed on, collapsed and caved-in, at the Army Engineering School near Sydney.

Even though they were not on Active Service, some National Servicemen died overseas as well as throughout Australia. Dick Simpson, a farm hand from Carlton, died suddenly from a mysterious illness in Port Moresby. Others died elsewhere in New Guinea and Singapore. These men did not die in a war zone. But unlike their forefathers who died in similar circumstances in both World Wars, they are not publicly recognized for their service and sacrifice, nor are they commemorated on any honour rolls.

With increased public resentment towards National Service, and growing battle casualties in South East Asia, the scheme was finally scrapped in 1972. Too late though for David Belyea from Camperdown, who was fatally injured by an Army forklift truck near Brisbane. Even now, there is still little applause for those who answered the call as Conscripts after World War Two, and especially those who died while serving.

With the news of losses among Australia’s Defence Forces both at home and overseas in Afghanistan and elsewhere increasingly commonplace, it is timely to remember those who fell in yesteryear. With such little attention paid to our fallen National Servicemen, we should pause to remember the 500 of their number who gave their lives whilst serving Australia. We should remember in particular, those Nashos who died serving, far from any battlefield, but who might otherwise, be forgotten. 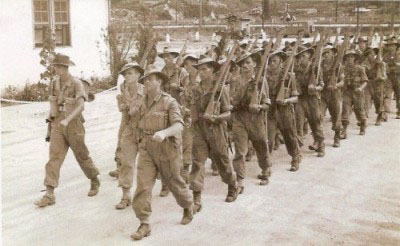