Diggers in the Nam – A photographic exhibition by Tim Page.

MHHV > News > Diggers in the Nam – A photographic exhibition by Tim Page.

Twenty year old photojournalist Tim Page arrived in Saigon, South Vietnam, in 1965. Throughout the conflict Tim kept taking photos in dangerous places as he experienced a lifetime of horrors during his two long visits, including being wounded four times. Later he travelled the world with for Rolling Stones, including countries such as Laos, Cambodia and Bosnia. He was a UN Photographic Peace Ambassador in Afghanistan n 2009.

Tim Page has featured in documentaries , authored nine books and is founder of the Indochina Media Memorial Foundation, which honours the legacy of journalists who died covering wars in that region.

He is Adjunct Professor of Photojournalism at Griffith University, Brisbane, and no longer covers war. 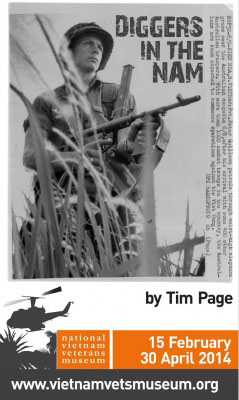 The exhibition was opened by the Hon Greg Hunt MP for Flinders and Minister for the Environment, on Saturday 15 February.

Prints displayed can be purchased through the Museum. Click here for more information…