In 1915, Albert Borella journeyed through 1,000 kilometres of Northern Territory‚Äôs outback from Tennant Creek to Darwin to enlist in World War I. He fought at Gallipoli and the Western Front; was wounded, commissioned on the battlefield, and awarded the Victoria Cross, the highest honour for valour in combat. 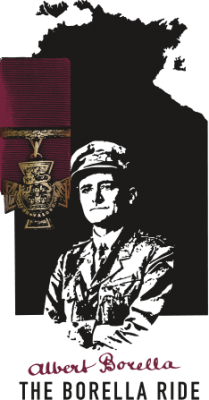 From 20 February to 3 March 2015, The Borella Ride will travel from Tennant Creek to Darwin symbolically retracing Borella‚Äôs trip, which included walking, horse riding, hitching a ride on a horse drawn mail cart and a train ride. Albert Borella‚Äôs grandson, Richard Chalmers-Borella, will be the representative Borella Rider during the journey and he will be joined by three companion Riders.

The Borella Ride will visit towns and communities along the Stuart Highway, with a range of activities planned for each community including a travelling exhibition, community receptions and BBQs, campfire talks, ceremonial and educational activities.