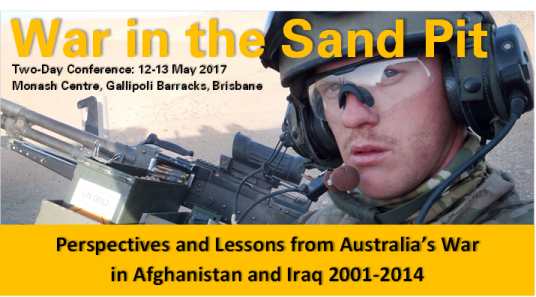 Updates may be found on Twitter at MHHVic #WISP17

In the wake of al-Qaeda‚Äôs attacks on the United States in September 2001 Australia embarked on a military-led campaign in Afghanistan and Iraq.

But few, if any, envisaged it would turn out to be Australia‚Äôs longest war. How did this happen? This conference, drawing on key participants and decision makers, explores how it came about that between 2001 and 2014 over 50,000 members of the Australian Defence Force fought in the Middle East Area of Operations…‚ÄòWar in the Sand Pit‚Äô.

To date, little is known and few works have been written about Australia‚Äôs longest of military conflicts. With the Official History for these wars still some years away it is time to undertake some preliminary analysis of this period in our history. This conference will pose some thought provoking questions and push for some coherent answers.

What happened? How well did we understand the nature of the fight? Why did Australia contribute the way it did? Were there other viable approaches? Did Australia‚Äôs contribution add value to the coalitions? What lessons can be learned for the future? This two-day conference will examine these and other questions.

A select group of key participants and decision makers in the events of that period are gathering together to place into the public record different perspectives and responses to many questions for the benefit of history and scholarship. This nationally significant event is not to be missed.

Military History and Heritage Victoria in partnership with the Strategic and Defence Studies Centre at the ANU have gathered an impressive array of speakers involved first hand at the national, operational and tactical levels.

On other partner agencies, Super-intendent Col Speedie (Retd) (former commander second AFP mission to Afghanistan in 2008/09) and David Savage, AM (former AusAID Stabilisation Advisor, Provincial Reconstruction Team in 2012) will speak on the contribution from other Australian Government agencies.

On lessons and legacies, Professor William Maley (author and editor of Reconstructing Afghanistan) and Lieutenant General Peter Leahy, AC (Retd) (former Chief of the Army 2002-2008) will speak about the lessons and legacies of these wars for Australia. Doctor John Blaxland, whose recently published book The Australian Army from Whitlam to Howard includes chapters on operations in Iraq and Afghanistan, will open and close the conference and edit the proceedings for publication.

The ticket pricing is:

On Friday evening: Drinks and complimentary canapes along with a performance by renowned author, speaker and singer/songwriter, Fred Smith (the first Australian diplomat to be posted to Uruzgan in 2009) at the 2nd Combat Engineer Regiment. The performance will include songs from his album Dust of Uruzgan.

On the registration booking website you have the option of purchasing a ticket for both days of the Conference or just for one day. If you purchase just one day then please make sure you select the right day.

We are also offering coach transfers from Brisbane City to the Gallipoli Barracks Base at $12 per person per trip.

The coaches will depart from Gallipoli Barracks and return to the Adina Anzac Square Hotel at 19:45 on Friday 12 May 2017 and at 17:00 on Saturday 13 May 2017. If you purchase a coach ticket then please ensure that you select the right direction and day.

Entry into Gallipoli Barracks is controlled so all conference delegates will either require a Department of Defence pass or photo ID.

Delegates without one of these forms of identification will not be granted entry into the Base.

If not arriving on the coach , please allow an additional 30 minutes to allow for entry into Gallipoli Barracks.

Cars of non-Defence members will not be permitted into Gallipoli Barracks and there are very limited parking facilities at the front entrance.