This paper is a selection from a larger thesis titled ‘Our guys were very good. We were a very capable battery; in fact we were an arrogant bunch. We were good’, submitted in partial fulfilment of the requirements for the degree of Bachelor of Arts (Honours) University of Wollongong 2014. The thesis purpose was to provide an account of the role played by seven veterans who fought in the Battle for Fire Support Patrol Base (FSPB) Coral, 12 May to 6 June 1968 South Vietnam. Concentrating on 12 and 13 May, the veterans’ memories challenge the account given in On the Offensive: The Australian Army in the Vietnam War 1967-1968,[1] the Official History series devoted to the Vietnam War. The thesis allowed seven veterans the chance to tell the story of FSPB Coral in their own words, to set the record straight as they see it, viz: Captain Donald Tait, Lieutenant Ian Ahearn, Bombardier Laurence D’Arcy, Gunners’ Thomas Carmody, Robert Costello and David Thomas from 102 Field Battery Royal Australian Artillery, and Lieutenant Anthony Jensen, Second-in-Command Mortar Platoon, (1RAR).
This paper provides the soldiers’ voice and offers an insight into what the gunners and mortarmen remember about FSPB Coral. It examines four key point of the battle: intelligence provided to the units, the positioning of the gun batteries, two Final Preventative Fire tasks, and the use of splintex. The soldiers’ memories are at odds with the version put forward in the Official History.

Operation Toan Thang
The Battle for FSPB Coral, occurring between 12 May and 6 June 1968, was part of the largest operation undertaken by the Australian Task Force in Vietnam, Operation Toan Thang, (Complete Victory), yet it remains virtually unknown to most Australians. The establishment of FSPB Coral began with a combined allied military operation in the III Corp area beginning on 8 April 1968. American, South Vietnamese, Australian, New Zealand and Thai troops were involved. Totalling 70,000 service personnel, it was the biggest allied operation of the war to date.[2]
The First Australian Task Force Progression
Australian Major General A.L. MacDonald was approached by American Lieutenant General Weyand, Commander of II Field Force Vietnam, requesting the use of the Australian Task Force to block enemy infiltration routes into Saigon. The area that needed securing was the Bien Hoa/Long Binh complex, situated well north of the relatively secure province of Phuoc Tuy.[3] On 21 April, the move into AO Giles (Figure 1.1) marked the beginning of the Task Force engagement in Toan Thang.[4] 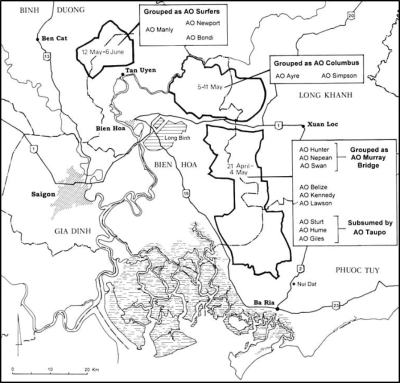 Figure 1.1: The progressive movement of AO’s taken and occupied by the First Australian Task Force during operation Toan Thang, 21 April to 7 June 1968.[5]

With only minor contacts occurring during this phase, the Task Force proceeded north into the Bien Hoa province. From 23 to 25 April, they commenced a multi-battalion reconnaissance-in-force operation.[6] On 5 May, Australian units comprising the First Battalion, Royal Australian Regiment (1RAR) and the Second Battalion, Royal Australian Regiment (2RAR) were airlifted into AO Columbus relieving the United States Army’s 199th Brigade. The Australian Task Force had now established a protective belt east of the Bien Hoa/Long Binh complex. Since 5 May, enemy contact had been minimal, and the second offensive on Saigon faltering, the remaining enemy were considered weak, uncoordinated and to be generally in small disorganised groups.[7]
On 10 May, Weyand held a Commanders’ conference at II Field Force Vietnam Headquarters located at Long Binh, attended by Brigadier Hughes, First Australian Task Force commander. Hughes was informed about moving the Task Force further north into an area known to the Americans as ‘The Catcher’s Mitt’.[8]  On 10 May, 3RAR flew into AO Simpson to relieve 2RAR; 3RAR sighted no enemies on 11 May. For the 21 days of operations, the Task Force had very little to show.[9]
By the time Weyand called his meeting, which as noted earlier, had been attended by Hughes, a second report had been prepared. It stated that the village of Binh My (Figure 1.2), located in AO Surfers, was accessible to enemy troops moving either north or south. The village was well known as an important staging and resupply area for the NVA and Viet Cong units.[10] Although both reports also showed that the enemy forces outnumbered the Australian forces being deployed to the sector, only the first report suggested that this represented a threat to FSPB Coral. 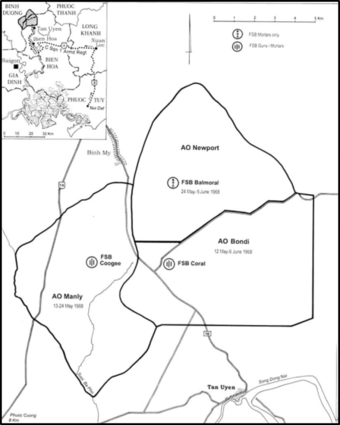 Figure 1.2: AO Surfers included subsidiary AO’s Bondi (FSPB Coral) established 12 May. AO Manly established 13 May and AO Newport established 24 May.[11] Note: AO Newport did not exist in the original orders. It was created when FSPB Balmoral was initiated on 24 May.

Hughes, however, did not pass this information down to the next level in the chain of command, the unit command level. When Lieutenant Colonel Bennett and other unit commanders met at the Task Force Commanders’ ‘orders group’ meeting at the American base, Bearcat, on 10 May, there was no suggestion that there would be a large enemy presence in AO Surfers. The operations would be as they had been over the last three weeks. Contact with the enemy had been limited to small groups of approximately 10 to 20 men, moving to a proposed rendezvous point, avoiding any confrontation.[12] The decision at Bearcat, then, was to establish the base at Coral. With the commanders’ air reconnaissance complete by 5.00pm, Brigadier Hughes initiated the move to AO Surfers for 12 May.[13] With the AO’s established, 3RAR flew into FSPB Coral on 12 May to secure the landing zone, designated K Pad, followed by the remaining elements of 3RAR and 1RAR.[14]

The Soldiers Respond
Intelligence Reports
The Official History states that through intelligence reports, captured documents and prisoners questioned, contact with enemy regiments had occurred in AO Surfers. It states that the Task Force was to interdict enemy withdrawing from the south and southwest. The Commanders’ conference referred to the presence of 7 NVA Division (to which 141 and 165 Regiments belonged) to be somewhere within AO Surfers. The intelligence reports went on to state that ‘this was not considered a significant threat to FSPB Coral’. The Operational Orders noted that the enemy units expecting to pass through AO Surfers would contain a substantial enemy main force and local force units. They would be deployed tactically, be well-coordinated, and possess high morale.[15]
The veterans interviewed state that the intelligence reports and Operational Orders were not passed down to them.
Captain Don Tait remembers the men were expecting an entirely different scenario:
First of all I need to dwell on the intelligence. There is no doubt, absolutely no doubt that we were told from an intelligence point of view that we were going in against a rifle battalion that had been reinforced and we expected to operate against groups of up to 10.[16]
Ian Ahearn is just as emphatic:
This information was not passed on to us, the intelligence provided to all deployed components only indicated enemy withdrawing from Saigon, not reinforcing Saigon. It seems strange, but I never saw the actual orders until about 10 years after the event.[17]

The confusion for 161 Field Battery and 102 Field Battery resulted as no area was allocated for the artillery guns and Murtagh was absent from the area.[26] The area that 161 Field Battery Reconnaissance Party landed at was understood as being the grid reference for the FSPB. With the positioning of 161 Field Battery at the correct location, the remaining elements of the arriving Task Force were to be built around the 161 Field Battery location.[27] When the artillery guns of 161 Field Battery arrived overhead by Chinook helicopters, approximately two hours before they were expected, the 161 Field Battery Reconnaissance Party accepted the guns and set them into position.[28]
The Official History accurately states that 102 Field Battery was located 1500 metres away from 161 Field Battery, leaving Murtagh with a difficult task when it came to defending the base.[29] What the Official History has failed to understand or has failed to correctly acknowledge is why Murtagh who chose to have 102 Field Battery 1500 metres away from 161 Field Battery. It was his decision that put the lives of approximately 100 men in jeopardy when 102 Field Battery and the 1RAR Mortar Platoon were attacked on 13 May 1968.
At K Pad, Ahearn needed to locate Murtagh to be able to establish the gun lay out for 102 Field Battery. Ahearn eventually established radio contact with Murtagh who advised Ahearn that ‘he was up the track’. Ahearn requested Murtagh to throw a smoke grenade to indicate his position, which he did. Ahearn and the 102 Field Battery Reconnaissance Party then headed in Murtagh’s direction.[30] At Murtagh’s location, Ahearn along with the Section Commander and a Battery Surveyor established their exact position which was 1500 metres away from K Pad and 161 Field Battery.[31] At this, Ahearn recalls he commented to Murtagh:
That’s a hell of a long way away for when we [102 Field Battery] get on the ground’, to which he [Murtagh] replied ‘there is a lot of people to fit in here.[32]
When Bravo Company 1RAR flew into FSPB Coral, they did not fly into K Pad, but flew into 102 Field Battery’s new location.  Ahearn was asked by the Forward Observers where they were.[33] Captain Don Tait was the Forward Observer for 1RAR and recalls:
When we touched down at Coral, I had no idea where we were [sic]. I knew it was not the grid reference that we were supposed to be at, and the first thing I did, obviously as a gunner is that I went around and spoke to Scrubber [Ahearn] and said ‘where the hell are we’ and he said ‘we are here’ and I said ‘are you sure of that’. I walked up to the main route and confirmed the track junction and yes we were where Scrubber [Ahearn] said, so that turned out to be right. When I overflew the thing my view was that we should have been further south, but anyway we turned up where we were.[34]