Bombardier Larry D’Arcy of 102 Field Battery No. 3 gun, had not been concerned where the next FSPB was to be located. As a Bombardier, his role began when the guns and men landed on the ground. At approximately 2.25am, 102 Field Battery was called on to provide supporting artillery fire for Delta Company 1RAR and all six guns were involved. At the completion of the fire mission, D’Arcy was busy reorganising the gun ammunition bay when small arms fire started. D’Arcy assumed it was 1RAR firing their weapons. This had happened previously at FSPB Harrison when an Australian Armoured Personnel Carrier had fired their guns without notifying the gun battery in the vicinity.[1]
D’Arcy comments,
When the first few rounds came into Coral I wasn’t really alarmed, just thought it was another balls up [sic]. As soon as I heard the ‘crump’ of the mortars being fired and the RPG’s coming into our position, I soon realised it was no mistake.[2]
D’Arcy made a quick return to his weapons pit to find out what was happening. It was at this point that D’Arcy was ordered to get his M60, move onto the gun bund of No. 5 gun, and told in no uncertain terms to ‘give everything a spray’ as the advancing NVA were attempting to flank the Australians.[3] He still remembers the incredible noise and the intensity of the battle.
The sky was pitch black and the incoming tracer rounds were very clear to see. The noise of the enemy mortars being fired was probably one of the worst feelings. Once you heard the primer go, indicating the mortar had been dropped into the tube, you just waited to hear it coming and hoped it did not land near you or your mates.[4]

They had moved to within grenade throwing distance and started throwing grenades at the Australians.  A grenade landed a few feet from D’Arcy’s position, rolled away and then exploded. The dirt spoil from his shell scrape protected him, but the shrapnel from the exploding grenade damaged the M60 link belt ammunition causing the machine gun to jam.[5]
Unable to clear the stoppage, D’Arcy called to Gunner Costello (Cossie) to pass his rifle. Without hesitation, Costello passed his rifle, and D’Arcy emptied the magazines into the enemy area. Now, having two guns not working, the M60 jammed and the rifle out of bullets, D’Arcy decided on clearing the M60 as it fired the most bullets. Figure 1.9 shows Bombardier Larry D’Arcy from No. 3 gun on the morning of 13 May and what is often described as the ‘1000 yard stare’.

Figure 1.9: Bombardier D’Arcy on the morning of 13 May showing the strain of combat. Behind is the M60 that suffered the stoppage. In his left hand (circled) is the damaged link ammunition. At right are those damaged rounds caused by exploding grenade fragments.[6]

Gunner Tom Carmody of 102 Field Battery No. 3 gun like the other gunners did not know what was planned for FSPB Coral; the gunners were not privy to such information.[7] Carmody was standing to, awaiting fire orders as the infantry reported a contact when the enemy attacked.
I recall a green glow in front of me and thought that the fireflies were bright tonight and next minute, whoosh whoosh a series of RPG’s flew overhead, then the mortars started coming in. All hell broke loose. I thought this couldn’t be happening to me.[8]

A fire mission was called which No. 3 gun conducted with a limited crew, and then the gunners ran ammunition up to No. 4 gun. Carmody was sent to the helipad to break open an ammunition crate. Approaching the helipad, fellow gunner Ross Prowse, in the light of the flares, was attempting to open the ammunition crate with an axe. As Tom emerged out of the dark, Prowse whipped around and was about to put the axe through Carmody’s head: ‘I swore at him and said ‘‘don’t do that’’, words to that effect’.[9]
Gunner David Thomas (Tomo) of 102 Field Battery No. 3 gun recalls that it was sometime through the night when all the whiz bangs started. Gunner Thomas was under his hootchie when the bombardment came. ‘I thought it was just a few rounds, I didn’t think it was going to turn out like it did’.[10]
Thomas recalls that a fire mission was called to support 3RAR as they were in a contact with the enemy. No. 3 gun executed the fire mission with only three men available on the gun: Gun Sergeant Elgar (Algie), Gunner Costello (Cossie) and himself. Bombardier D’Arcy was firing the M60 on one of the gun bunds and Gunner Carmody was in another area. The fire mission went on while rockets and bullets were going through the gun position; this was all in the dark of night.[11] It was at this moment of the interview that Gunner Thomas recalls a poignant moment that has remained with him since it occurred on 13 May 1968.
I will never forget carrying splintex over to No 4 gun, Stevos gun and I tripped and fell down and had a poncho wrapped around my ankles. You know, I looked down and there was Bluey Sawtell, he was dead, he had been shot in the head and was under the poncho near our gun bay. I covered him back up and kept going.[12]

Gunner Robert Costello (Cossie) of 102 Field Battery No. 3 gun had been waiting with the other gunners at FSPB Harrison since daybreak to be flown into FSPB Coral. Landing at FSPB Coral late in the afternoon, the gunners established the gun positions, but were unable to prepare defences due to inadequate stores being delivered. Weapons pits were not completed and at this stage Costello had only half prepared his weapons pit by the time ‘Stand To’ was called.[13]
Very early in the morning all hell broke loose as rockets were going above the heads of the gunners about six to eight feet and mortars were exploding around them. The artillery guns were firing over the protective dirt bund at the enemy running across their front.[14] The interview with Costello reveals more than just his memory of the battle. Costello reflected on the importance of mateship and the camaraderie that is built with the men he served alongside.
I may be biased in my thoughts here, but our group, not only as a unit, but you could call Charlie Gun (No. 3), the immediate family if you like. I’m very biased towards Charlie gun as I have always thought that our mateship and comradeship is something that could never be broken. In my eyes, it’s a true relation to what mateship really is. I’m sure every gunner feels the same way about their guns.[15] 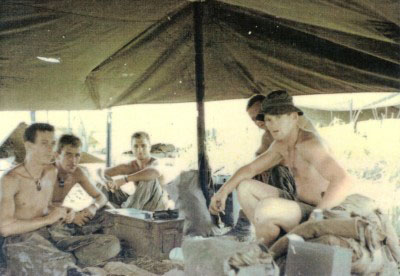 Figure 1.10: Left to right, No. 3 (Charlie Gun), ‘Pommy’ Fisher, Costello, D’Arcy, Thomas (obscured) and ‘Stoney’ Bourke sitting under there shelter on 13 May after a tough night of fighting. Note: The holes in the tent (circled) are from exploding shrapnel, rockets and bullets.[16]

As morning approached, incoming rounds were still falling around FSPB Coral, and the NVA were still firing sporadically at the Australian positions. Ahearn instructed Second Lieutenant Lowry to take a clearing patrol and head out through No. 6 gun. At the same time Ahearn would take the medical officer and others and head through the 1RAR Mortar Platoon. This was to do two things: clear the area of any enemy and to check the situation of 1RAR Mortars.[17]
Ahearn recalls.
The first one we came across was a wounded NVA and I distinctly remember that he had been hit with a burst on F1 9mm (sub machine gun ammunition) and you could see the rounds in his chest as it was just getting light. It was 1944 ammunition so it had only just gone in, he wasn’t feeling great, but he wasn’t anywhere near dead [sic]. He was the first we came across.[18]

Ordered to take a clearing patrol out through the gun position, Bombardier D’Arcy gathered Bombardier Burns (Burnsie), Gunner Floyd and a few others before cautiously moving out to begin a clearing search. The gunners had not moved far from the gun position when Gunner Ayson opened fire and shot an NVA in the grass. On instinct, the men went to ground. D’Arcy was now looking at an NVA soldier and the end of his AK47. D’Arcy pulled the trigger of his M60; the sound was a resonating thud as his M60 jammed.[19]
All I remember was Ayson firing; I hit the ground as trained to do and seeing the barrel of an enemy gun I pulled the trigger and nothing happened. I was yelling at Burnsie to bloody shoot him, just bloody shoot him [sic]. I did this more than once. Burnsie assured me that he was already dead and I can get up and stop shouting.[20]

As a result of that first night’s contact, the Australians suffered nine soldiers killed in action and 28 wounded. The biggest loss was with 1RAR Mortar Platoon. With 18 men flying into FSPB Coral, they suffered five men killed in action and eight wounded. Of the men in 1RAR Mortar Platoon who were in the battle, only Lieutenant Jensen and signaler Private Parr remained at FSPB Coral. All the other men were injured or suffered from battle shock and were returned to Nui Dat. The enemy dead numbered 52 on the battlefield around FSPB Coral.[21]
The attack on 12 and 13 May demonstrated the attacking capabilities of the enemy. The idea now was to strengthen the defences at FSPB Coral, providing the enemy with some big targets. FSPB Coral would be heavily defended at night and aggressive daytime patrols would ensure that the fight was taken to the enemy. Major John Keldie, commanding the Armoured Personnel Carriers now became the local defence Commander.[22]  He was to co-ordinate the defence of FSPB Coral, a role previously held so inadequately by Murtagh.
The second attack on FSPB Coral occurred on 16 May at approximately 2.30am. Once again the enemy hit under the cover of darkness, launching a sustained barrage of rockets, mortars and small arms on FSPB Coral.[23] The fight for FSPB Coral went on until 6 June and involved a large number of clashes with NVA and heavy rocketing and mortaring of Coral.[24]
In early June, the First Australian Task Force was informed that operations in the ‘Catchers Mitt’ area were terminated. On 6 June FSPB Coral was abandoned and remaining units returned to Nui Dat via air or road.[25] By the time the Australians withdrew, over 270 NVA had been killed, 20 captured and an untold number wounded. The Australians suffered 25 killed and 109 wounded.[26]
Lieutenant Ian Ahearn from 102 Field Battery wrote 13 citations for actions at FSPB Coral. Of those 13 written, two gunners were decorated for their part in the battle: Sergeant Leslie John Stephens received the Military Medal (MM) and Sergeant Lindsay Arthur (Algie) Elgar was Mention in Despatches (MiD).[27] Events that occurred over 45 years ago still resonate in the minds of the veterans and recognition of their action in the battle of FSPB Coral are still being sought. Yet, the veterans wonder how, or even if, the Battle for FSPB Coral will be remembered.