From the Boer War to Vietnam and beyond, Australians have long relied on war correspondents to bring home reports from the front lines of conflict. This session delivered on June 8, 2016 at the Pompey Elliot RSL as part of the MHHV’s monthly speaker program gave a lively round up of some of Victoria’s most colourful war correspondents. 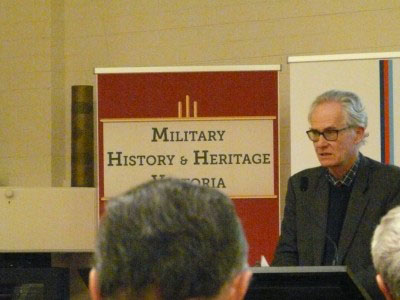 Dr Richard Trembath began by introducing Australia’s earliest war correspondents, Howard Willoughby and William Lambie, two characters that virtually invented the Australian profession well before Federation. Willoughby covered the 3rd Maori Wars in Taranaki NZ 1863-64 for the Argus. He had incredible latitude in his commentaries and his criticism of the English commanders was fierce as his praise of the Maori was complementary. Trembath mused that perhaps this was coloured somewhat by his admiration of Maori women. Back in Australia Willoughby forged a successful career ending as editor of the Argus.
William Lambie exemplified the war correspondent as celebrity and hero. He had the distinction of being twice wounded, the second fatally. He received his first wound as he covered the 1885 Sudan War. During the Boer War he and another journalist were surrounded by 40 Boers. The pair of correspondents galloped off and Lambie was shot dead. News of gallant death spread all around the world. He has the sad distinction of being the first Australian journalist killed while covering a war. 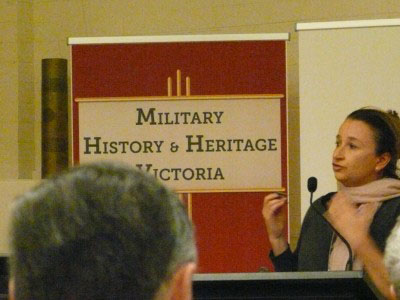 Associate Professor Fay Anderson introduced the audience to five characters. Phillip Schuler, was the son of the Age editor. While not officially accredited he was allowed to go with the AIF to Gallipoli and Europe. A contemporary of Charles Bean he took thousands of photographs of the everyday aspects of war. Because these photographs weren’t officially sanctioned, they form a valuable unvarnished record of what it was like for a digger during war. Obviously concerned that as a he correspondent wasn’t doing enough, he joined up in 1916 and subsequently died from wounds received during the Battle of Messines June 1917.
Keith Murdock with his Gallipoli Letter not only reported war but changed history and later gave birth to the man who built a media empire.
Moving forward to WW2, photographer Damien Parer was appointed official movie photographer to the AIF. He covered the sinking of the Sydney, and worked in Greece, Crete and Syria. His pictures in New Guinea along the Kokoda Track and elsewhere are iconic. Sequences he filmed were included in Kokoda Front Line! and won its producer, Ken G. Hall, an Academy Award for documentary film-making. He was killed by Japanese gunfire in 1944 while filming the US Marine invasion of Palau.
Chester Wilmot represents the lone wolf correspondent that said exactly what was on his mind and to hell with the consequences. After crossing Blamey one too many times in 1942 he was banned from all AIF areas of operations. The BBC picked him up and loved his style as he covered British operations. He was killed in a plane crash in 1954.
Professor Anderson discussed two less well-known correspondents from WW2 who deserve our attention, Godfrey Blunden covered 12 fronts and alerted Australia to the Holocaust. After the war he married a French woman, had a distinguished career with Time-Life in New York and went on to be a fiction writer. He never returned to Australia. Sam White, a quixotic fellow traveller was born in the Ukraine and brought up in Melbourne. An avowed communist he had an ASIO file inches thick. He made his name covering the Normandy Landings and the Liberation of Paris. A heavy drinking larger than life ‘Hemingwayesque figure’ with a reputation for being a ‘pants man’ he married a French woman and carved out a post war career in Paris. 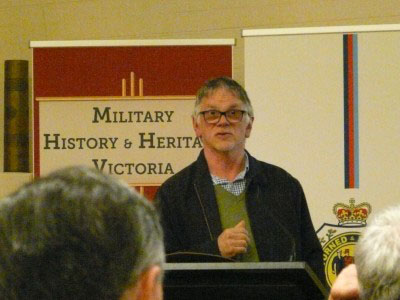 Garrie Hutchinson introduced the audience to Alan Moorehead and George Johnston. Moorhead was born in Melbourne with a BA from Melbourne University was already a well established correspondent in London for the Daily Express when war broke out. He won an international reputation for his coverage of campaigns in the Middle East and Asia, the Mediterranean and Northwest Europe, was twice mentioned in dispatches and was awarded the OBE. He was close to Montgomery in North Africa and wrote insightfully from the front line. His subsequent writing was world renowned.
George Johnston started working life as a lithographer and later promoted to journalist for the Argus. During the war he was accredited No.1 Australian war correspondent. He worked in New Guinea, Britain, USA, India, China, Burma and Italy. Following the war he published several books. Considered ‘golden boy’ by the Argus’s MD he was made editor of the Australian Posts. He married Charmian Clift a fellow journalist and writer and for a time both had local fame. Hungering to make it overseas Johnston took up a senior position in London. Their literary aspirations collided with their business commitments causing too much strain and they threw in the city life to live on a Greek Island. There they had visitors such as painter Sydney Nolan and poet Leonard Cohen. Success eluded them until he wrote the hugely successful autobiographical novel My Brother Jack.
The presenters
Dr Richard Trembath is a lecturer in history at Melbourne University. He has taught many university courses in a number of disciplines ranging from philosophy to military history. He is the co-author of several books, including Witnesses to War with Fay Anderson, a landmark chronicle of Australia’s war correspondents. Much of his work involves interviews and oral history.
Associate Professor Fay Anderson is a media historian in the School of Media, Film and Journalism at Monash University. She has published widely on war, journalism, oral history, the military, biography, genocide, and memory. Witnesses to War: The History of Australian Conflict Reporting was co-authored by Fay and Richard Trembath and published in 2011. Fay’s and Sally Young’s co-authored book, Shooting the Picture: A History of Australian Press Photography, will be published in August 2016 by MUP.
Garrie Hutchinson has written or edited more than 30 books including Eyewitness: Australians write from the Front-line, Pilgrimage: A Traveller’s Guide to Australia’s Battlefields, Pilgrimage: A Traveller’s Guide to New Zealanders in Two World Wars, An Australian Odyssey: From Giza to Gallipoli and Not Going to Vietnam: Journeys through Two Wars. He is currently a Research Fellow at the University of Melbourne and also completing a PhD on those who sailed to the First World War on the flagship of the first convoy, the Orvieto. 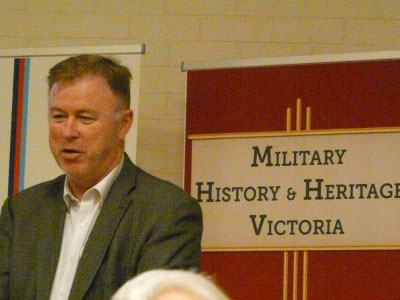