Hero or Deserter? Gordon Bennett and the Tragic Defeat of the 8th Division By Roger Maynard – Book Review

After re-reading earlier this year Rohan Rivett’s 1946 edition of ‘Behind Bamboo’ with his vivid account of his own escape from Singapore, his recapture in Java and his three years as a POW in Burma, I was really looking forward to the publication of Roger Maynard’s new book on General Gordon Bennett.
Most military historians will have good knowledge of the fall of Singapore however the details of the ‘escape’ from Singapore of Bennett is not so well documented. Roger’s book fills in all the gaps. It covers Bennett’s early military career in the First World War and his outstanding success and promotion. After this five year conflict he was Australia’s youngest General aged only 32. Stepping out of the military after WWI he returned to work as an accountant yet he remained a citizen-soldier and led the 2nd Australian Division in 1926. 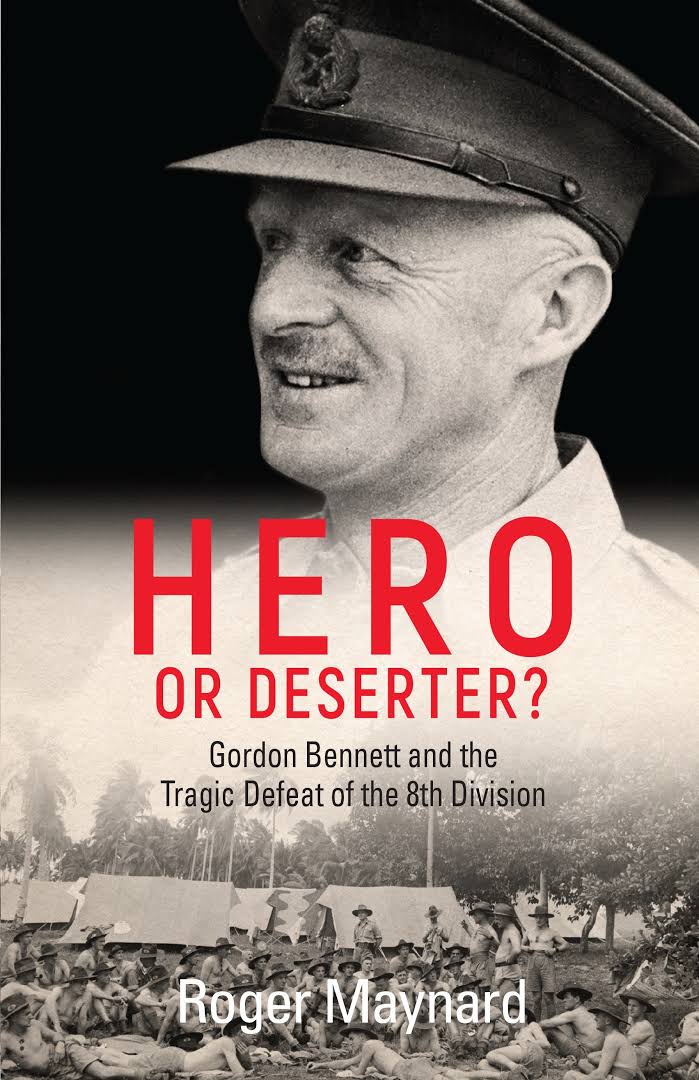 As a citizen-soldier his public comments and articles on the military were not taken too kindly by the regular Army senior staff and he was very much out of favour with the Army’s key senior decision makers at the outbreak of WWII. Even so at the outbreak of WWII at the age of 52 and the second highest ranked citizen officer in Australia he still had immense kudos based on his outstanding service in WWI and believed he had a lot to offer.
His aggressive attitude and public criticism of his military superiors left him floundering for an appointment in 1939 and it was only by chance that after his most vocal critic General Sir Cyril White the Chief of the General staff was killed in a plane crash on the 13 August 1940 that Bennett was given General Sturdee’s 8th Division when Sturdee was promotion to Chief of the General Staff, replacing General White.
In addition to White’s opposition to promotion or Divisional appointment other senior officers, most importantly General Thomas Blamey who had little respect for Bennett, was playing a spoiling role behind the scenes and as history shows had a major part in destroying Bennett’s character in subsequent enquiries and the Royal Commission set up to review Bennett’s escape and potential desertion of his post.
Roger’s book covers in good detail the Malaysian campaign and the 8th Division’s role including some basic maps along, with some very good insights surrounding the ultimate surrender to the Japanese. Bennett’s relationships with Generals Percival and Wavell as well as his own senior officers is well documented and give a great insight into the very chaotic situation during the 48 hours prior to the actual surrender to the Japanese.
Bennett’s actual escape from Singapore with several of his senior offices is well covered and includes several interviews with actual participants which makes for very interesting reading.
The last third of the books covers Bennett’s ongoing defence of his position and the legal position of when a POW can legitimately escape. A closed Army enquiry found him guilty of deserting his post and a subsequent Royal Commission came to the same conclusion based on some very loose legal interpretations. He never accepted these rulings and spent the rest of his life defending his position and right to escape after the surrender to the Japanese had been declared.
Interestingly, the men of the 8th Division, but not the officers, held Bennett in high regard and fully endorsed his escape. The most interesting aspect that the book fully explores is the degree of personal animosity and egos within the highest ranks of the Australian Army, including General Thomas Blamey.
This book is a good read and fully covers the subject. There are a number of excellent private photos supplied by Bennett’s family and also many direct interviews with a number of still living members of the 8th Division.
I recommend this book to all Military historians interested in this theatre of WWII, Bennett and the 8th Division, and the fall of Singapore.