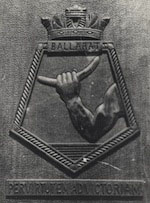 After trials in the Melbourne area Ballarat (I) sailed for Sydney on 20 September 1941. After arrival three days later the ship joined the 20th Minesweeping Flotilla, based in Sydney. On 1 November 1941 Ballarat (I) sailed for Jervis Bay to give anti-submarine protection to the transport Queen Mary. That ship and another giant liner of the Cunard Line, Queen Elizabeth, were to comprise Convoy US13 to the Middle East, the troops embarked being mainly from the 6th, 7th and 9th Australian Divisions. After embarkation of troops at Sydney the transports proceeded to Jervis Bay, whence they sailed for the Middle East on 3 November. Ballarat (I) returned to Sydney the same day.

On 14 November 1941, Ballarat (I) departed Sydney towing Oil Lighter No 1. The vessels proceeded via Brisbane, Townsville and Thursday Island to Darwin, where they arrived on 8 December. Two days later Ballarat (I) commenced escort duty between Darwin, Timor and Ambon. She saw action early in her career, arriving at Batavia early in January 1942. She then proceeded to Singapore. After leaving Singapore on 3 February 1942 she carried out patrols in Banka Strait (‘Bomb Alley’), and was employed also in rescuing shipwrecked crews and carrying out demolition work.

Ballarat (I) carried out one of the largest rescue operations, picking up 215 survivors from the MV Derrymore, sixty miles north west of Batavia on 14 February 1942. The Derrymore had been sunk by Japanese submarine in position 5°18´S, 106°20´E. Amongst those rescued by Ballarat (I) was FLGOFF J.G. RAAF, who was later to become Prime Minister of Australia. Amongst other ministerial posts held by Mr Gorton before he became Prime Minister was that of Minister for the Navy.

She landed parties at Oosthaven for demolition, which was successfully carried out without loss. With sister ships, Ballarat (I) took a prominent part in the evacuation of Sumatra, operating from Palembang. She was the last RAN ship to leave, staying behind to sink a small unseaworthy minesweeper.

The ship then returned to Australia and was employed on convoy escort work, mainly to New Guinea. In November she and her sister ship HMAS Katoomba (I) were heavily attacked by Japanese divebombers.

In December 1942 Ballarat (I) and her sister ships Broome (I) and Colac were detailed to transport Australian troops and land them as far forward as possible in the Buna area. The three vessels reached the landing point at Cape Sudest near Oro Bay without incident, but a few minutes later unidentified aircraft began dropping flares. Because of the threat of attack from enemy aircraft and from enemy warships believed to be in the area it was decided to retire temporarily after only 46 men had disembarked out of a total of 762. Later the same day (14 December) the operation was successfully completed using a new landing position and under cover of darkness all troops were put safely ashore. During the remainder of the month Ballarat (I) was involved in troop carrying on three further occasions.

In April 1943 Ballarat (I) was ordered to operate off the Australian east coast to counter the Japanese submarine menace.

Returning north for escort duty to New Guinea in January 1944 Ballarat (I) was later employed between Thursday Island and Darwin. In August 1944 she ferried troops from Eilanden River (southern Dutch New Guinea) bringing them without loss to Merauke. In 1945 she was minesweeping off Sydney prior to the arrival of the British Pacific Fleet, departing for Manus on 25 February and arriving at Leyte Gulf on 26 March. Ballarat (I) then participated in the operation for the capture of Okinawa (March-May 1945).

Ballarat (I) took part in the surrender ceremony at Tokyo, after which she was engaged in minesweeping in the Hong Kong area with the 20th and 21st Minesweeping Flotillas. She was damaged by a mine at Amoy on 6 November, and returned to Melbourne on 13 December where the ship’s company went on long leave. At the conclusion of hostilities Ballarat (I) had steamed 130,000 miles.

The ship paid off into Reserve at Sydney on 27 September 1946 and was sold to a Hong Kong shipping company, China Traders Ltd., on 10 July 1947.

Ballarat (I) did not leave Australian waters and in December 1950 she was resold to the Ta Hing Company (Hong Kong) Ltd. She was subsequently refitted for the Chinese coastal trade and renamed Carmencita. In January 1951, however, the Commonwealth Government issued a Statutory Order banning her from proceeding to Chinese waters. In 1953 she was again sold, on this occasion to John Manners and Co (Aust) Pty Ltd, Sydney. It has been reported that the ship was broken up in 1953.

HMAS Ballarat had steamed over 130,000 miles during her 5 year commission.

These Minesweepers served in WW2 throughout all the oceans of the world, and steamed an incredible 5ix million miles, an incredible total indeed.