In Good Hands: The Life of Dr Sam Stening, POW

‘You know I am not brave, and I’m still not brave’, wrote Dr Sam Stening to his wife Olivia from a Japanese prison camp, referring to the beatings he received while trying to protect his sick men day after day, for over three years.

In Good Hands tells the remarkable story of Sam Stening – Royal Australian Navy doctor – who, as a prisoner of the Japanese, saved the lives of countless Allied servicemen.  Blown from the sinking HMAS Perth at the height of the March 1942 Battle of Sunda Strait, Sam spent more than three years caring for fellow POWs, improvising and stretching limited medical supplies in the harshest of conditions as a prisoner in several camps in Japan. 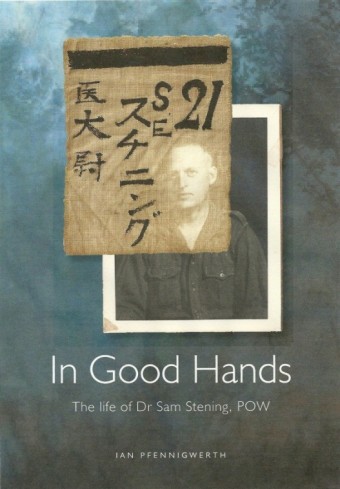 Sam’s story is also a true romance.  In his darkest hours, Sam drew strength from memories of his glamorous wife Olivia.  Her unstinting support helped re-establish his post-war career and steady rise to the top of his profession. Working mainly in the Crown Street Women’s Hospital and the Royal Alexandra Hospital for Children, Sam was among a group of leading practitioners who established paediatrics as a valued specialisation in New South Wales.

In Good Hands will be launched by Her Excellency the Governor of New South Wales, Professor Marie Bashir, on 24 February 2012 following the ceremony commemorating the Battle of the Java Sea – at 12 noon in the Occidental Hotel in York Street, Sydney

Dr Ian Pfennigwerth served 35 years in the Royal Australian Navy in postings which included command of the successor to Stening’s ship, the guided missile destroyer HMAS Perth.  He was also Defence Attaché in Beijing following the Tiananmen Square protests. Awarded a PhD in 2005, he has written and published extensively on naval history. In Good Hands is his sixth book.

In Good Hands: The Life of Dr Sam Stening, POW is published by Longueville Publishing and will be available on line from 20 February 2012.
He will be also be a presenter at the MHHV Conference In the Shadow of War – Australia 1942 to be held in Melbourne over 21-22 April 2012.