Lieutenant General Mark Evans AO, DSC (Rtd) will open the Military History and Heritage Victoria 2012 Conference In the Shadow of War – Australia 1942, to be held in Melbourne over 21-22 April 2012.
Military History and Heritage Victoria president Colonel Marcus Fielding said that conference delegates will hear from a military leader with a distinguished career and who recently commanded the operations involving all Australian forces deployed around the world. 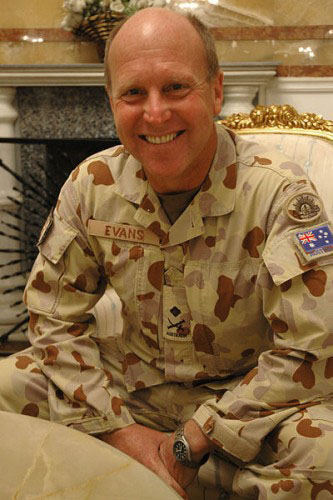 “Lieutenant General Mark Evans was the Chief of Joint Operations between 2008 and 2010. His long military career and numerous operational deployments has given him many unique experiences and has allowed him to develop a deep appreciation for the situation facing Australian forces in 1942”, said Colonel Fielding.

Lieutenant General Evans said, “Any good soldier is acutely aware of the need to study military history. We need to understand the importance of the influence of the character of key commanders on the play of events, identify the key principles that are enduring and that underpin military operations, and hopefully learn from the successes and failures that precede us. Beyond the operational application of lessons learnt from our military history our history will always be an important component of our national identity.”

The Military History and Heritage Victoria military history conference will bring together some of Australia’s most eminent military historians to discuss the challenges and controversies of those dark days when Australia faced the threat of a possible invasion, as well as investigate the political and home front aspects of 1942.  Guest speakers from Japan’s National Defence Institute and from the USA will complement speakers from the Australian War Memorial, veterans and Australia’s leading research universities.

Lieutenant General Evans is available for interviews.  Please arrange through the MHHV publicity officer, Peter Kemp, who can be reached through info@mhhv.org.au or on 0427 859 549

Conference details, including the full programme, can be found at www.mhhv.org.au

Biographical detail and image for Lieutenant General Evans can be found at http://en.wikipedia.org/wiki/Mark_Evans_(general)