We have a reasonably good idea who the first men to land on the Gallipoli Peninsula on the 25th April 1915 were. They were Queenslanders, part of the 9th Battalion, in one of the landing craft that came ashore in the predawn darkness at 4.21am.  Who the first Queenslander to step foot ashore is not known, but time and the excitement of the moment have made it impossible to determine accurately.

At the other end of the campaign, however, there is no dispute about who was the last allied soldier to leave the Gallipoli Peninsula.  It was Joe Maude, the Sandhurst nickname of, Lieutenant General Sir Frederick Stanley Maude.  But how the ‘honor’ of being the last soldier to evacuate the Peninsula came about is a bit of a mystery.

Maude was a career soldier who was born in 1864 in Gibraltar, the son of another very famous General and VC winner Sir Frederick Francis Maude.  After attending the Hawtrey Preparatory School in Slough from 1875 he went on to Eton.  At age eighteen he entered Sandhurst and after brilliant academic results graduated in 1884 and was appointed to the Coldstream Guards.  He looked the part; he was six foot three, well-built and handsome. 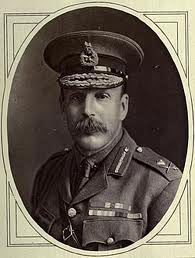 His first active service as a subaltern was in the Sudan in 1885. He was present at the Battle of Hasheen and received the Sudan medal and  the Star of Khedive.  He took an active part in the South African war from 1889 to 1901 where he again won acclaim being mentioned in  despatches several times, and receiving the Queens medal with six clasps along with a DSO.

After being wounded in the South African war in his right arm he was no longer able to salute in the orthodox manner. By the end of the  South African War Maude was a Lieutenant Colonel and spent the next fourteen years prior to the First World War in a number of staff  positions and as Military Secretary to Lord Minto in Canada. In 1911 he was promoted to full Colonel.

Maude’s First World War service began on the staff of General Pulteney’s 111th Corps in France.  In October 1914 he was promoted to  Brigadier General and given the command of the 14th Brigade.  After being badly wounded in April 1915 Maude was promoted to Major  General and given command of the 33rd Division; a new division training in England.  In mid-August 1915 Maude was ordered to report to  General Sir Ian Hamilton’s HQ on the Gallipoli Peninsula. On interviewing Maude in late August 1915 Hamilton recorded that he “is  straining at the leash to have a cut at the Turks.”

Maude was a firm supporter of the Dardanelles campaign and was firmly convinced that if Hamilton could only get the depleted ranks filled  and more ammunition that Hamilton’s forces could drive the Turks back far enough to let the British Fleet through.  Maude was convinced  that even a holding position would bleed the Ottoman Empire to death.

Maude was assigned to take over the shattered 13th Division at Anzac Cove in early September 1915. Several battalions of the 13th Division including the 7th Gloucester’s and the 8th Royal Welsh Fusiliers had been sent to support the Wellington Battalion of the NZ Infantry Brigade with the capture of Hill ‘Q’ on 9th August 1915.  This attack was a costly disaster with over 3,000 British and New Zealand troops killed and wounded.  By September 1915 the 13th Division had suffered over 6,000 casualties from an original strength of 10,500.  The morale and readiness of the Division was poor and Maude’s major challenge was to inspire and motivate the remaining troops.  In early October 1915 the remnants of the 13th Division were moved from Anzac Cove to Suvla Bay as a reserve division.

Maude’s next major task was to evacuate the 13th Division from Suvla Bay and to reinforce the British forces at Cape Helles.  Maude the methodical commander did this faultlessly and it is claimed he left less than 200 pounds of usable equipment for the Turks, even ripping the sand bags on the parapets with bayonet to render them useless.  No sooner had the 13th Division arrived at ‘W’ Beach on Cape Helles, however, than the decision was made to evacuate the entire Gallipoli Peninsula.

The decision to abandon the Gallipoli campaign was taken in November 1915.  When the decision was taken to abandon the Dardanelles, Maude was very much distressed and believed a fatal mistake had been made and that a great prolongation of the war must ensue.  He could foresee the freeing up of large bodies of Turkish troops which would move against the British in Mesopotamia and against the Russians in the Caucasus.

So we now have Maude at Cape Helles and the mystery of why and how he came to be the last allied soldier to step off the Gallipoli Peninsula.  Maude was of the old school with impeccable manners and punctuality, somehow got lost on the day of the final British evacuation.  He was absolutely time driven and committed.  His day was planned to the minute from rising at 5.00am to going to bed at precisely at 9.30pm regardless of the situation.  His meal breaks were limited to 15 minutes and he maintained a bank of orderlies on shift to action his requirements. He was never late.

The Anzacs were the first to evacuate the Peninsula.  The last Australian rear-guard unit pulled out of their position on 19/20th December 1915.  The Anzac evacuation was executed with perfect military precision and 35,445 Anzac’s were taken off Anzac Cove beach with only one casualty, a man wounded by a stray shot.  It was a sad day for these 35,445 remaining Anzacs who had to leave 7,594 of their Australian mates and 2,431 of their New Zealand mates behind, buried in Ottoman soil.

Maude had planned to embark the 13th Division from Gully Beach on Cape Helles on 8th January 1916.  General Lawrence commanded the rear-guard and was scheduled to embark from ‘W’ beach the following day.  The evacuation of the 13th Division commenced at 5.30pm and the last detachments holding the trenches were on Gully Beach and ready to go by 1.15am on 9th January 1915.  At 2.30am Maude was informed that due to a sudden storm there would be insufficient transport boats coming to Gully Beach to take off the remaining group.  Maude, together with his HQ staff and the remaining pickets, decided to trek the two miles to the final evacuation point on W Beach.  Maude, with his usual professionalism kept the group cool and steady.

Maude was carrying a large valise of kit and got caught up in barbed wire entanglements and trenches. Luckily, the Turks knew the British were leaving and the Turks were not aggressively interfering with the withdrawal.

The last boat at W Beach waited for Maude for over an hour after the planned departure time. It was just about to leave without him when he stumbled out from the scrub still with his valise. He was pulled aboard as the Navy ratings dipped their oars into the Cape Helles waters for the last time.

Maude was the last Allied soldier to step off the Gallipoli Peninsula in the early morning of 9th January 1916.  General Sir Ian Hamilton wrote a few months later in a personal letter to Amy Menzies that “Maude was the last man off on the whole Peninsula.”

He became a Gallipoli legend for this exploit and even had a verse written by one of his senior colleagues, using the pen name Lorenzo.  This amusing verse was written as a parody on “Come into the Garden, Maud” where the troops are supposed to be bewailing his reluctance to leave enemy soil.

Found on Helles on January 9th

For the fuse has long been lit,

And never mind your kit,

The news that your march is  o’er.

The sea runs high, but what care I,

It’s better to be sick than blown sky high,

So jump into the lighter, Maude,

The allotted time is flown,

I’m off in the launch alone,

I’m off in the lighter a-lone.