Ronald ‘Buck’ Taylor was born in the Melbourne suburb of Carlton on 29 April 1918, the fourth of ten children (six boys and four girls) born to Elsie Taylor (Nee Davey) and George Taylor an Iron Worker from Collingwood.  As a child he lived in the suburb of Carlton until his family moved to Port Melbourne when he was seven.  Ron was a typical boy of the era, playing cricket and Australian Rules Football with his brothers and friends in the paddocks near his home, riding billy carts and fishing from the piers in Port Melbourne.
It was while living in Port Melbourne that Ron’s interest in the Navy began.  He would often watch the warships entering port and also talk to the Naval Guards at the Lonsdale Depot about life in the Navy.  At age seven he became the mascot of the sloop HMAS Marguerite, based in Melbourne, and was given his own uniform which he wore on special occasions.
In 1930, at the height of the Depression, the Taylor family was dealt a savage blow when George Taylor abandoned his wife and ten children, whose ages ranged from 18 to only nine months.   As a result the family was split up.  The two eldest boys (Leonard and Wallace) went to Queensland to work on a sugarcane plantation. Jean, the oldest girl, went to work on a farm in rural Victoria.  Ron and his brother Ray stayed at home but the five youngest children were placed in institutions to be cared for.
Ron was educated at the local Port Melbourne school. However, after completing the eighth grade when he was aged 14, he was forced to leave school and take up work as a casual labourer.   In 1935 he decided to fulfil his boyhood dreams of being a sailor and he applied to join the Royal Australian Navy.  On 12 June 1935 the 17-year-old Ron Taylor joined the Navy as an Ordinary Seaman 2nd Class, signing on for 12 years service, which would not actually start until he turned 18.   Taylor was described on entry to the Navy as 5 foot 6 inches tall, with dark brown hair, brown eyes, a fresh complexion and a scar on his left heel (a legacy of a billy cart accident as a boy). 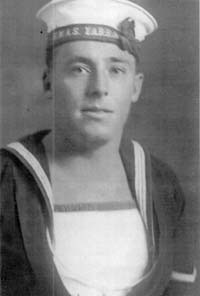 Taylor commenced his training at Flinders Naval Depot (HMAS Cerberus) to become a Seaman.  In April 1936 he joined his first ship, the cruiser HMAS Australia, which
he served in until April 1938.  During his time onboard the ship saw service overseas in the Mediterranean and in Australian, New Guinea and New Zealand waters.   He then undertook a five-month course in gunnery at Cerberus, before spending a month in the destroyer HMAS Vampire and five months in the depot ship HMAS Penguin.  In March 1939 he joined the cruiser HMAS Adelaide which he served in until posted to the sloop HMAS Yarra in August 1939, shortly before World War II broke out.
Yarra remained in Australian waters until July 1940 when she was dispatched to operate in the Red Sea and Persian Gulf.  In May 1941, Yarra was involved in the successful Allied takeover of Iran during which time Taylor, now a Leading Seaman, commanded one of  Yarra’s four inch guns in actions against the Iranian Navy.
In late 1941 Yarra served briefly in the Mediterranean carrying supplies and troops into the besieged Allied garrison at Tobruk.  Enemy aircraft attacked the ship on each trip into Tobruk  and Taylor’s gun was active in beating off these enemy attacks.
Following the Japanese attack on Pearl Harbour, Yarra was ordered to sail for South East Asian waters to help stem the tide of the Japanese advance.  In January and February 1942 Yarra took part in convoy escort duties between the Sunda Strait (between Java and Sumatra) and Singapore.  The ship was frequently attacked by Japanese aircraft and Ron Taylor’s gun was again heavily involved in defending the ship.  He was described by his Commanding Officer as controlling his gun crew ‘with judgement and determination’ and that his ‘keenness and courage are a good example to all those in his vicinity’.
Following the fall of Singapore Yarra was ordered to escort a convoy of three ships from Tjilatjap, in southern Java, to Fremantle.  The convoy left Java on 2 March 1942 for the six-day journey to Fremantle.  On 4 March the convoy was intercepted by a force of three Japanese cruisers and two destroyers, and despite a gallant attempt by Yarra to protect the convoy all four ships were sunk with heavy loss of life.  HMAS Yarra was the last ship to be sunk.  Ron Taylor ignored the order to abandon ship, choosing to stay at his gun alone and still firing, slowly and defiantly, at the enemy until he was killed shortly before the ship went down.
Two of Ron Taylor’s brothers (Lawrence and Raymond) also served in the Navy during the war.   When Elsie Taylor died, in 1963, they were instrumental in organising for her ashes to be scattered at sea off Java to join the remains of her son.
In 2011 the Australian Government announced a review of Honours and Awards for several naval personnel.  Amongst those to be considered are the commander of HMAS Yarra, Lieutenant Commander Robert Rankin, and Leading Seaman Ronald Taylor.