The RUSI of Victoria Library has been given a valuable letter written by the officer who led the charge of the Light Horse at Beersheba in the First World War. It is accompanied by his copy of The Australian Imperial Force in Sinai and Palestine 1914-1918, Volume VIII of the Official History of the War of 1914-1918.

Through the generosity of Mr Ken Duxbury we are now the custodians of the five-page letter written by the then Lieutenant Colonel Murray William James Bourchier (1881-1937). Commanding the 4th Light Horse Regiment, he made the crucial final assault on Beersheba. On 31 October 1917 he led his men, many of them from his own district, at full gallop over two miles into Turkish entrenchments and on for a further two miles (3.2 km) into Beersheba to capture vital wells before the Turks could destroy them. Lacking sabres, the regiment used bayonets held in their hands as shock weapons. For this exploit he was awarded the Distinguished Service Order and earned the sobriquet ‘Bourchier of Beersheba’. 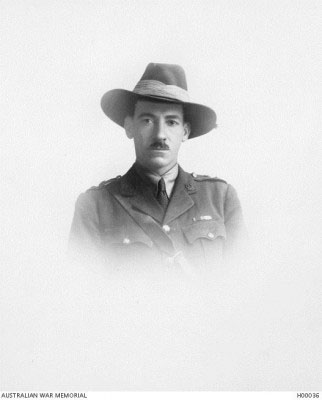 The letter reads:
Syria
20-11-18
My Dear Uncle,
Well the war is over at last and we are all jolly pleased I can assure you. What did you think of our victory over the Turks? For endurance, speed, and fighting our successes out here are considered to be the greatest cavalry triumph in history – Allenby did what Napoleon could not do. We were marching and fighting for 10 days continuously & during that short period our horses carried us over 400 miles which is a record for any cavalry, and in addition to this the horses in some instances had as much as 18 stone up, as well as living on Army rations. The only words I can use was that the whole thing was magnificent. All our plans were masterpieces, and were brilliantly executed, otherwise Allenby could not have captured 80,000 Turks & Germans with all their Army rolling stock, mountains of machine guns, stores etc as he did cleverly. The old 4th covered themselves in glory. During these operations I commanded two Regiments, the 12th Light Horse New South Wales under Lt Col Cameron, DSO and the 4th L.H. under Major Rankin, DSO. These two Regiments were designated “Bourchier’s Force” and we were known as that throughout the operations culminating in the fall of Damascus when both regiments rejoined the Brigade. I may say that the two Regiments did magnificent work, both the Commanding Officers winning their DSOs. I had the honour of being specially congratulated by the Divisional Commander on the work of the Force so you will see I tried to keep my end up.

I often see Norman. He was away in hospital for a while but is quite fit again and back with his regiment.

We are camped quite close to the great mountains of LEBANON which rise to a height of 10,500 feet. The crest line of this great range is covered with many feet of snow.

Col Cameron and I left here about a week ago on a bear shooting expedition on the LEBANONS. There are wolves, brown bears and leopards on these hills so you can imagine the spirit is fairly exciting. We were away three days. Leaving by motor car we travelled by a good road we zigzagged up 4905 feet to the village of BESHERRI. This is the terminus of the road. We were the first two British officers these people had seen. They all rushed round us and frantically proclaimed us as deliverers of their race. We had a tremendous feed, had about 15 girls waiting on us. These girls were chiefly Syrians, Greeks and Arabs and some were jolly good looking too, especially the former. We then discovered that we has set out bear shooting & thought about making a start, but were informed that all the big game were on the other side of the mountains & would take about 5 days to do it properly, so Cameron and I held a council of war with about 200 villagers around as to our next course .So we immediately decided to visit the last forest swarming of the famous cedars of LEBANON which was only two miles from the villages (but these two miles were nearly straight up), The cedars are 6315 feet about above sea level. After slipping and sliding (& swearing I was going to say) we reached the top which proved to be a great plateau, the climb taking 3 hours. A Beautiful forest of about 10 acres is all that is left of those famous forests. Some of these old giants measure about 10 feet in diameter and so thick is their foliage that it is quite impossible in some places to see the sun. I cut a walking stick off an old monster which is estimated to have been an old tree at the birth of Christ. There is no word to describe the magnificent scenery from the foothills to the house of old cedars 4,000 feet up; above lay the great snow line, from which many waterfalls danced in the sunshine and rushing mountain torrents covered with snow frothe tore their way into the ravines below.

The road to BESHERRI was specially made for people to visit the cedars and is a most extraordinary road as in many places it is a mere cutting around the contours of the hills and winds like a corkscrew. The car on some occasions was running along a ledge within a few feet of a precipice from 3000 to 4000 feet deep. We had a good driver but on one or two occasions we advised him to hug the wall.

In a few days we are visiting the great Roman ruins of BAALBEKT which are about 50 miles E of BEIRUT.

Col Cameron I mentioned is a great cobber of mine, he is a station owner on the upper Hunter in N.S.W.

I an enclosing a few leaves of the LEBNON cedars which I picked up during my visit to the hills.

Murray Bourchier later became a brigadier. He was elected to the Victorian Parliament and held ministerial portfolios becoming Deputy Premier for a time. His great enthusiasm was the welfare of returned soldiers. He was posthumously knighted.

A full biography of Brigadier Bourchier is available on-line at the Australian Dictionary of Biography site.