John Charles Merriman Traill was born on 24 January 1880 in Edinburgh, Scotland, the son of George William Traill, book-keeper, and his wife Phoebe Marshall (née Trew). He was educated at George Watson’s College, Edinburgh, and served in the British Army with the Royal Scots and Paget’s Horse during the South African War where he was wounded at Zeerust. Charles claimed to have joined the Bechuanaland Mounted Police after the war. He migrated to Victoria in 1907 but moved to Argentina in 1909 as a Station Manager. In 1913 he returned to Victoria via the Northern Territory, where he gained employment with Mr Milton Wettenhall, at Bretton, Glenorchy, in the Stawell district. 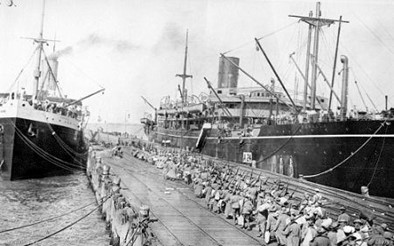 At the outbreak of war in 1914 Charles enlisted on 18 August as a Private and was allocated to the 8th Battalion, 2nd Brigade, Australian Imperial Force. His Next of Kin was shown as his uncle, Captain John Trew of Victoria Parade, Stawell. On 18 October, the battalion left the Broadmeadows Camp on the train for Port Melbourne. By then Charles was a Corporal in a Machine Gun Section. The battalion sailed from Melbourne on the HMAT A24 Benalla the next day and disembarked on 8 December at Alexandria. The following day the 8th Battalion arrived at Mena Camp, near the Pyramids. The AIF had now joined the British Mediterranean Expeditionary Force (MEF). 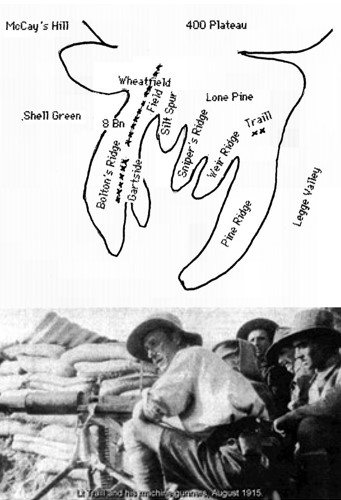 On 3 April 1915 Charles was promoted to Sergeant. On being told of the move to the front, Charles is quoted as saying: ‘We ought to see some grand fighting!’ Five days later the battalion left Alexandria on the Troopship Clan McGillivray for Lemnos Island. The battalion spent almost a fortnight in Mudros Harbour at Lemnos, including several days practicing disembarking from the ship. The Australian Division left Mudros on 24 April, arriving off Gallipoli in the early hours of 25 April. The 8th Battalion landed as a part of the second wave. With the battalion’s two leading companies, the Machine Gun Section pushed well forward, reaching the Turkish position on Pine Ridge. This small force remained forward of the ANZACs for most of that first day. Charles later wrote: ‘My little band of men suffered severely, only five of the originals remaining.’

On 6 May the ‘ANZAC’ Australian 2nd Brigade and New Zealand Brigade were transferred to Cape Helles, to help the struggling British Forces. On 9 May, while at Cape Helles, Charles was commissioned as a 2nd Lt. He would remain as the Machine Gun officer for the rest of his time on Gallipoli. The ANZACs returned to Gallipoli on 16 May. The 8th Battalion was sent to Lemnos for a rest from 12 to 17 July. In August, the British command proposed a new operation to reinvigorate the campaign by capturing the Sari Bair ridge, the high ground that dominated the middle of the Gallipoli peninsula above the ANZACS. The main operation started on 6 August with a fresh landing of British troops 8 km north of ANZAC at Suvla Bay, in conjunction with an ANZAC attack. The Allies mounted an attack north into the rugged country alongside the Sari Bair range with the aim of capturing the high ground and linking with the Suvla landing. To distract the Ottomans from the impending offensive, on 6 August, at 5.30 p.m., an attack was made at Lone Pine by the Australian Division. Lt Traill’s machine guns were in support of the attack on Lone Pine (above).

On 10 September the 8th Battalion embarked for another period of rest on Lemnos on the Troopship Sarnia. On 17 October, while on Imbros, Charles was promoted to Lieutenant. The battalion returned to Gallipoli on 21 November on the Princess Ena. Two days before the last ANZACs left the Gallipoli Peninsula, the 8th Battalion was again shipped to Lemnos.
(right: The MG Section on Imbros) 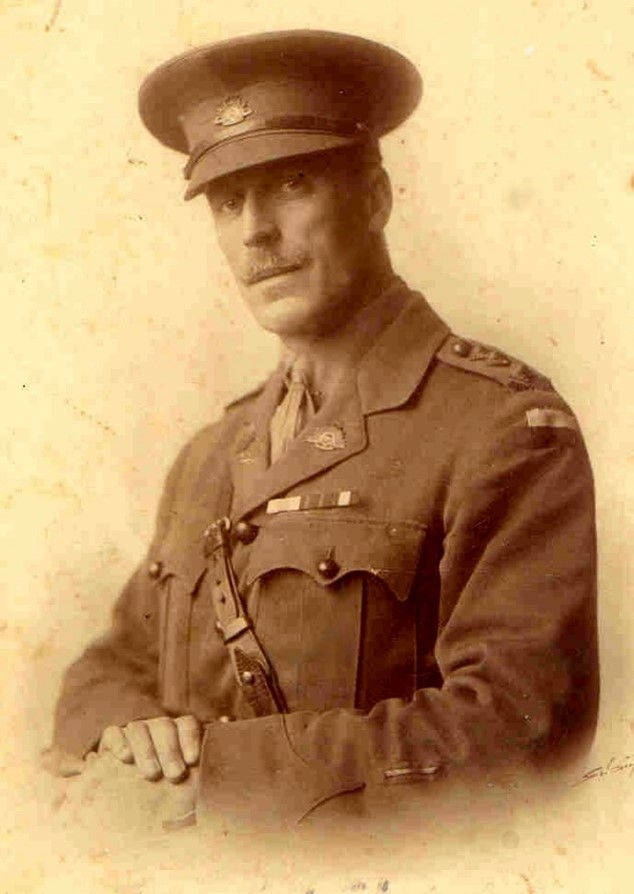 For his actions during the campaign, Charles was awarded the Military Cross and Mentioned in Dispatches for his service at Gallipoli. The battalion spent Christmas and New Year on Lemnos, embarking on the Troopship Empress of Britain on 2 January 1916. The troopship departed Lemnos on 4 January, with the 8th Battalion disembarking at Alexandria on the night 6/7 January. On 7 January the battalion arrived at Tel El Kebir.

From 27 April to 5 May Charles took leave. Three weeks after returning from leave, he was promoted to Captain (right: 8th Battalion). After several moves in the Armentieres area in France, on 24 June the 8th Battalion arrives at Neuve Eglise, near Messines in Belgium. The next move saw the 1st Division return to France, moving to Albert and then into the battle of Pozieres. On 22 July the 1st Division’s attack commenced. The 2nd Brigade was in Reserve. On 23 July the 8th Battalion was ’thrown into the attack’ on Pozieres. Charles didn’t last long. On 25 July he was ‘Placed on the Seconded List’ after, in his words, being ‘wounded, gassed and buried at Pozieres’. Passing through a Regimental Aid Post, a Casualty Clearing Station, a Field Ambulance and a General Hospital, on 27 July Charles found himself at Rouen on the Hospital Ship St Patrick, bound for England. The following day he was admitted to the 4th London General Hospital (formerly the King’s Park Hospital) in Denmark Hill with a gunshot wound to the left arm and ‘shell shock’. It was here that he was attended by a Nurse Georgina Pearson, who would become his first wife.On 19 November Charles returned to France at the Reinforcement Camp at Etaples and on 24 November, rejoined the 8th Battalion ‘ex- hospital’. Early in the New Year of 1917, the Battalion Second-in-Command (2IC) Major Mitchell, transferred to a Senior Officer’s School in England and Charles took over as 2IC. On 12 February 1917, Charles married Georgina McCombie Pearson, born 12 November 1893 at 10 Delta Place, Inveresk (near Edinburgh) at St Mary’s Cathedral Edinburgh. On 8 April Charles returned to England and transferred to the Senior Officers School at Aldershot. Completing the course, he then had 14 days leave, returning to duty on 1 July. On 5 July Charles re-joined the 8th Battalion at Bresle, south-east of Albert The following day he was posted as Officer Commanding B Company. A week later the battalion, as a part of the 1st Division, paraded along on the Amiens-Albert Road for the King’s drive-by inspection.

Charles was next in action on 4 October 1917 during the battle for Broodseinde. A letter from General Birdwood on 28 October described why Charles was awarded a Distinguished Service Order. After the senior company commander became a casualty, ‘you immediately took command of the whole line, which was later held up by direct fire from a 77mm gun. You then worked your way under heavy machine gun fire to a flank, and single-handedly attacked the gun crew, killing five with your revolver, and capturing he gun.’

The battalion spent the rest of 1917 in Belgium. On 16 January 1918 the 8th Battalion moved into the front at Wulverghem, south of Ypres. On 2 February Charles was posted as 2IC of the battalion.

In early 1918, boosted by 61 Divisions released from the Eastern Front after Russia withdrew from the war, the Germans launched a series of attacks trying to break through the Allied forces before the American forces arrived in strength. The first attack was on 21 March and hit to join of the French and British forces. The Germans pushed through many kilometres. On 25 March the Australian 3 and 4th Divisions were sent south to the Somme to help ‘plug the gaps. A second attack commenced on 13 April and was aimed to push through the important railway city of Hazebrouck and on to the channel ports. The 1st Australian Division stopped the Germans at Lys. 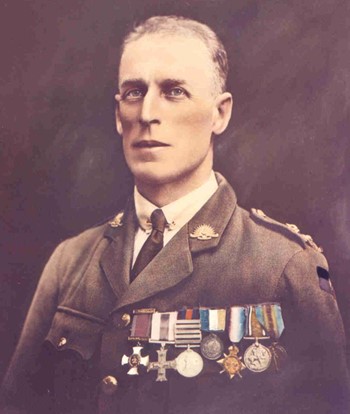 Losses in a battalion were a constant problem, and the loss of experienced men in a battle meant that post-battle a battalion could struggle to operate smoothly. A small number of experienced men were consequently withdrawn from the battalion and held in reserve until after a battle. The group of ‘Left out of Battle’ (LoBs) were commanded by the Battalion 2IC, in this case the now Major Traill. The LoBs left the battalion on 4 June. When the battalion moved forward to partake in the Battle of Amiens on 8 August, the day later known as ‘The Black Day for the German Army’, Charles and his LoBs were held in reserve at Querrieu. They would move forward and rejoin the battalion on 16 August at Criesy-Hamel, east of Le Hamel, the location of the famous Australian (and American) Victory on 4 July. The allied attack pushed the Germans back to The Hindenburg Line and beyond. While the Australians were pushing forward, news of the decision to start sending the Australians home arrived on 12 September. It would commence with those who had enlisted in 1914: the following day seeing some of the most experienced men in the battalion leaving. On 23 September the 8th Battalion was withdrawn for the frontline. Little did they know that their war had finished. On 10 October Charles went on leave to England. He returned to the battalion on 27 October. The following day he was transferred to the 5th Battalion as Temporary Lieutenant Colonel and Commanding Officer. (right: 5th Battalion) His rank was confirmed on 3 November.

On 17 January 1919, Charles again had leave to England, returning to his new battalion on 5 February. 6 March saw him proceed to England where he prepared to Return to Australia (RTA). On 20 March he left France, arriving at Weymouth the following day. According to Charles in the later divorce proceedings ‘we came to Victoria in 1919’. As many AIF members brought wives home with them from the UK, it would appear that Charles, Georgina and their daughter Elenora embarked at Devonport on the Troopship Soudan on 12 May for RTA. They disembarked in Melbourne on 29 June and Charles’ appointment in the AIF was terminated on 10 September. On 20 September 1920, Charles would transfer to the Reserve of Officers.

In July 1919 Charles was living with Mr B Wettenhall, no doubt related to the Wettenhall’s of Stawell, at Clondrisse at Flinders on the Mornington Peninsular. On 29 July he applied for 200 – 400 acres of land in the Flinders area for ‘mixed farming’ purposes. In 1920 Charles purchased a farm, ‘Pinkie Mains’ at Flinders. On 7 February 1922, the couple’s second daughter, Patricia, was born in Melbourne. That year Georgina’s mother, Mrs Jessie Pearson, came to live with them. She suggested to Charles that Georgina was not happy and should return to Scotland with the children. This occurred in 1923. 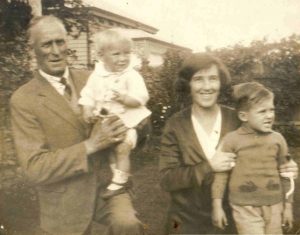 Charles sued for divorce on the grounds of desertion. The ‘papers’ were served on Georgina in Scotland. Georgina’s father had died, leaving her well cared for and on 22 November 1927, Georgina and the girls returned to Melbourne on the Maloja. However, by the time the divorce case was heard on 23 April 1928, Georgina and the girls had left Australia again. The divorce was granted. Charles married Mollie Helen Roche at the Melbourne Registry Office on 8 November that year. By this time Charles lived at Warracknabeal and was a wool-buyer for Charlton and The Wimmera for New Zealand Loan & Mercantile Agency Co. (later Dalgetys). Charles and Mollie would have two sons: Ian Justin, born 17 August 1929 (died Drysdale, 3 March 1989) and Charles Woodwick, born 26 May 1932. (above: family photo c1933)

After the outbreak of World War II, on 2 October 1939 Charles was appointed the Regional Manpower Officer for the Warracknabeal District. Then on 21 April 1942, he was posted as the Commander of the North-East Group of the Volunteer Defence Corps, based in Wangaratta. Sadly, Charles died of heart failure on 12 June 1942. He was buried, with military honours, in Wangaratta Cemetery the following day.