Jim Bourke looks frail but dignified in a comfortable chair. To a steady drumbeat, unseen equipment delivers oxygen to the retired lieutenant colonel’s cancer-ridden lungs. Bourke is in a buoyant mood on a grey day in Melbourne. His missions in life are now largely accomplished.

His daughter, Sarah, and a few good mates — Gordon Peterson, Peter Aylett and Paul Darrouzet — sit by his side, smile gently at his jokes and anecdotes, and nod respectfully at the war stories.

“Every day is a bonus — it’s been my mantra since then,” Bourke says. By way of explanation, he points to a Vietnam War photo of him getting battlefield treatment for a bullet that tore through his mouth and exited below his left ear in January 1966.

“It took my mind off sex for a few minutes,” adds Bourke. A glutton for punishment, he recovered and returned to Vietnam in 1968 for a second tour.

Bourke is dying. Every hour is a bonus. He understands death and grief better than most. He has been close to violent death. He knows better than most its effect on those left behind.

His heroism as a platoon commander with 1 RAR in the Vietnam War in 1966 should have killed him. He was shot while trying to save a wounded soldier, and won a medal for gallantry. But afterwards he lost himself in gin and what he reckons was survivor guilt. For a long while back in Australia, he says, he “wasn’t travelling too well”.

Four decades later, he led his most important mission — to find and bring home the remains of six missing Australians: Richard Parker, Peter Gillson, David Fisher, Michael Herbert, Robert Carver and John Gillespie, left behind in Vietnam where they fell.

It was Bourke who, in the early 2000s, used his initiative and resources, did thousands of hours of research, lobbied politicians and bureaucrats, and, when that failed, led a privately funded team to try to locate the missing six. Peterson and Aylett, Vietnam veterans, were vital to this mission. Darrouzet, who could not fathom why the government was not doing all in its power to bring back the men, stumped up cash.

“Jim Bourke is a genuine hero, not just in the war but in finding those six Australians who fell in battle years later,’’ says Darrouzet, a wealthy former Queensland coal company owner. “You sometimes wonder, ‘Would I be good enough to go over the top?’, then you hear about six blokes who were good enough and who died in the fight in Vietnam, and their government said ‘too hard’, and left them there for almost 40 years.”

Bourke’s refusal to go away — the single-minded determination that distinguished him in Vietnam — eventually would bring success, and embarrass the government and Defence chiefs into decisive and long-overdue action.

As Bourke saw it, Australia had sent those six young men to war on a one-way ticket. In failing to bring home what was left of their bodies, the ultimate sacrifice they had made was not being honoured. He regarded it as a national disgrace.

When Bourke and his team in 2007 found the remains of two of the missing six, Defence could no longer shirk its duty. Bourke and his like-minded mates had ach­ieved results the experts predicted were impossible. They were making officialdom look bad. A new collaborative effort with Defence resulted in remains of the other four being found, carefully repatriated to Australia, and laid to rest with public and family ceremonies, political pomp and overwhelming community approval.

In the ABC’s Australian Story in 2007, Carmel Hendrie, widow of lance corporal Gillespie, who had died in a helicopter crash in Vietnam in 1971, says of Bourke: “I just hope that he is at peace with himself because it’s not an easy job, what he’s doing. He must lay awake at night-time thinking, ‘Oh my god, have I got to find another body, have I got to face another family member?’ He’s the one who’s helping us to get to an end and an end is what we want, one way or the other.”

Asked now about his own peace, Bourke, who had been on the same operation as the first two of the missing six in November 1965, tells The Australian: “It gave me a better understanding of how people, including myself, might deal with this loss of a loved one.”

In the years since the missing six were brought home, Bourke has been on a scholarly path, researching and writing about the military, political, social and cultural tensions that have had a bearing on Australia’s approach to its war dead.

His newly completed PhD thesis, Living With Unresolved Grief and Uncompleted Tasks: Achieving Closure Around Ambiguous Loss and Traumatic Events During Wartime, is dedicated to his father, John, “whose funeral I was not permitted to attend”.

It is a clue to the personal demons that helped drive him to recover the missing six. Bourke was 13 when his “best mate”, his dad, a mechanic, became gravely ill at home in the Queensland town of Ayr, near Townsville. It was 1958.

“My father and I had a particular bond,” Bourke says. “We used to hang out a fair bit. But he got pneumonia. I saw that he was quite ill and I said to Mum, ‘We have to get Dad to the doctor.’ She went next door to the neighbour’s house because they had a telephone, rang up and got the ambulance. They wouldn’t let me in it. It was three miles to the hospital and I was as fit as a mallee bull so I ran it. I had this special attachment to my father. I was there when he died.

“Back in the 50s it was not the practice, in north Queensland anyway, to go to your father’s funeral. I always thought he was coming back because I had not had that finality from seeing the coffin being lowered into the ground.

“You might find this difficult to believe but for 40 years my father would come back in my dreams. I would get up and say to my mother, ‘Dad and I are going fishing’ and Mum would look at me and say: ‘Jim, Dad’s dead’. I wrote my father a letter in the late 90s, believe it or not, asking him to lay off me. And he has.

“It might seem unusual for the people sitting here, but in the course of being troubled by a situation, you have to sort it out, so I wrote this letter. I hoped to put it to sleep, psychologically. It seems to ease these things.”
Bourke’s 110,000-word thesis draws on dozens of interviews with family members of the missing six, defence personnel, Australian veterans, former North Vietnamese soldiers, war records and his own experiences with his Operation Aussies Home. It is a measured and powerful body of work that also addresses what he sees as ongoing ambiguity in policy about the duty to bring bodies home from future conflicts.

His study describes the “psychological and physical effects of the men’s loss on members of their families and on their comrades”. He writes: “The grief arising from wartime losses affects society for many years after hostilities end. We see symbols of grief and mourning around the former battlefields and across Australia, in the cities and hometowns of those who died serving the nation.

“The hearts of the men and women who lost loved ones or comrades were terribly scarred, especially when no mortal remains were recoverable. Across the nation, citizens have an obligation to these fellow Australians, to understand their grief and to lend support where they can — and the nation has a moral obligation to the missing themselves, to recover and properly commemorate them.”

Bourke’s tone is not angry but he does not pull punches over bur­eaucratic and political inertia. At the heart of his story, and his life’s mission, is, he says, a concept most people know as closure.

With the missing six, he says, the men’s recovery “categorically confirmed their death, enabled the families to conduct funerals, afforded the rite of passage to the dead and enabled family members and others to re-engineer the social spaces in which they continued to connect with the dead”.

It was positive, too, for comrades who had experienced guilt over abandoning the men in Vietnam. Bourke says the recovery of the remains “represented the ultimate act of reparation”.

Bourke is unflinching in examining the reasons it took four decades to recover the six men. He describes how the Australian government sent a mission to Vietnam in 1984 “to provide the fullest possible accounting of the last known circumstances” of the six men. The failed mission lasted 17 days, of which four were spent in the field, and it subsequently reported “there is no point in initiating further investigation of the circumstances surrounding the disappearance of (the men)” while the question of missing Australian servicemen “should not be an issue in the bilateral relationship”.

Bourke believes one of the 1984 mission’s outcomes was “to give the authorities the opportunity to dismiss the need for further investigation, on the basis they had already investigated the cases”. Official interest in the six evaporated after 1984.

Bourke says: “Despite serving for 23 years in the Army and retiring as a lieutenant colonel, I never accepted authority very well. As a general philosophy, I subscribe wholeheartedly to the timeworn Australian adage that everybody deserves a fair go.”

It was increasingly clear to him “that the achilles heel within the bureaucracy was the government, specifically the ministers”.

In contrast to the Australian authorities, Nguyen Van Bao, a Vietnamese commander, wanted to help Bourke’s team because, as Nguyen explained, “when the soldier is dead, he is no longer the enemy”. Bourke says Nguyen, whose advice was invaluable in pinpointing the scene of a key battle, demonstrated a common Vietnamese trait: respect for the warrior.

Bourke writes: “The gravitas of Australia’s leaders, so obvious at times when they wish to praise the sacrifices of service personnel, appeared to evaporate when confronted with deciding whether to do anything about these six MIAs from Vietnam.

“It appears Australia was able to sweep the remains of the missing under some metaphorical carpet. Blight on Australia’s national identity was evident — Australia lost her spirit. The apparent lack of interest in the recovery of the missing during the second half of the 20th century reveals a cultural undercurrent of amnesia around Australia’s missing war dead.

“This undercurrent survived during the last two decades of the 20th century despite the patriotic resurgence of interest in commemorating Australians’ wartime sacrifices.

“Searching for the missing, beyond initial battlefield clearance, was a priority of neither the Australian government nor the Australian Defence Force, and this underlying philosophy was formalised in ADF policy in 1996. The situation around the (42) Korean War MIAs and the six MIAs from Vietnam clearly reflects this dilemma.”

But by 2007, following the breakthrough recovery by his group of Parker and Gillson, the debate changed fundamentally.

There were accolades and congratulatory messages from then prime minister John Howard, Defence chiefs and other VIPs. The RSL made Bourke its 2008 Anzac of the Year. The loved ones of the first two were generous in their praise, and by 2009 the remaining four had been retrieved and repatriated.

Aylett says none of it would be possible but for the dying soldier sitting nearby.

Bourke has one regret — he will die before the remains of any of the 42 Australians missing from the war in Korea are recovered.

“Well, they should get off their arses and use their diplomacy to engage the bastards.” 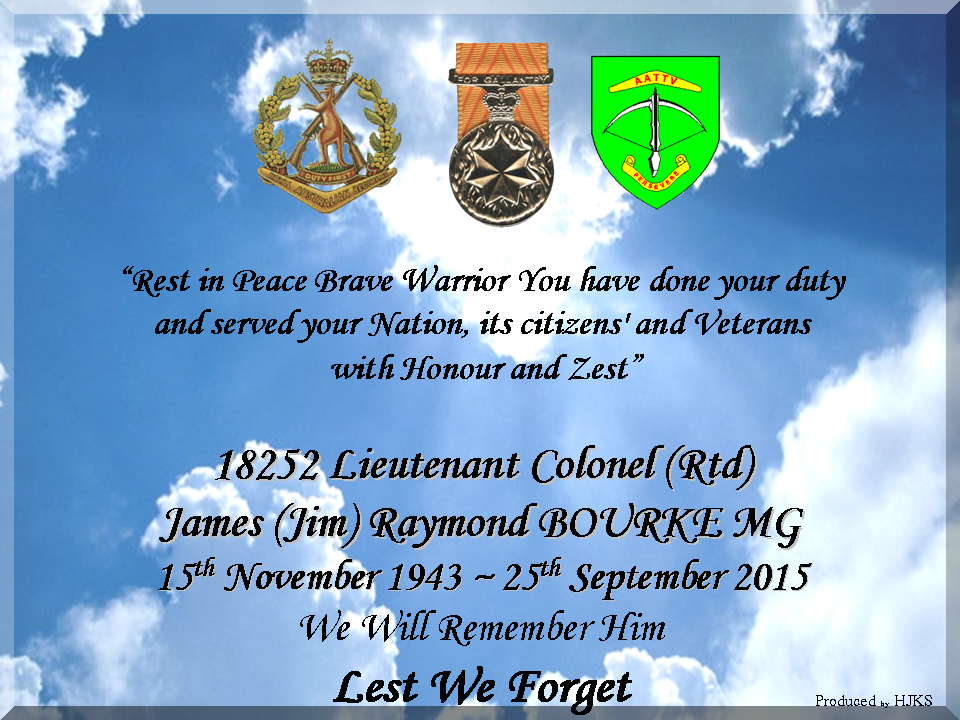