Long Tan: The Start of a Lifelong Battle by Harry Smith – Book Review

Long Tan, August 1966, was chosen as the seminal Australian Vietnam battle by the Vietnam Veterans’ Association for a very good reason. It was a David and Goliath fight of “68 Aussie Nashos and near 40 tough Regular Army, and with them three well-practised New Zealand Artillery Battery Forward Observer party” under the tough but sure command of Major Harry Smith. It was a 15 to one fight against some 2,000 of the North Vietnamese Army. Smith’s company won with the loss of 17 dead while the Vietnamese lost at least 1,000, although that number wasn’t known for many years.
The Battle of Long Tan is the centrepiece of this book balanced by a fascinating description of Smith’s personal journey from childhood, through his development to company command at Long Tan ending with later service to retirement.  Smith’s lifelong battle really begins after retirement as he fights for recognition of the men who fought with him at Long Tan.
Harry reveals his early years in Tasmania. He was almost born to the military, loving soldiering from the minute he donned a cadet uniform.  Starting near the bottom in the regular army as an NCO, he went to the six month course at Officer Cadet School in 1952. Throughout the book Harry chafes that Officer Cadet School graduates were treated as a second class compared to the four year professional Duntroon officer graduates.
Lieutenant Smith learnt his jungle craft and company command during the Malayan Emergency. And he must have been good, for by 1958 he was promoted to captain four years early and put in charge of a platoon back in Sydney.  As time went on he learnt to parachute and moved to the commandos. He studied hard and trained hard to increase his qualifications. There was hardly any time for his family, although Harry was a bit of a lad and played around some.
In 1965 he was transferred to 6th Battalion Royal Australian Regiment (6RAR), in Brisbane and given command of Delta company, the same company he commanded in Vietnam. He trained his company hard as a commando would and sorted out the chaff because he knew what they could expect in the jungle. The description of the preparation and his take on the equipment (usually poor) during training and in Vietnam is fascinating.
His company arrived in Vietnam in 1966 which was early in Australia’s engagement. It was lucky that Delta Company was so well trained, for while on patrol they ran smack into the North Vietnamese Army that intelligence said wasn’t there. During battle, Smith met huge resistance from senior command to take the fact of the engagement seriously.  Maybe it was that command was in denial that they had missed the build up of Vietnamese forces; maybe they were distracted by a big show due in camp that night; maybe it was the age old problem of inexperienced new commanders out of their depth; or maybe it was a touch of arrogance of the Duntroon officers about OCS graduates. Harry canvasses all of these options. In any event, Delta Company was lucky to make it through as every bit of official support Australian support was grudging and late. They owe their lives to deadly accurate fire support from NZ artillery and some heroic chopper pilots who decided on their own volition to fly in much needed ammunition.
Success has many fathers. So the wash-up of this was that the men at the top, including the senior foot draggers back at base, grabbed the most significant medals while the fighting men were lucky to be left with minor honours, if at all. The news of just how badly Harry and his men fared in the honours stakes had to wait until the 30 year secrecy period was up in 1996. Righting this wrong has been Lieutenant Colonel Smith’s (ret) passion and life long battle ever since.
Smith is no glory hunter; he comes across as a very experienced commander in a jam trying to look after his men both then and now. The book is packed with military detail from a tough humble practical man who knows his stuff. It is gripping gritty, no nonsense reading. 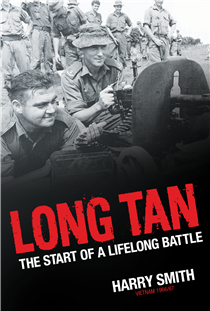