On 14 April 2016 Dr Mark Johnston was MHHV’s monthly Military History Speaker. In it he answered the question “Why did General Montgomery, commander of the British Eighth Army, call the 9th Australian Division ‘magnificent’?”

Dr Johnston, author (with Prof Peter Stanley) of Alamein: The Australian Story, one of Australia’s leading experts on the Second World War, explained the role of Australian forces in the great turning point battle of the war in July-November 1942.

This lively and very informative presentation was supported by an extensive selection photographs and anecdotes along with artefacts Dr Johnston collected on visits to the site of the battle. 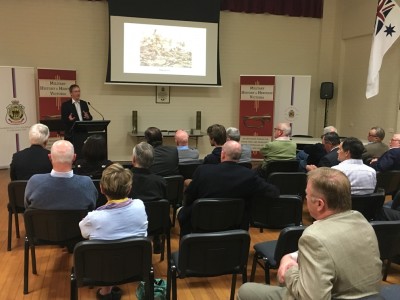 As Dr Johnston explained, times were desperate for the British in North Africa in early 1942. The crack 6th Australian Division had been sent to Greece leaving behind a rag-tag collection of Australian battalions and brigades to face Rommel and the Afrika Korps. The Australians were assembled into the 9th Australian Division under Brigadier-General and soon to be Lieutenant-General Sir Leslie Morshead. This untried and poorly trained division cut their teeth at Tobruk where they became the first force in the world to repel Rommel’s Blitzkrieg. It was at Tobruk they developed a fearsome reputation for tenacious, give no quarter, close in bayonet work. They were especially fearsome on night patrols. Rommel and his men developed a deep respect for Australian capability.

When Montgomery took over command of the British 8th Army, to which the 9th Australian Division belonged, he instantly recognised Australian capability and honoured them by placing them in the north over the key coast road around Trig 29 for the Second Battle of El Alamein. Having faced the Australians before, Rommel identified them as a critical threat. Fearing the Australians would break through in the north Rommel kept his elite forces in the area to keep them at bay. Through this battle the under strength Australian force held off and then beat the most concentrated and capable German force in the Middle East.

Despite heavy losses during the battle the Australians held on tenaciously. An Australian NCO wrote in his diary that he was dirty, tired and had not closed his eyes for 128 hours but, despite the dead comrades all around him, he was still cheerful because they were still having victories. The toll on Australians was frightful. The Australians made up 10% of the British force but took 20% of the casualties.

Even before the hostilities ended British Lieutenant-General Horrocks sent a letter to Morshead complementing the Australians on being the lynch pin of the battle. Montgomery praised the Australians immediately after the battle and in a book he wrote about the battle he singled out the Australians for praise by saying that he could not have won in twelve days without the magnificent contribution of the Australians.