Frank Walker, a journalist for 38 years and the author of two best selling investigative books about the Vietnam War, has written a highly critical account of the British nuclear weapon tests in Australia. In 1950 Prime Minister Robert Menzies agreed to a British request to conduct atom bomb tests in Australia, apparently without consulting his Cabinet, thereby beginning a secret program which contaminated the Maralinga test site, allowed radioactive fallout to drift across much of Eastern Australia and exposed many servicemen to dangerous levels of radiation.
In 1950 it was believed that small doses of radiation were not dangerous and the radiological safety standards for the first tests were correct for the time, but by 1956 it was realized that any exposure to radiation involved risk. Unfortunately the safety standards were sometimes willfully or even recklessly ignored, and this is the story of what went wrong. With nuclear war with the USSR a possibility, decisions were made to expose servicemen to unknown levels of radiation, either to collect essential data or to see whether soldiers could operate on a nuclear battlefield.
Frank Walker interviewed many veterans of the nuclear tests and their stories make harrowing reading. Some were deliberately sent into contaminated areas to collect debris, to roll in the sand or to operate a Centurion tank only a few hundred metres from ground zero shortly after the explosion. The British Government had been advised that aircraft must avoid flying through the visible cloud following an atom bomb explosion, but the advice placed in the hands of the RAAF was that the radioactive hazard to aircrew was negligible and that aircraft would not become contaminated. As a result, under British direction, non-airtight Lincoln aircraft were ordered to fly through the rising mushroom cloud immediately after the explosion.
The first atom bomb was exploded in the frigate HMS Plym, anchored in a lagoon at the Monte Bello Islands. There were alarming deviations from the safety procedures: fish found floating in the lagoon after the explosion were collected and eaten, and fragments of the hull of HMS Plym were collected by hand.
Almost unbelievably, six sailors and two scientists in a motor boat sheltered from the 25 kiloton blast behind an overhanging cliff only three kilometres from ground zero. All other ships were at least 10 nautical miles distant.
The test site was then moved to Emu Field and finally to Maralinga in South Australia, where the most contaminating tests were carried out. Attempts to exclude the Aboriginal inhabitants from the test area proved an impossible task and it is likely that some suffered as a result.
The book also exposes the secret programs to monitor fallout and to collect bones from deceased infants to check for radioactive strontium-90, attempts to tell the truth about what had happened, the two major attempts to clean up the test site and finally the conclusions of the McClelland Royal Commission.
The RUSI VIC Library wishes to thank the publisher for providing a copy for review.
Reviewed by Roger Buxton for RUSI Victoria. 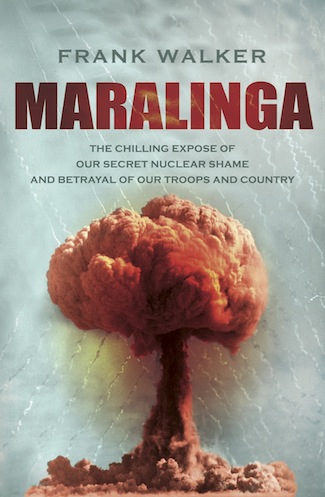