At the beginning of 1918, three years of fighting and destruction had failed to produce any clear result on the Western Front.
The Eastern Front had collapsed following the October 1917 Revolution in Russia, allowing Germany to redeploy troops from that Front to the Western Front.

It was expected that Germany had the upper hand and would launch a major offensive in the spring.

Both sides sensed that 1918 would be decisive…yet neither side could be assured of victory.

About 117,000 Australian men were in France at this time, constituting about one-eleventh of the overall British armies.
Over the winter of 1917-18 the five Australian divisions were reorganised into an Australian Corps, initially commanded by General William Birdwood, but eventually replaced by Lieutenant General John Monash.

As well as the servicemen of the army, navy and flying corps, many other kinds of personnel made up the AIF, such as medical personnel and chaplains.

How could the anticipated German offensive be beaten? What technology and tactics could be applied? How might the reorganisation and retraining of the Australian Corps contribute to this anticipated battle? What would be the consequences of failure? All these questions hung in the air as winter slowly turned to spring in early 1918.

‘Masters of War: the AIF in France in 1918’ considered these events from the strategic to the tactical level, and placed the AIFs capability and contribution in a wider context.

In the last year of the Anzac Centenary  many of the nation’s best historians spoke on this important national issue.

As Patron of MHHV it is my privilege to offer my thoughts on what I consider was an excellent conference. The title was ‘WW 1 Masters of War’ but who were the Masters? We have been presented with an excellent programme with such diversity as to the development of the ‘tank’, to the inclusion of the ‘air’ element. We received presentations on the AIF’s major battles of 1918, an erudite overview of the politico/strategic situation, the perspective from the German point of view and the difficulties with logistics experienced from both sides.

Turning to the programme: The Opening Remarks by MC, Brent Taylor, set the scene for the day and to his credit he managed the day’s timelines up to the last presentation and a lively question time which got a little out of hand!

Dr Chris Clark, as keynote speaker, provided a superb historical overview of the range of the presentations within the context of the world view and the perspective from the hindsight of 100 years. He didn’t steal the thunder of the following presenters, rather just whetting our appetite. 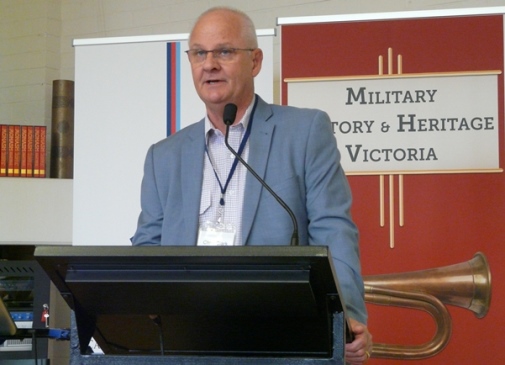 The second speaker, Dr Lucas Jordan, provided an excellent insight to the how and why of the development of the ‘Monash’ misnomer of ‘peaceful penetration’; better described by Lucas as the ‘Stealth Raiders’. The purpose was to harass, kill and capture prisoners to provide intelligence and to overcome the boredom of the stalemate of trench warfare. A direct result was to strike fear into the enemy minds. It was the natural aggressive fighting style of the ‘Aussies & Kiwis’. 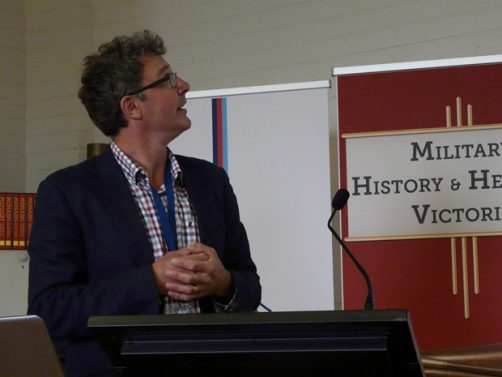 After morning tea Dr Steven Welch provided a fascinating expose of the German situation; the relationship between the Military masters, politicians and the civilian population. He explained the background options their military had leading up to Operation Michael and why it was ‘the last throw of the dice’ before the Americans seriously entered the war. Further Steven provided the reasons behind the massive offensive’s failure. 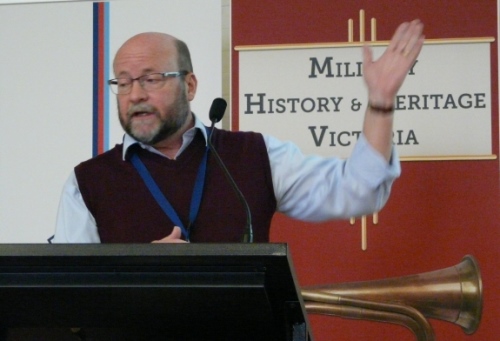 Dr Aaron Pegram provided us with an incisive presentation on how the AIF in May/June 1918 blunted the German offensive and defended the critical rail junction of Amiens. He explains how the separate Divisions and Brigades of General Birdwood’s ANZAC Corps, at that stage, were used to strengthen the Defence line and exhausted British troops. 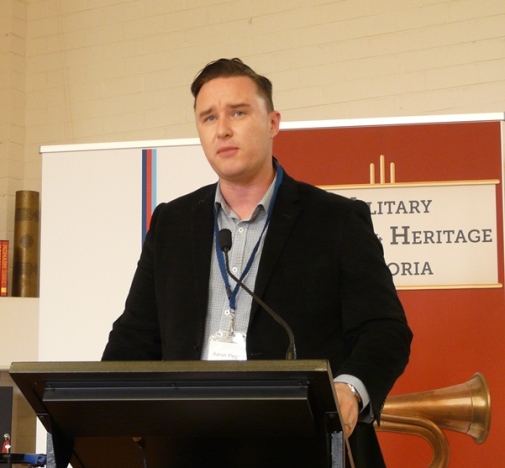 The AIF and the defence of Amiens, March – April 1918 – Dr Aaron Pegram

After a satisfying lunch the animated Dr Ross McMullin gave us the Pompey Elliott version of the AIF’s involvement in the 2nd Battle of Villers-Bretonneux, setting the scene of how AIF Brigades rushed to the area and then waiting before the British HQ admitted defeat including the 14 hour delay before coming to that conclusion. The Counter Attack by two independent Brigades from different Divisions against all odds, succeeded. Monash, who had no involvement, stated “it was the greatest feat of arms by the Australians to that date”. 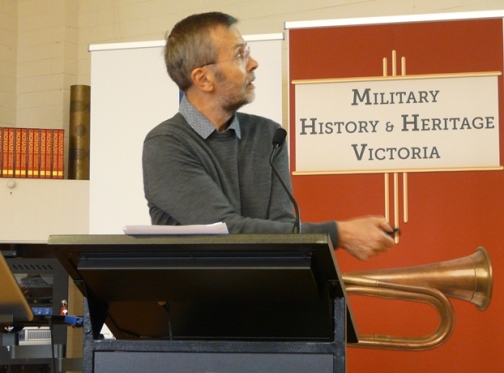 The AIF and the second Battle of Villers-Bretonneux, April 1918 – Dr Ross McMullin

Then for a change of emphasis, Dr Michael Molkentin, presented an enlightening view of the development of Air Power from the ‘experimental’ in 1914 to its technical development by 1918; noting it was not ‘strike power’ in its own right yet! But, certainly another weapon in the ‘joint operations’ of the Australian Corps. 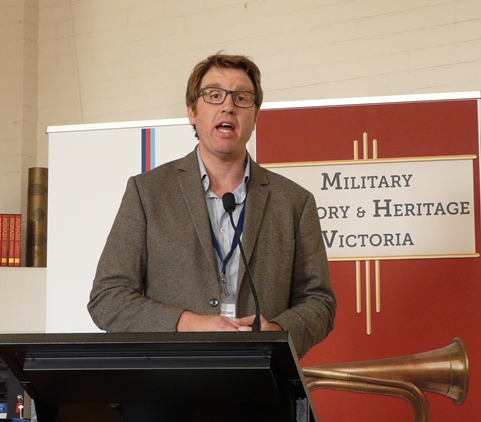 Air Power and the Australian Corps in 1918 – Dr Michael Molkentin

David Brown then provided another enlightening presentation of another emerging weapon for AUS Corps joint operations, the ‘Tank’. His presentation highlighted the development of the ‘chain track’ tractor from as early as 1905 in the UK, also USA, Germany and even in Australia in 1913 through to the serious prototypes of 1915/16. He then turned to how their tactics evolved, especially with Monash’s AUS Corps from April 1918. 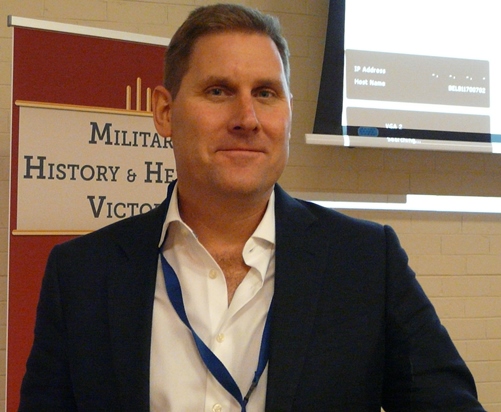 Tanks! The Application of Armour in 1918 – David Brown

Finally Dr Andrew Richardson gave a detailed account of the 4th of July Le Hamel plan which was to be an enabling operation. It was Monash’s model or blueprint of Joint Operations, as we know it today, for the Battle of Amiens on 8-10 August that ‘changed the tide’ of WW 1. It was truly the beginning of the end! 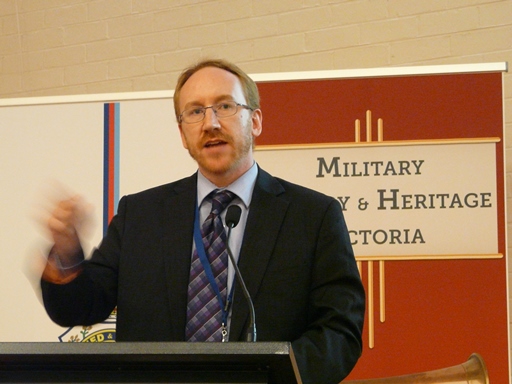 Hamel and the Battle of Amiens: The Australian contribution to Allied offensive operations in 1918. – Dr Andrew Richardson

In the final question time we heard quite a few interesting answers and comments for which I must thank you the audience as it is my measure of the interest in the subject matter of the Conference. You will be able check the detail of what has been presented as all the proceedings will be published on our website.

The Masters of War were not the Generals on either side, though Monash and Currie ‘give it a run for their — ‘but more the combat armies of all nations, including ‘on the job’ training, experience and development of weapons and tactics. Against this was the horrendous loss of life to all nations. The other unanswered question is ’why an Armistice and not Unconditional Surrender?’ that allowed Hitler to use his myth ‘that the German Army was never beaten’

I wish to thank all the speakers for their contribution to the proceedings and especially our President and convenor, Marcus Fielding, for his oversight of the Conference, and our MC Brent Taylor. May I also thank on your behalf Peter Fielding for the RSL’s arrangements, especially the victuals, and my fellow Committee members who make these events possible.

So ends from my perspective another successful Conference and I again thank you the participants for your obvious interest.

Finally check out our Website at www.mhhv.org.au for upcoming events and our speaker program for 2018.

I have thoroughly enjoyed the day and your company. Thank you and safe home.

Click here for more photos from Masters of War