In his presentation to an audience of 30, Michael Veitch, actor, presenter and author, brought to life the exploits and tragic sacrifices of the Australian heroes during the Milne Bay campaign of 25 August to 7 September 1942.

September 1942 marked the highpoint of Axis conquest in World War II. In the Pacific, Japan’s forces seemed unstoppable. This small but key battle saw Japanese land forces suffer their first land defeat of the war and presaged that the tide was about to turn. 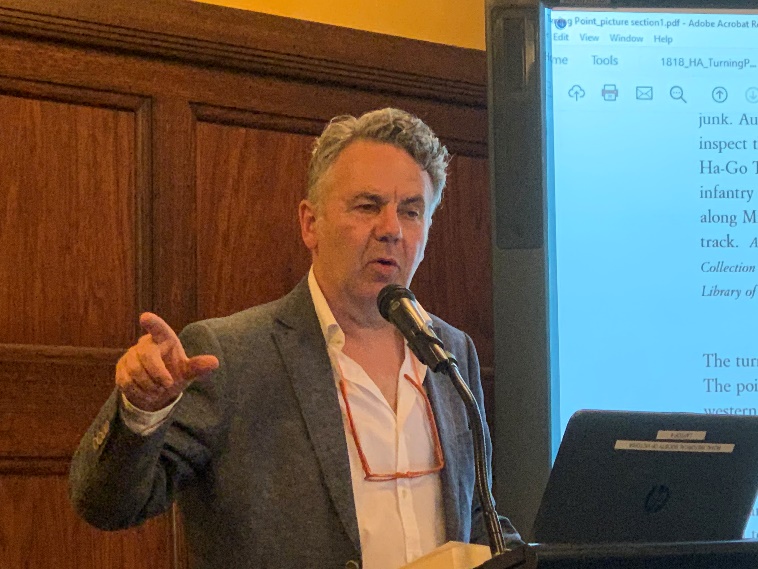 One of the Japanese tactical objectives was to launch harassing sea and air raids on Australia and its maritime supply lines. Japanese air bases were to the north of New Guinea. Without a base nearer Australia, their raiding capacity was reduced as their planes had to fly a very difficult and dangerous route over the extremely high Owen Stanley Ranges. The Japanese decided that a base at Port Moresby would solve this problem. Taking Milne Bay would have allowed Japanese planes easy sea level attack routes to the port as well as a base to attack shipping lanes to Australia.

The Japanese had already been defeated in their first attempt to take Port Moresby in the Battle of the Coral Sea in May 1942. After that their forces fought their way across the Kokoda Track but it was always a vain hope because even in the unlikely chance they managed to cross and take the port, they could not be supplied sufficiently via that route.

The Australians recognised the value of Milne Bay as a forward air and sea base for both themselves and the Japanese. They decided to construct airfields there before the enemy did. Milne Bay may have been strategically located but it was a terrible place to build and hold anything because it suffered over three metres of rainfall a year. It was so wet that it was near impossible to keep fires going. Everywhere the ground was a quagmire while a plague of anopheles mosquitoes bred in the fetid swamps and spread a particularly virulent strain of malaria. A large proportion of the force was sick at any one time. Airfield construction and operation was only made possible by using American supplied Marsden Matting consisting of large interlocking steel sheets that ‘floated’ on top of the mire. Even then mud splashed up onto planes during take-offs and landings doing considerable damage.

By the time a Japanese reconnaissance plane spotted the works at Milne Bay, two airfields were complete and a third was under construction by American engineers. With Port Moresby still an objective of the Japanese and the presence of completed allied airfields at the far eastern tip of Papua, Milne Bay became an even more tempting conquest.

The Japanese decided to take over the position but seriously underestimated the size of the defending force as they landed only 1,900 men and two small tanks. This paltry number of enemy crack Japanese naval infantry shock troops may have been enough when pitted against green Australian Militia but it was seriously under strength once veteran Second Australian Imperial Force units arrived. That brought the defenders’ establishment numbers up to 8,800 including two vital Australian squadrons flying Kittyhawks.

The Japanese expected to walk in and take the airfields but fortunately for the defenders they landed some seven miles out of place with virtually no air cover. The imbalance in airpower meant the battle became quite distinctly different in character between day and night. During the day Australian Kittyhawks flew multiple sorties strafing every enemy they could find. This meant the Japanese ships had to leave the bay to get out of range before dawn leaving the Japanese invading force to lay low. During the night the Japanese ships would come back into the harbour to resupply their forces while their land soldiers advanced and fought the Australians. At dawn the Japanese would pull back again and hide. Everywhere the fighting was brutal. After the initial Japanese advance, seesawed backwards and forwards along the coast.

After some days of engagement, the Australians decided to push forward to make a stand at KB Mission close to where the Japanese had landed. Up until then the Japanese tanks had been a great advantage to the enemy but luckily became irretrievably stuck in the mud and abandoned.

Arriving at the Mission, the Australians attacked with bayonets drawn. In this advance they came across their first instance of Japanese pretending to be dead only to rise up and slaughter the passing the Australians. From that time, it became usual practice to bayonet Japanese ‘corpses’ as they found them.

Bit by bit the Australians gained the upper hand and the Japanese, weakened by lack of air cover, began to pull their men out. The final Japanese retreat was chaotic because they had not been trained for this eventuality. As they left, they shot their own wounded soldiers.

To the Australians’ horror they came across the mutilated corpses of their captured comrades who had been tortured while alive.

The Battle for Milne Bay was both the first victory for the Allies and a significant turning point in the Pacific War because, amongst other things, it showed the Japanese weren’t supermen and could be defeated on land. Michael Veitch noted that while the battle received worldwide publicity at the time, it has since been largely forgotten. He further noted that this would not have happened if it had been an American victory. 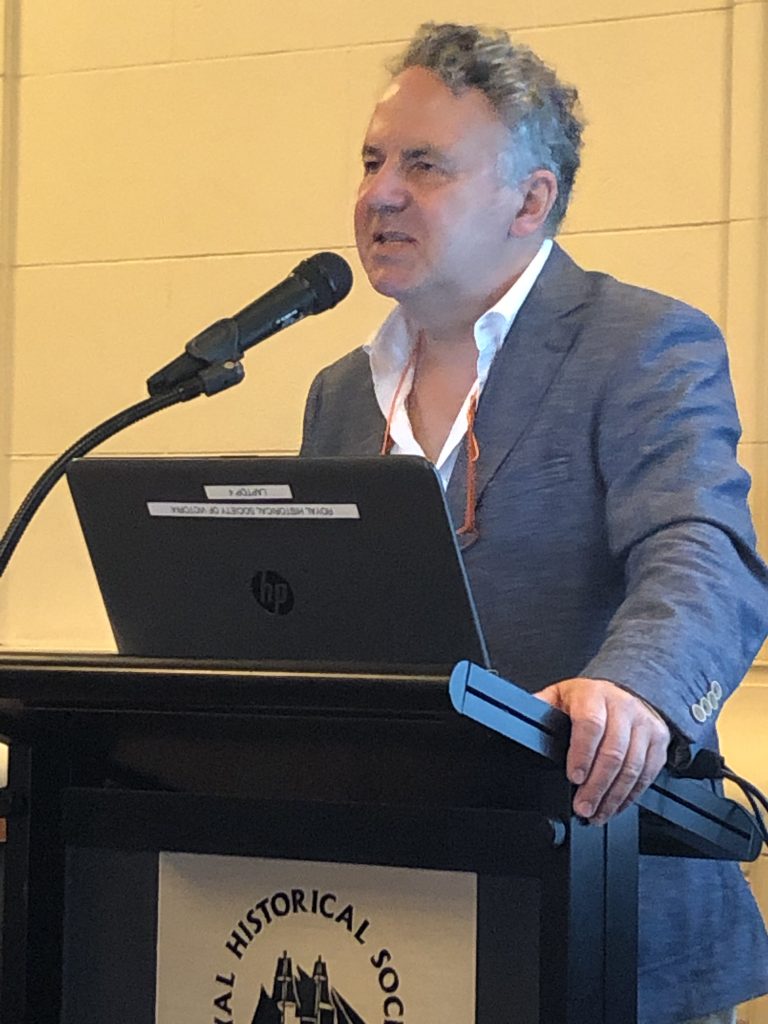 About the presenter
Michael Veitch is well known as an author, actor, comedian and former ABC television and radio presenter. He appeared on the sketch comedy television shows The D-Generation, Fast Forward and Full Frontal, His books include the critically acclaimed accounts of Australian pilots in World War II, 44 Days, Heroes of the Skies, Fly, Flak and Barney Greatrex. 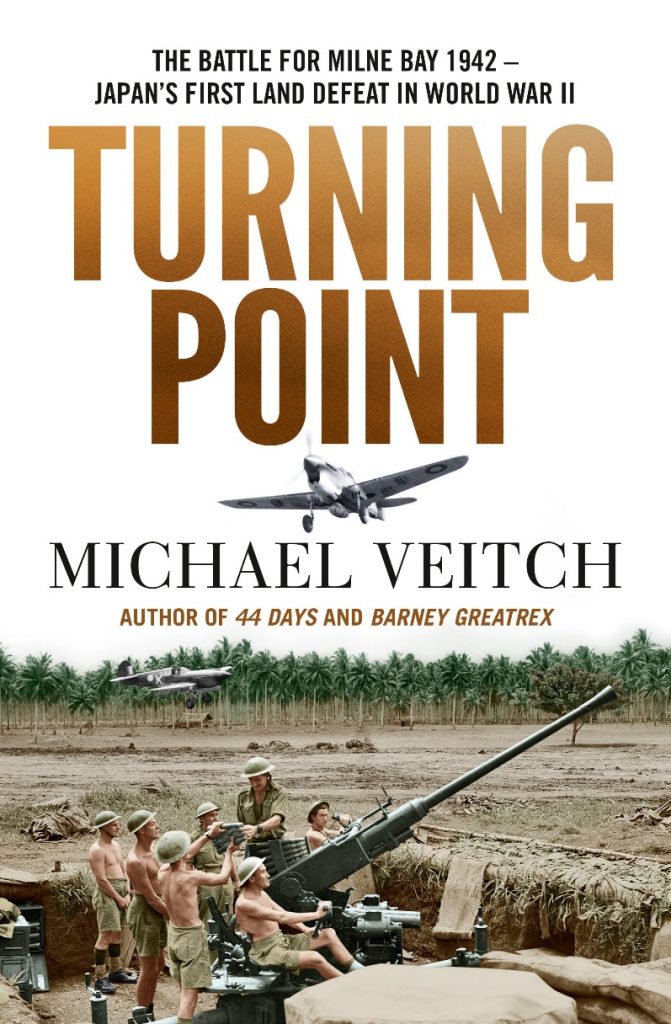