Professor Edwards presented a fascinating review of some of the many myths surrounding the Vietnam War to an audience of 50 at the Pompey Elliott Memorial Hall, Wednesday 15 March 2017. He explained that even 50 years after Australia’s most controversial conflict of the twentieth century, many half-truths still exist.

Perhaps the most persistent myth is that Australia is always fighting “other countries’ wars.” It is usually believed Australia fought in Vietnam only at the request of the Americans and then only because the US provided a defence insurance policy. While there is some truth in the insurance policy proposition, it was pointed out that Australia had a pressing need to be engaged alongside the American military because of the much closer but rarely talked about threat posed by Indonesia.
At the time Indonesia was the third largest communist country in the world after China and Russia. In addition, Indonesia was both expansionist and exporting guerrilla fighters. Critically, it shared a land border with Australian territory in West Papua New Guinea. America was reluctant to provide more than logistic support to Australia for any problems Australia had with Indonesia. Potential problems with Indonesia caused Prime Minister Robert Menzies a great deal of private angst although it was not talked about all that much in public. It was because of this threat that Australia needed a paid up insurance policy with the Americans and consequently Menzies pushed for Australia to help the Americans in Vietnam.
The other great myth was the Domino Theory. This theory proposed that if one nation fell to communism then so would the next one in line and so on until much of the world had succumbed. Post WWII, communism did expand, so initially the theory looked plausible but by 1968 the theory had become discredited in high level strategic circles. Key to debunking the theory was the fall of communism in Indonesia. Another was that the fractious separation of Singapore from Malaysia resulted in a more amicable relationship between the two rather either of them falling to communism.
There were two other factors for the spread of communism stopping. Allied experience in the region, particularly in WWII, had thus far had been directed against islands and archipelagos. It wasn’t appreciated how much the benefit Vietnam gained from having land borders with China, Laos and Cambodia. Land borders meant that supplies and men could cross easily and Vietnamese fighters could escape out of country in emergencies. It also meant that China could secretly supply force – some 300,000 Chinese nationals gave material support and manned antiaircraft batteries during the war. While Vietnam benefitted, it was a geographic special case that did not replicate readily to other countries.
Further there were regional issues that were not considered. For example Hanoi was established in 1010 and Bangkok was its natural enemy ever since. This coloured the nature of alliances. Since Thailand was the historical enemy of Vietnam they were unlikely to align with Vietnam and communism and in fact they aligned with the Americans.
Unfortunately for both Australia and the US the allies went into Vietnam without an exit strategy and thus found it difficult to extricate themselves once the rationale changed in 1967. By staying in Vietnam they tragically achieved worse casualties occurred after that date.
Further myths and distortions were discussed in question and answer time. 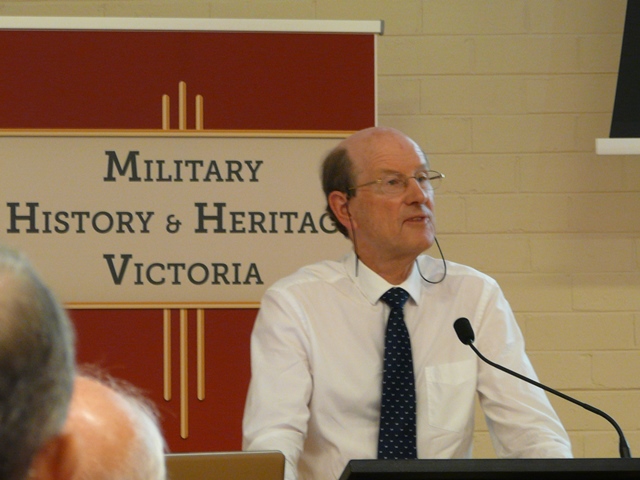 Professor Peter Edwards (AM, DPhil, FAIIA) is a distinguished writer, historian and biographer. He is probably best known as the Official Historian of Australia’s involvement in the 1948-75 South East Asian conflicts (Malaya, Borneo and Vietnam) for which he was the general editor of the nine volume series and author of two of the volumes. His latest book is a summary of the series, Australia and the Vietnam War (2014). Amongst his many other achievements and positions, Peter is a former Trustee of the Shrine of Remembrance. Peter is also a Vice Patron of MHHV.