The Eureka Rebellion holds an interesting place in Victorian history depending on who you talk to, or, who happens to be writing about it. For an event that took less than 15 minutes (the tourist re-enactment takes longer than the real thing), it’s interesting to speculate as to why the rebellion has acquired such iconic status.
Eureka was viewed by Henry Lawson in 1889 as an heroic stand against tyranny which he writes about in fervent and passionate terms:
“But not in vain those diggers died. Their comrades may rejoice,
For o’er the voice of tyranny is heard the people’s voice
It says: ‘Reform your rotten law, the diggers wrongs make right
Or else with them our brothers now, we’ll gather to the fight.”
“Few and taken by surprise,
Oh the mist that hid the skies –
And the steel in the diggers eyes –
Sunday morning in December long ago;
And they grapple and they strike
With the pick handle and the pike
Twenty minutes free Australia at Eureka long ago” 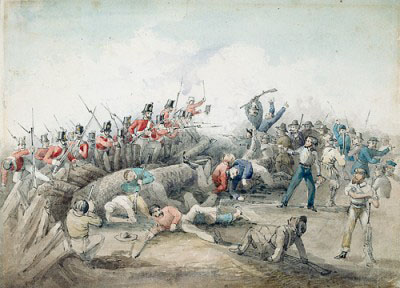 However, exactly how a rebellion against the perceived injustice of having to pay a licence fee to extract gold from crown land at the Ballarat diggings could “free Australia” isn’t quite clear here. Undeniably, there were abuses of power on the goldfields and many today would wholeheartedly agree with the miner’s view that “… it is the inalienable right of every citizen to have a voice in the making of the laws he is called on to obey, that taxation without representation is tyranny” but the fact is, there were no such things as ‘inalienable rights’ for anyone in the Australia of the 1850s and the notion that ‘taxation without representation is tyranny’ was just an opinion at the time, certainly not established political thought.

Others have used the events at Eureka as a personification of the Australian character “The Eureka spirit lives on today for one reason: it encapsulates much of what we hold dear as Australians….. Like Gallipoli, where glory came from defeat, and even like Ned Kelly taking on the police at Glenrowan, Eureka represents something enviable and durable about the Australian character.” (The Age 29th November 2003)

H.V. Evatt, ALP politician and historian, claimed Eureka was “the birthplace of Australian democracy” but Peter Lalor, seen as one of the key leaders of the rebellion, denied any claims to be an advocate for democracy:

“I would ask these gentlemen what they mean by the term ‘democracy’? Do they mean Chartism or Communism or republicanism? If so, I never was, I’m not now, nor do I ever intend to be a democrat.”

Lalor later went on to actually oppose the extension of the franchise to people such as those on the diggings. In addition, by the time of the rebellion, political reform and the expansion of the franchise were already well underway, so we can hardly hold up Eureka as the catalyst for a change of heart by a ‘tyrannical’ colonial administration because no such change of heart occurred after Eureka. Prior to the rebellion, Governor Hotham had already instituted a Royal Commission into miner’s grievances thereby showing an acknowledgement that the goldfield’s administration needed an overhaul and a willingness to find a more effective strategy to deal with the varying interests within the colony. The ‘birthplace of Australian democracy’ argument doesn’t really fly.

The symbol of the rebellion – the Eureka flag – has taken on an identity of its own, quite separate to the rebellion. It has been adopted as a symbol of the trade union movement and is waved at nationalistic occasions and dragged out when the republican debate flares. So how should we view Eureka? Something noble and soul stirring? A revolt against tyranny? Free enterprise against excessive taxation? Labour against the privileged ruling class? A republican movement? A fight for democratic ‘rights’ where there were none? A push for parliamentarian representation? Or something far more basic? Simply vested self-interested objections against a licence fees to extract gold? What do you think?

The military force at Eureka totalled 276 men, 152 from the 1st Battalion, 12th (East Suffolk) Regiment of Foot and the 1st Battalion 40th (2nd Somersetshire) Regiment of Foot, plus police and gun crews, and four artillery pieces. The force was under the command of Captain John Wellesley Thomas of the latter regiment. Commissioned in 1839 he had fought at Kandahar in the first Afghan War of 1841-1842, and had been badly wounded in India in 1843 in the Battle of Maharajpore. He was not about to be trifled with.

Thomas picked 40 soldiers and 26 police to attack the stockade on foot, protected on their flanks by 100 police and soldiers on horseback. The remainder of his force was held in reserve. In the early hours of Sunday 3rd December 1854, when Thomas reasoned that most of the miners would be asleep and some still drunk from the night before, his strike force made a quiet indirect approach through the bush and uphill to Eureka. There was to be no shooting unless his bugler gave the signal. At dawn the soldiers were spotted less than 200 yards from the stockade. Some miners opened fire, the bugle sounded, and the soldiers fired and charged. There was a brief but vicious fight inside the stockade before the miners surrendered, and Thomas ordered a ceasefire.