While elementary under sea craft have been reported for centuries, the first military use considered successful was during the American Civil War. A Union warship was sunk by a Confederate submarine which unfortunately also sank.

The Royal Australian Navy’s (RAN) involvement with submarines is virtually as old as the service. The first of two submarines HMAS AE 1 was laid down on 14 November 1911, just months after formation of the RAN. The E class submarines were built by Vickers Limited of Barrow-in-Furness, England. Details of the submarines are shown in Table1. 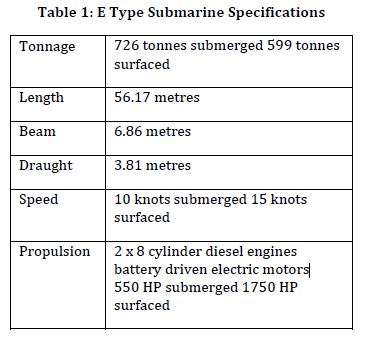 The second submarine HMAS AE 2 was laid down soon after, and dates of construction of the vessels are shown in Table 2.

Both vessels were commissioned at Portsmouth and left England in March 1914, initially in tow, then largely on the surface. After 83 days Australia was reached on 24 May 1914. With the start of the Great War, the submarines joined the Naval forces sent to take German possessions in New Guinea and the Pacific. HMAS AE 1 disappeared, not due to action, on 14 December 1914 in the Duke of York Islands, New Guinea. Some 103 years later the wreck was located by the Dutch survey ship MV Figro Equator.
After the Pacific and Suva, HMAS AE 2 proceeded to Albany via Sydney to assist in escorting a convoy. The convoy arrived at Suez on 28 January 1915 and in February the submarine joined a British squadron in the Aegean Sea. The Dardanelles were entered on 25 April 1915 and 5 days later, the crippled submarine was scuttled. The wreck of HMAS AE 2 was located in June 1998 in 72 metres of water. 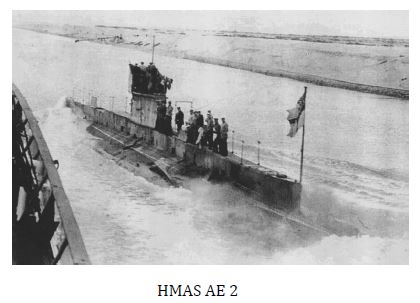 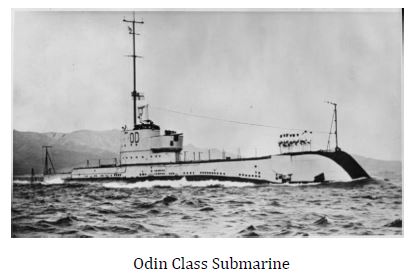 Details of the building and life of HMAS Otway and HMAS Oxley, the two Odin class submarines are shown in Table 3. 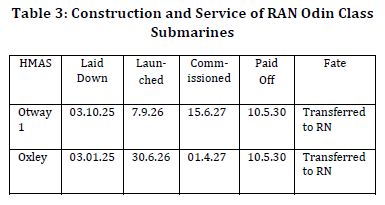 HMAS Platypus at North Sydney was commissioned on 18 August 1967, the day HMAS Oxley arrived in Sydney, as a submarine base on the site of the RAN Torpedo Maintenance Establishment. The base was decommissioned on 14 May 1999 when submarine activities and the Torpedo Workshop were transferred to HMAS Sterling Rockingham in Western Australia.
The 1st Australian Submarine Squadron was formed on 10 January 1969, the day HMAS Oxley arrived in Sydney. Initially 4 Oberon class submarines were ordered but subsequently 2 more vessels were built for the RAN years later.
The RAN submarines were built by Scott’s Shipbuilding and Engineering Company Greenrock, Scotland. However Oberon submarines were built by other shipyards in the British Isles. Details of construction and service of the submarines is shown in Table 4 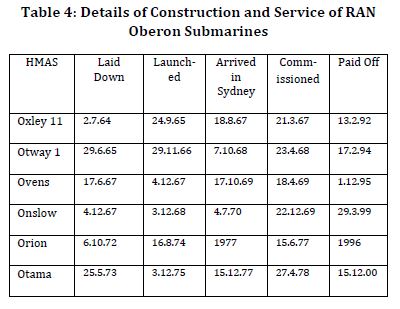 The specification of the Oberon class submarine is shown in Table 5. 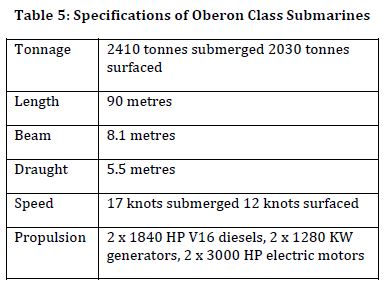 The Oberon submarines are the only example where a complete class or type of vessel of the RAN fleet has been preserved, partially or wholly. The fin of HMAS Oxley 1 is a memorial at HMAS Sterling in Western Australia. The stern section of HMAS Otway 1 is mounted at Holbrook NSW. HMAS Ovens is at the Western Australian Maritime Museum at Fremantle. HMAS Onslow is at the Australian National Maritime Museum at Darling Harbour NSW. The fin of HMAS Orion is at Rockingham Naval Memorial Park in Western Australia. HMAS Otama is off Crab Point, Westernport Bay Victoria pending funding. 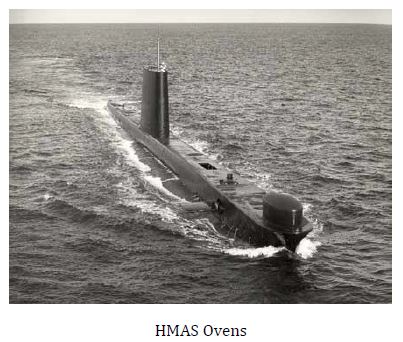 The Oberon class submarines were replaced by the Australian built Collins class submarines. These diesel electric submarines were named after Vice Admiral Sir John A. Collins, a former Chief of Naval Staff and were built by. The Australian Submarine Corporation, a Government initiative located in South Australia. The vessels are an enlarged version of the Swedish firm Kockum Vastergotland class and details of construction and service of the Collins submarines re shown in Table 6. 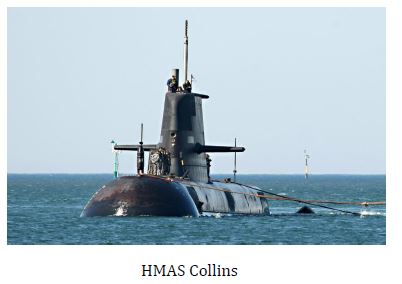 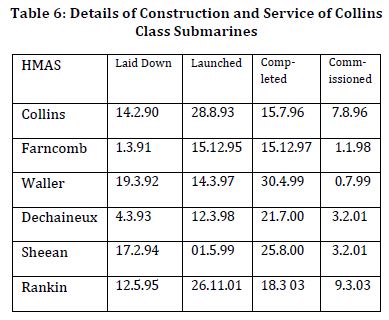 All of submarines were named after distinguished former Naval Officers. The first submarine was named HMAS Collins, the next named HMAS Farncomb after Rear Admiral H. Farncomb, a Second World War commander and the first graduate of the RAN college to achieve Flag Rank. HMAS Waller was named after Captain H. Waller, commander of the cruiser HMAS Perth when it was torpedoed in the Pacific. HMAS Dechaineux was named after Captain E. Dechaineux, who was killed in an attack on HMAS Australia which he commanded. HMAS Sheean was named after Ordinary Seaman Edward Sheean who acted heroically during the sinking of HMAS Armidale. HMAS Rankin was named after Lieutenant Commander Robert Rankin, Captain of HMAS Yarra who was killed during the sinking of the vessel. 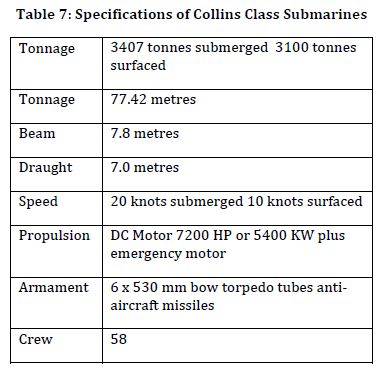 Females serve in the Australian Submarine Service, the first trainees were accepted in June 1998.

Dr John Haken is a founding member and Fellow of the Military History Society of NSW.

This article was published with permission from RECONNAISSANCE, The Newsletter of the Military History Society of NSW.