The important news for the library is the appearance of our catalogue on-line. As previously advised to our members, the entire catalogue is now searchable at:
www.thecollectingbug.com/rusivictoria/
The masthead of the front page on the website looks like this:

The red arrow has been added in this report to emphasise which search box to use. There is also a choice to browse by folder: 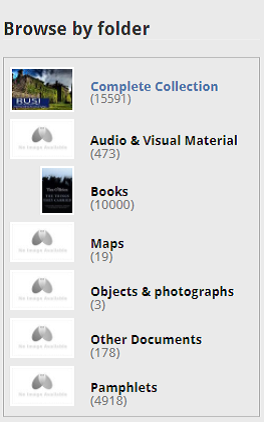 Note that the counter is incorrect due to a software error in the host software, all 23,700 plus items are uploaded to the site. Normal Boolean search conventions apply e.g. if you are searching for items relating to U Boats, enclose the search term in quotes “U Boats”. This will tightly focus the search rather than finding all instances of U and Boats.

The catalogue is now harvested by the National Library of Australia and also appears on the NLA search site TROVE. Thanks are due to the host website “thecollectingbug” team for their patience and skill in getting our catalogue into the correct format for the web and getting us up to speed to maintain it.

The site is fully operational, but the aesthetics will be improved as time permits. We also intend to display parts of the collection under the “Exhibition” tab from time to time e.g. silk maps.

We have just finished cataloguing an important collection amounting to 1,000 books donated from the estate of Col. Jim Wood, many of which were previously owned by Warren Perry and include numerous important 19th century books. In addition, we have just received a large donation of books covering the Vietnam war, more about which in our next report.

For those members in need of bedtime reading we have also received a complete transcript of the Tokyo War Criminal Trials, in three crates!
Written for RUSIV by Brian Surtees, Honorary Librarian