Soldier Boys, The Militarisation of Australian and New Zealand Schools for World War I by Maxwell N. Waugh – Book Review

Soldier Boys examines the development of the military in Australasia from the first volunteer militia units in 1860, voluntary cadet units prior to 1909 (1910 in New Zealand) through to the end of compulsory cadet training in 1929.
Waugh compares the youth training that existed in Europe in the mid-19th century and how the emerging cadet units in the colonies here were modelled on them. The units of volunteer cadets in each state are compared prior to Federation, and as our Commonwealth emerged, thoughts had turned to the need for conscription back in Europe as well as here in Australia and New Zealand.

With defence now a Federal responsibility, the agitation for conscription grew, but was not favored by politicians. The 1903 Defence Act established the Australian Commonwealth Cadet Corps with the Defence Department having control of all cadet units. The 1909 Defence Act of Australia saw the introduction of compulsory cadet training for Junior Cadets (12 to 14 years), Senior Cadets (14 to 18 years) in both state and non-state schools and compulsory service in the militia (Citizen Military Forces) for 18 to 25 year olds. The cadet training was to be conducted by members of the school teaching staff. The Act contained provision for non-compliant youths to be prosecuted.

New Zealand’s 1909/10 Defence Acts had similar compulsory cadet training requirements with a General Training Section (for 18 to 21 year-old) and Reserves (for 21 to 30 year-olds) in the Territorials. The various community elements that supported or opposed compulsory military training are discussed in reasonable detail for both Australia and New Zealand.

The outbreak of war saw both countries with a core of trained young men who readily volunteered for active service, and at the same time few attempting to avoid their training responsibilities. There was no conscription in Australasia for the duration of World War I despite two very close referendums in Australia in 1916 and 1917.

During the two decades running up to 1914, well-oiled state propaganda campaigns made known to school children that it was the manly and patriotic thing to serve one’s country. Unfortunately accurate figures of the origins of who volunteered for Boer War service is not known, but at least 60% were thought to have had some voluntary cadet service prior to enlistment. The same applies to those who served in World War I, particularly as there were many under-age enlistments.

State Education Departments’ publications such as the Victorian School Paper made sure pupils of all ages knew the history and anniversary of all patriotic occasions, and ‘oaths of allegiance’ expected to be known by heart. Teachers played their part in training and indoctrination of cadets, but were also expected to be among the first to volunteer when war was declared. The enlistments and casualties among cadets and teachers are comprehensively explored, as is those (including German youths) who falsified their ages to enlist.

Soldier Boys is well-written, easy to read and is generously illustrated with timely photographs and facsimiles. The comprehensive table of contents and index allow easy location of specific facts/events. Thorough research has been done as is evidenced by eighteen pages of endnotes and a large bibliography.

On the down side there is evidence of poor editing and proof reading. One caption is labelled ‘Puteney’ Grammar instead of ‘Pulteney’, and . . . grades 5 and 6 were expected to memorise as one of their normal ‘wrote learning’ exercises [author’s quotation marks]. In May 1916 (the Empire Day edition) Grade 3 and 4 School Paper children were alerted to the bravery of Lord Nelson fighting Napoleon’s navy at Waterloo . . .!

Soldier Boys is a very worthwhile acquisition for any library looking to complete its World War I collection.

The Royal United Services Institute of Victoria Library wishes to thank the publisher for providing a copy for review. 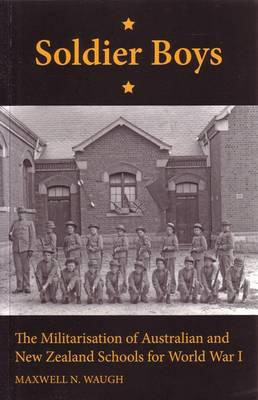