On 11th May 2016 Kate Luciano was MHHV’s monthly Military History Speaker. In it she summarised the post WW1 Victorian Soldier Settlement Scheme helped settle some 11,639 out of the 78,000 returned soldiers on farming land across the state through government leases between 1918 and 1934.
Through original records, as well as first-hand videos and photographs, Kate talked about the establishment of the Soldier Settlement Scheme in Victoria, and the harsh realities of life on a soldier settlement farm. She revealed some of the success stories, but in reality these success stories were relatively rare while failure was the norm. 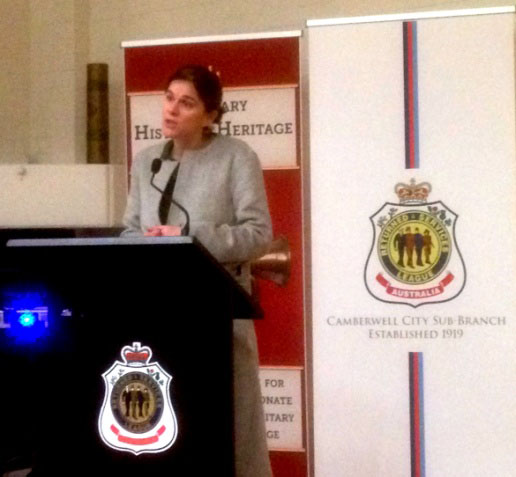 The scheme was set up with the worthy intention of giving returning veterans an occupation in an economy that had adjusted to their absence and couldn’t absorb them back. While it got them out of sight for a while, the poor design and implementation of the scheme caused many veterans and their families years of misery.

Lack of skills, unworkable lots, an excessive prevalence of war injuries both visible and invisible and tumbling commodity prices meant years of hard scrabble. Women and children toiled from dawn to dusk as their labour partially substituted for lack of working capital for machinery and labour. Housing and sanitation was poor if it existed at all. Suicide and divorce rates rocketed while the children suffered low education standards.

In the end thousands walked off the land with nothing.

The 1925 Royal Commission confirmed most of these problems. These were: the soldier settlers were too inexperienced and/or unsuitable; they had too little capital; the blocks of land were too small to be economically sustainable; all this was compounded by a catastrophic drop in commodity prices.

Luckily the findings of the Royal Commission led to a much better soldier settlement scheme being implemented following World War II.

Kate Luciano graduated from a Masters of Public History from the University of Melbourne in 2005 and, since then, has worked consistently in the heritage sector. For more than 5 years, she has been the Curator for the Public Record Office Victoria, which has its exhibition space at the historic Old Treasury Building in Melbourne. Her area of specialty is Australian social history. MHHV’s monthly Military History Speaker Program is convened by Dr Andrew Kilsby.