A recent ABC radio interview with Keith Quinton, the author of a recently published book ‘Stop the Pfalz – 1914’, and the chairperson of the Victorian Anzac Centenary Committee, Ted Baillieu, has generated considerable interest in the opening hours of WW1. Three Fort Queenscliff Museum volunteer researchers, Keith Quinton, Siranne Hose, and Rafe Slaney, have spent much of the last two years researching the sequence of events involving the German merchant ship S.S. Pfalz and its attempt to escape Port Phillip on August 5th 1914. As the centenary of WW1 approached the trio sifted military and museum archives, previously unseen communications and letters, official histories, other book references, and dozens of newspaper files, in an effort to re-examine a story that over decades has become riddled with misinformation, conjecture and local myth. 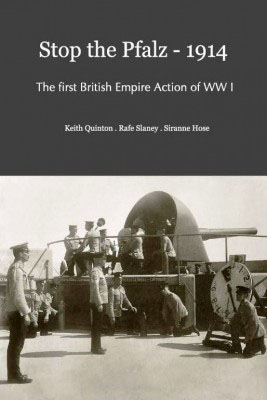 The result of their effort is a fascinating book examining in detail the passage of the German ship from Victoria Dock to Port Phillip Heads as it desperately tried to escape before Britain’s official declaration of war was declared. They also forensically examine the actions taken by the Royal Australian Garrison Artillery in an equally desperate effort to prevent the ship exiting the Heads. A century of conjecture has passed as various participants told widely conflicting stories, and newspapers simply got it wrong in the race to gain ‘breaking news’ headlines. Even the famous First shot of WW1 photograph produced by the Australian War Memorial immediately after the Armistice has its own strange tale to tell. Over the decades historians have entered the fray and most simply added to the confusion. Some Queenscliff citizens, with their love of rumour and tall tales, declared that the first shot was fired from a gun at Fort Queenscliff; others told tales that included ‘rabbit hole diggers’ finding the shell in a paddock on the Bellarine Peninsula, or, that it sat on a shelf in the sergeant’s mess at Fort Queenscliff, even that it had been washed into rock pools and taken home by campers in the 1960’s.

By an analysis of military documents, specified gun procedures and eye witness statements, both on ship and ashore, the researchers have narrowed the likely location of the first shot event to an 800-metre stretch in South Channel, bound on the east by a line running between Shortland’s Bluff at Queenscliff, and Observatory Point on the Nepean shore. On the west, F1 gun battery at Fort Nepean and Pope’s Eye Annulus form an outer boundary. The possibility of utilizing their research to recover the ‘heave to’ shell fired from Fort Nepean has been suggested by several Port Phillip dive groups. Given that a century has passed and that the sea floor is daily swept by strong currents and the tidal ebb and flow, finding the shell may be little more than an intriguing possibility; but, what a possibility.

The book was officially launched at a Friends of Fort Queenscliff Christmas Function on Friday, 13th December and copies may be purchased by contacting Fort Queenscliff Museum or online at www.fortqueenscliff.com.au.

Wider distribution is planned during 2014, the Centenary year of WW1.