In August 1966, 25 young Australian soldiers landed at Jackson’s Strip airport Port Moresby, in the then Territory of Papua and New Guinea,[1] with only a hazy idea of why they were there. 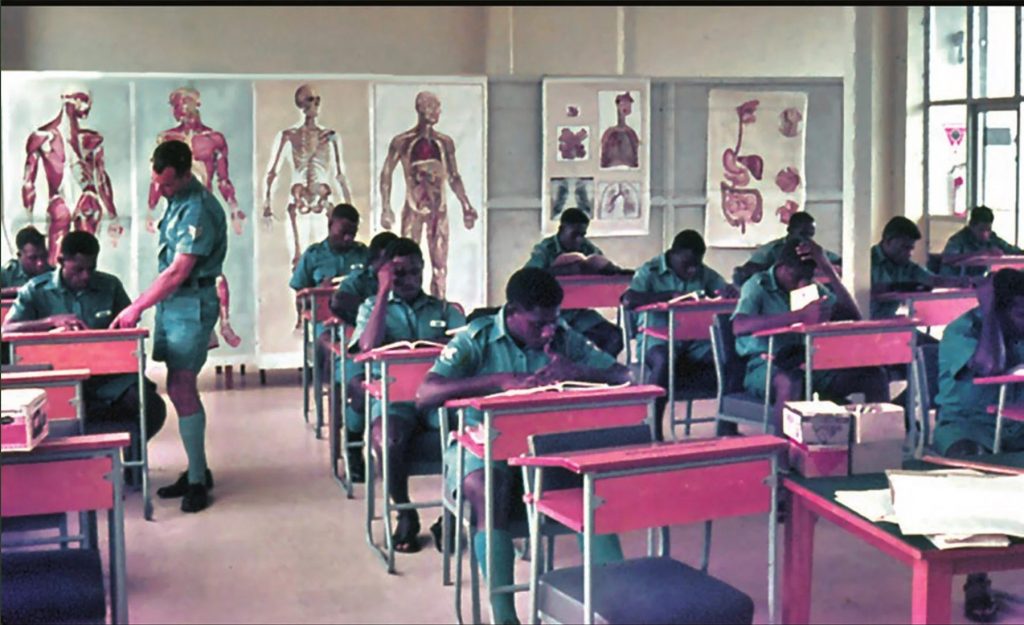 These young men were all school teachers, and they’d been conscripted into the Army for two years. Although they didn’t know it at the time, this group of 25 was the vanguard of a taskforce of some 300 conscripted teachers sent to TPNG between 1966 and 1972.

Under the National Service scheme introduced by the Menzies Government in 1965, all 20-year-old males had to register for National Service, commonly known as ‘Nasho’. Between 1965 and 1972 almost 64,000 of these young men were randomly selected in a subsequent birthday ballot to serve in the Australian Army.

About a quarter of these were sent to fight alongside regular soldiers in Vietnam, where Australia and other nations were supporting the US against feared communist expansion in south-east Asia. Some 200 Nashos died there.

While the focus was on Vietnam, senior officers in the Army seized on the opportunity of National Service to meet a need they had earlier identified elsewhere: improving the educational levels of the 2500 indigenous soldiers in TPNG, who at that time were part of the Australian Army.

In particular, Brigadier Ian Hunter, Head of PNG Command, and Brigadier Maurice ‘Bunny’ Austin, Deputy Adjutant-General in Canberra, regarded such a development as vital for the growth and stability of a country they saw as heading towards self-government and independence sooner rather than later.

These two visionaries realised that National Service was bringing substantial numbers of trained teachers into the Army, and they decided to make use of that expertise in TPNG.

I know about this venture because I was one of those 300 conscripted teachers, commonly known as Chalkies. After recruit training at Singleton in NSW and a posting in Brisbane, I was sent to Taurama Barracks near Port Moresby for twelve months from late 1969.

By that time the Army was posting about 40 teachers a year to the Territory; between 1966 and 1973 tours of duty ranged from 12 to 18 months. The early cohorts of Chalkies were plucked from other Corps such as Ordnance and Artillery, and reposted virtually overnight to the Royal Australian Army Educational Corps. 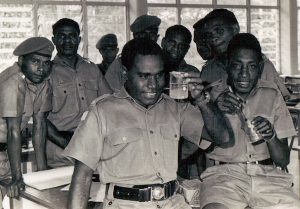 Later, incoming teachers were invited during the recruit training phase to apply for selection in Education, rather than being snatched seemingly indiscriminately from other corps. In all, only a small proportion of Nasho teachers ended up in Education, however.

Some of us picked for the Educational Corps had taught in primary or secondary schools for a year prior to Nasho; others came direct from teachers college or university. The criteria for selection weren’t clear, although the ability to mix with ‘non-whites’ and/or to play sport appeared to be important.

Education has a long history in the Australian Army and there was already a handful of full-time officers serving in TPNG. The newly posted Nasho teachers overnight were promoted from private to sergeant, a move understandably not always welcomed by regular NCOs who had taken years to rise through the ranks.

On arrival into the steamy heat of Moresby, each annual Chalkie cohort was divided among the five Army bases in the Territory: HQ at Murray Barracks, 1st Pacific Islands Regiment (1 PIR) at nearby Taurama Barracks, the Recruit Training Depot at Goldie River (30 km from Moresby), Igam Barracks at Lae on the North Coast, and 2 PIR at Moem Barracks near Wewak, on the north-west coast. 2PIR also serviced an outpost at Vanimo on the border with Indonesian West Irian (now West Papua).

When we reached our new postings, we quickly found ourselves in the classroom – teaching English, Maths, Social Studies and Science, creating pathways to educational certificates. And we discussed the role of an army in a democracy. Classes were fitted around the troops’ military training commitments.

Most Chalkies were single and so lived and ate in the Sergeants’ Mess. Early arrivals were surprised to find themselves housed in tents, and teaching in makeshift classrooms, but later Education sergeants were fortunate to live and work in modern purpose-built facilities. A few, like me, were married and usually fortunate to be allocated a house on the base.

In hindsight, the Army had high expectations of the 300 or so Nasho Chalkies sent to PNG over those eight years. Few of us were aware at the time of the potential contribution we might be making to the future development of an emerging Pacific nation.

Individually, however, we readily accepted the responsibility and unexpected professional autonomy, often developing our own resources. We were glad to be able to make use of our teacher training, although this was within a pervasive military context that some conscripted Chalkies understandably found constraining and frustrating.

As sergeants we also had military duties on the bases where we served; some Chalkies accompanied the troops on civic action patrols around the country, and also joined or coached their sporting teams, and showed movies in the Mess. After hours we made our own fun, some buying cars or motor-bikes and audio equipment, or taking advantage of cross-country charter flights.

After completing their two years National Service, not all Chalkies stayed in education. Some found their time in PNG life-changing. In my own case, the experience of teaching adults in PNG changed my career trajectory – initially a return to that country as a civilian college lecturer (where I saw the birth of an independent PNG), followed by postgrad studies leading to academic appointments at several Australian universities; and satisfying opportunities to continue to use and share my skills into older age.

The overall significance of our potential contribution to PNG dawned slowly. It was several decades later, early in the 21st century, that ex-Chalkie Ian Ogston began collecting stories from former Nashos who’d been posted there. Later Terry Edwinsmith and others initiated meetings that led to a series of reunions around the country and the establishment of a Chalkies website by Frank Cordingley which continues today: www.nashospng.com.

Those initiatives gave some of us an opportunity to rediscover the time we’d spent in the Army in PNG as fresh-faced 20-somethings. It was a chance to reflect on its possible significance for that nation’s development, as well as its impact on our own personal and professional lives.

More recently, in early 2022 the State Library of Queensland acknowledged the role the Chalkies played in PNG through a series of video interviews which will become part of the library’s military history collection.

Dr Darryl Dymock was a National Serviceman 1969-70 and was posted to the Royal Australian Army Educational Corps as a ‘Chalkie’. His book, The Chalkies: Educating an army for independence, tells the story of the 300 conscripted teachers posted to the then Territory of Papua and New Guinea between 1966 and 1973.

[1] In this article, ‘PNG’ is sometimes used for ease of reference, but officially TPNG became PNG in 1971. 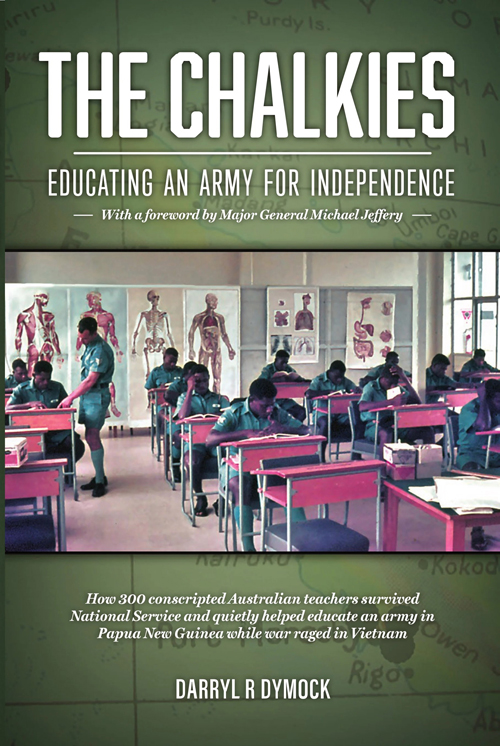