Research staff at the Australian War Memorial recently found a file marked ‘8 Div. Papers’. Instead of being reports on the Malayan campaign or official documents there were folders containing 51 mostly handwritten essays written by Changi prisoners of war. They had resulted from literary competitions within the camp and included stories of all aspects of camp life. It had been planned to publish them in a book after the war, similar to many of the service annuals that had been deservedly popular. For a variety of reasons, the plan to publish lapsed and the volume did not appear. Here it is then, just 70 years late!

There appear to be many misconceptions about Changi. As well as Australians, Britons, Americans, Dutch, New Zealanders, Indian, Malayan and Chinese soldiers were imprisoned, as were many civilians. Australians were not in the majority. The prisoners of war in Singapore were not the subject of the worst atrocity committed by the Japanese there – it is estimated that about 25 000 local Chinese men were executed in what Singaporeans call the Sook Ching massacres. While Changi was not a holiday camp – food was always exceptionally scarce, military discipline applied and mail to or from home almost non-existent – conditions were relatively easy compared to the horrors of the Burma Thai railway or other work camps. Indeed, a significant gulf existed between those fortunate enough to remain at Changi and those who survived the death railway.

During the Malaya-Singapore campaign as a whole, AIF Malaya suffered 73 percent of Allied deaths in battle, even though they comprised only 13 percent of the Allied forces. 14,972 Australians were taken prisoner of war. They and their families entered into a period of great uncertainty. Were they alive and well, dead or wounded? How long would they be imprisoned? The severe Japanese restriction of mail and information left thousands of Australians in a state of constant concern.

The Changi Book reveals the full scale of activities in the prison, emphasizing the resourcefulness of its inmates. There are chapters on the hidden radios, the library and its bookbinding ancillary, POW politics, vitamin production, false teeth manufacturing, chaplains, rubber manufacture, entertainment, broom making, forestry, skin diseases and many others.

This volume is particularly enhanced by its illustrations, many of which have not been previously published. They include many remarkable photographs covertly taken by the POWs. They are supplemented with superb drawings by the Official War Artist, Murray Griffin, many of which were to have been included in the planned Annual.

As it happens the RUSI Victoria Library has another, perhaps unique, version of the Changi Book. It is an extensive typescript with all the chapters reproduced in the reviewed book and several others that have been omitted from it. We also have a related item, a copy of an unpublished journal kept by a POW in Changi and afterwards on the Burma railway. Both these items are important references for scholars.

The Royal United Services Institute of Victoria Library wishes to thank the publisher for providing a copy for review.
Reviewed by Mike O’Brien, February 2016, for RUSI Victoria. 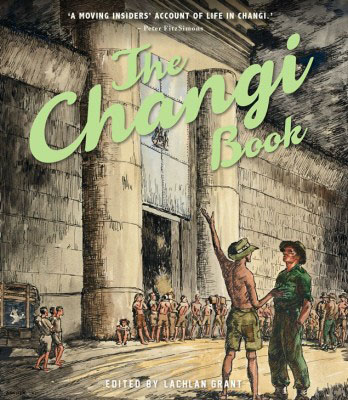