The first comprehensive book on Military Law for nearly a century

Military Law in Australia covers contemporary legal practice in a military context. It is written by a stable of experts drawn from the profession, including a judicial officer, barristers, legal practitioners within Defence, legal academics, and public lawyers in government and the private sector. This is the first comprehensive book on military law in Australia for nearly a century, filling a hitherto neglected area of jurisprudence.

The chapters cover all areas of law which have a special impact on the Australian Defence Force (ADF). These include the history of Australia’s military operations, the development of the military justice system, particularly its constitutional foundation, and the key operational areas involving criminal, administrative, and international law including cyber law and outer space.

Of particular relevance to serving members are those aspects of the book which deal with personnel matters for ADF members and their families, such as housing, health and welfare, superannuation, compensation and transition from the ADF, as well as defence awards, funeral assistance, and the rules concerning members’ ability to stand for Parliament.

For too long, the rules concerning the military in Australia have not readily been accessible, even by Commanders and practitioners. This work fills that gap in Australia’s knowledge of the operations of a long-standing and increasingly important arm of their government. 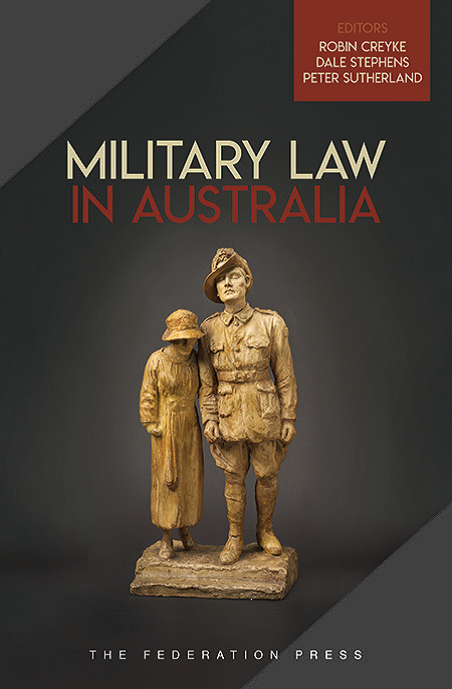 Peter Sutherland BA, LLB (Qld) is Convenor of the Legal Aid Clinic, a clinical legal education program for the ANU School of Legal Practice based at Legal Aid ACT and is Director of SoftLaw Community Projects in Canberra.

Damian Copeland LLB (Hons)(QUT), LLM (Merit)(ANU) is an Army legal advisor in the Australian Defence Force with the rank of Lieutenant Colonel.

Emily Crawford BA(Hons), LLB, PhD is an Associate Professor at the University of Sydney Law School, where she teaches and researches in international law, international humanitarian law and international criminal law.

David Letts AM CSM BComm, LLM holds appointments as Director of the Military Law Program, and Director of the Centre for Military and Security Law, at the Australian National University College of Law.

Christopher Minus is a Juris Doctor student currently studying at the University of Western Australia.

Rob McLaughlin is Professor of Military and Security Law at UNSW Canberra, Director of UNSW Canberra: Conflict + Society, and an Honorary Professor at the ANU College of Law.

Bruce ‘Ossie’ Oswald CSC, PhD is a Professor at Melbourne Law School and Director of the Asia Pacific Centre for Military Law.

James Stellios is a Professor at the ANU Law School.

John Tarrant is Professor of Law at the University of Western Australia.

Richard Tracey AM RFD QC, LLB(Hons), LLM (Mel), LLM (Illinois) was appointed as a Commissioner of the Royal Commission into Aged Care Quality which is required to provide a final report by 30 April 2020.

Sophia White is a Commander in the Royal Australian Navy who served as a legal officer for 16 years full time, transferring to the Active Reserves in 2018.

It would be a valuable addition to your resources as it covers all areas of law which have a special impact on the Australian Defence Force (ADF), including key operational areas involving criminal, administrative, and international law.