On 26 March 1913, HMAS Melbourne, Australia’s first light armoured, ‘Chatham Class’, cruiser, commissioned at Birkenhead on 18 January 1913, lay alongside Port Melbourne’s Town Pier, on completion of her maiden voyage. On 4 October 1913, Melbourne, along with Australia, Sydney, and the other modern and capable standard bearers of the Royal Australian Navy (RAN), entered Sydney Harbour as part of the inaugural RAN Fleet Review.

Less than a year later the nation was at war and Melbourne deployed as part of the joint force to seize German territories to Australia’s north and as the RAN’s formidable sword and shield against the powerful German East Asiatic Naval Squadron. On 8 November 1914 Melbourne assumed command of the Australian-New Zealand 36 ship convoy and her sister ship Sydney and the Japanese battle cruiser Ibuki on the day before the historic Sydney-Emden engagement off the Keeling Islands Group in the Indian Ocean.

This belated and welcome book is about much more than a pioneer warship, it is about people – the crews who sailed in her from her commissioning in 1913 until she was finally ‘paid off’ in 1928.

An engaging and compelling feature of the narrative is the effective use of a range of material to describe the daily lives and personal circumstances of the many individuals who comprised the crews of Melbourne, as she moves from times of peace to war to peace, across the seas of contrast, from the extremes of weather and sea states, through the vagaries and complexities of challenging operational conditions, to the rare opportunities of life ashore and the occasional ‘pomp and circumstance’.

Officers and men come alive on the page, whether in the course of grinding routine or exceptional duty, at times of achievement, or during the frank accounts of crime and punishment, of desertion, to the previously unsung heroes, exemplars, and ‘everyman’, to the stimuli of reinforcement and relief, to the never ending cycle of duty, refurbishment and training and response to new technology such as the aircraft, the submarine and the mine.

The reader is thoughtfully introduced by way of continuing emphasis through-out the book to the realities for the individual of naval life and service, to the ‘wear and tear’ of constant alertness to the proximity of death in many guises, to matters of leadership at every level, to discipline, to death or injury by enemy action, or accident, or illness, or sea conditions, to the belated ‘war deaths’, and the comparisons and contrasts between peace and war service. In all these diverse circumstances the ship and the crew are one, totally dependent for their survival and health on the actions and capacities of each other sealed within a cocoon of mutual interdependence.

Yet as the authors vividly reveal, chance is a fickle companion. Whether as evident in the decision by the Captain of the Melbourne to protect the Australian/New Zealand convoy or pass the honour and glory to Sydney, or the 40 ft. near miss by a German torpedo in the English Channel en route to Plymouth there to have the first leave since the war began, to the other near misses as seen in the fate of other ships, or a member of the RN’s ‘Suicide Squadron’ on convoy duty in the North Sea.

The Forgotten Cruiser is an Aladdin’s Cave, filled as it is with enchanting images of colourful and stimulating graphics of diverse intent; a copy of the SECRET Sailing Orders of 2 September 1914, a reminder that boys served on Melbourne with a copy of a coloured diagram illustrating the correct layout of ‘1st and 2nd Class Boys Kit’, a copy of the SOS that led to the extraordinary rescue, under the most extreme of conditions, of the 18 crew and passengers of the sinking schooner Helen B Sterling, the careful placement of long hidden records and photographs of men, ship and events, the detailed nominal roll of the original commissioning crew in 1913, and finally the comprehensive and enlightening bibliography, footnoting and informative captions.

Congratulations to Andrew Kilsby and Greg Swinden for bringing this treasure chest onto public display and on the quality of the detailed research and technical command of their subject. Alistair MacLean, as author of HMS Ulysses, would say ‘welcome aboard’. 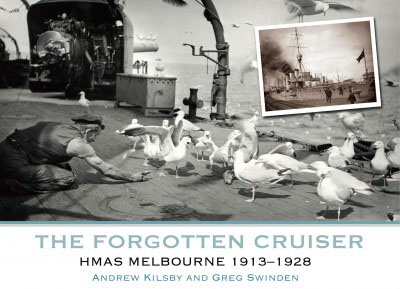