The Keenan Prayer Book – From Flanders to Broken Hill

Edward Keenan, born in Workington, Cumberland in 1884 and an iron ore miner by trade, was one of a family of nine sons and four daughters, seven sons of which at one point in 1899 were all serving in the British Army. Four of those subsequently saw service in the Boer War and three in World War One. Surviving the Great War, Edward emigrated to Australia with his family and died in Broken Hill in NSW in 1933. 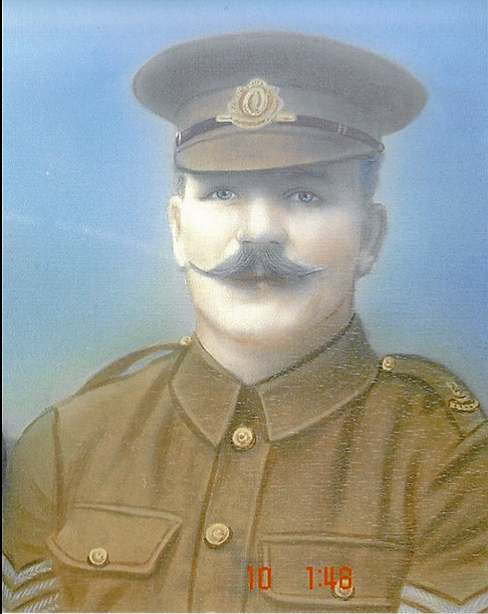 This article describes the noteworthy record of service of the Keenan family from the Victorian era through to 1920, when Edward Keenan was discharged for the third and last time. It concludes with the remarkable story of Edward Keenan’s Prayer Book, lost on the battlefield in 1915 and recovered to its family of origin in another continent 54 years later.

In 1857 Irish born Felix Keenan enlisted in the 2nd Dragoon Guards in Liverpool. Twenty-two years old, he was initially posted to the Dublin Depot and subsequently to Newbridge, Edinburgh, Birmingham, and Aldershot. When discharged in 1874 after 16 years of service, Felix Keenan settled with his wife Hannah in Workington where she had been born. Their family contained a number of children, born during and after Army service including Edward Keenan of this story.

The details of the service of the sons in the Keenan family are not all complete, due to the loss of records destroyed during World War Two, but what is known prior to WWI is encapsulated below:

In June 1900, Hannah Keenan received a letter from Queen Victoria’s Equerry in Waiting, Arthur Davidson, along with a cheque for £7. It read:

I am commanded to inform you that the Queen has heard with great pleasure that you have seven sons all serving in Her Majesty’s Army at the present time. I am commanded to forward to you the enclosed cheque as a present from the Queen, who is gratified to learn of so many members on one family being in her service. Her Majesty trusts that your four sons now in South Africa will all return to you in safety, and it is hoped that your son who was wounded at Spion Kop is now convalescent.

Six of the seven sons in service were John, James, Felix, Francis, Edward and Peter. The seventh son in service is unknown. The four sons serving in South Africa included James, Felix and Francis. As the 1st Battalion of the Border Regiment was present at the battle of Spion Kop in January 1900 , it was probably Francis Keenan who was referred to in the letter from Queen Victoria. The fourth is unknown from records, but Edward Keenan’s headstone after his death recorded ‘A veteran of the Boer War’.

James, Felix and Peter Keenan went on to World War One service, as did Edward:

1. James Keenan – enlisted in August 1914 with the 6th (Service) Battalion and with operations Gallipoli (Cape Helles) from July 1915, to UK June 1916 and to Reserve, discharged January 1919.
2. Felix Keenan – appointed officer in December 1914, served in UK until deployed to Salonika, Greece in January 1917. He served in a variety of different support roles with Labour Corps and Prisoner-of-War camps before returning to the UK in late 1919 and retirement in 1921
3. Peter Keenan – saw active service in France and Flanders from 25th January 1915 with the Border Regiment, most probably with the 2nd Battalion or 1/5th (Cumberland) Battalion of the Border Regiment. He was wounded in action in 1917 and discharged on 22nd July 1917.

A fourth brother, Edward, also served in World War One. In 1911he had married Jane Reid in Cleator, a small village a few kilometres from Workington. According to a 1969 news article in Australia, a Catholic Prayer Book, ‘Garden of my Soul’ was presented to the bride by the parish priest. Later, when it was clear that Edward was destined for the Front, on 25th April 1915 the priest inscribed ‘God Bless You & Protect You’. A few days later, Keenan’s wife Jane, also inscribed ‘From my Dearest wife to her loving husband Ted Keenan 29.4.15’. Leaving Jane and two young sons behind at home Edward Keenan entrained for Flanders – he later wrote in pencil in the back of the Prayer Book ‘Went into Trenches Saturday night 15.5.15’ and ‘Relieved Tuesday morning 18.5.15 left behind bike in Dugout until evening’.

Edward Keenan went on to serve with the Border Regiment throughout the war on the Western Front. He was discharged in February 1919 but re-enlisted three days later and went on to serve until November 1920. There is no record of Edward Keenan being wounded during the war, but there is a family story passed down that he was wounded by gas in 1915. At sometime in 1915 the Prayer Book was left behind in a trench or dugout with other belongings, perhaps in some rush to get away or because Keenan had been medically evacuated in haste. Judging by the absence of further entries in the Prayer Book, it is possible that this might have occurred soon after Edward arrived in the trenches, but as it is not clear as to which battalion he was serving with at the time, it is difficult to clarify the battalion actions that year.

Following the war, Edward Keenan decided to emigrate to Australia. As an iron ore miner, it seemed that Broken Hill in New South Wales, a mining town just across from the South Australian border, attracted him. He and his brother James, a ‘motor engineer’, arrived in Sydney on the Sophocles in November 1924. His wife Jane arrived in 1925 via Adelaide on the Ballarat, some 18 months later, with five sons – two more were born in Australia. Edward’s brother Joseph Keenan also emigrated to Australia with his family in 1928, joining the other Keenans at Broken Hill, where all three brothers worked in the mines. They joined in the civic and family life of their new town in their adopted country. For example, the brothers were instrumental in starting up soccer association clubs in 1928 – Edward convened the Rovers Club.

Edward Keenan died in Broken Hill in 1933, aged just 51. In June 1969 a remarkable letter arrived in the home of a Keenan descendant in Broken Hill. It came from England, unheralded, from a Mrs Frances Bull of Rochester in Kent. Enclosed with the letter was an old Prayer Book – the very same prayer book presented to Jane Keenan in 1911 and carried by Edward Keenan to the Western Front. The letter said,

I am writing to you due to the marvellous efforts of the Salvation Army to trace a family called “Keenan” & owing to them contacting the Editor of [Catholic newspaper] “The Universe”. They have sent your address to me saying that you know the family. For years now I have treasured a small Catholic Prayer Book (Garden of my Soul) & tried to trace the family as we are O.A.P. [Old Age Pensioners] ourselves now it was my last try, & succeeded…

The letter explained that the enclosed Prayer Book had been handed to her husband, a police constable on duty, by a German visitor who had come to London in 1954 to see the first Britain-Germany soccer match since World War Two. The German had in turn obtained the book from his own brother, who had picked up the book ‘on the grim battlefield of Flanders’, but had himself been killed there. The brother asked Constable Bull if the family of the book could be traced so that the book could be returned to them. Mrs Bull and her husband had been trying to do so ever since, ‘hoping to eventually find either sons Eddie or James Keenan as they would be in their fifties or if God willing the Soldier himself’ and had finally managed to do so with the help of the Salvation Army.

The military service of Edward and his brothers served as a small footnote of interest to Queen Victoria in 1900 of which they would have been very proud. The return of the ‘Garden of my Soul’, re-united in a serendipitous turn of events with at least the descendants of its owner, 54 years after it had been lost on the battlefield, is something else. It remains a treasured possession of the Keenan family in Broken Hill, a poignant and tangible link not only to Edward and Jane Keenan but to Edward’s service in World War One.