The extent of Australia’s casualties in the First World War is, I consider, grossly underestimated. The Australian War Memorial accurately states that for Australia, that war remains the costliest conflict in terms of deaths and casualties. From a population of fewer than five million, 416,809 men enlisted, of whom more than 60,000 were killed and 156,000 wounded, gassed, or taken prisoner. War survivors could not survive the peace. Gassed men choked to death, cot cases died in misery, men with psychoses blew their brains out. The First World War tore the nation apart and left a legacy of trauma. The casualties of the war far exceeded the figures above. Few men escaped war’s trauma. Many had their remaining lives blighted by their military experience. To this number must be added the families and loved ones affected by the war, many in a lasting way. It is fair to estimate that over one million Australians were ‘casualties’ of the Great War. 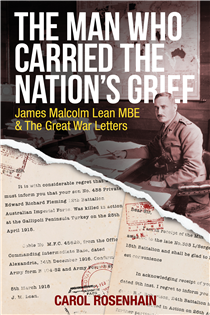 Army Records is an essential and an unglamorous function. It fell to James Lean to organise this function from Army Headquarters in Melbourne. His legacy remains with us today in the form of the digitised files of the First AIF readily accessible at the web site of the National Archives of Australia (NAA). These records show an over-arching method and organisation. They also show the confusion of war and its casualties. Lean was not only methodical but also sympathetic and patient: he saw not just the killed and maimed of the battlefield but he also ensured that relatives and loved ones knew what had happened to the best of his ability and that of his burgeoning staff.

NAA files show his work in agonizing detail. There were about 60,000 killed in action in the First AIF and one in six had graves that were unknown. Ten thousand families yearned to know the details of their soldier’s death – or imprisonment – and yet there were no such details forthcoming from the front.

Lean commenced and continued chains of correspondence with families unable to be convinced of the unknown fate of their loved ones. He did so directly and simply and with consummate patience. And he did so again and again.

Lean yearned for active service, denied to him because of his irreplaceable competence. He was even denied the medals of war service, though his service was indefatigable.

Carol Rosenhain has done us a singular service by exposing the enduring worth of a soldier bureaucrat. She tells a heart-rending story. She can be forgiven for being Lean-centric: perhaps others can take up the story of his successors in the Second World War and after.