Lt Colonel Charles Umphelby died of wounds received in action at Driefontein on 12 March 1900. He was buried along with other British Army fatalities from the temporary field hospital a few hundred metres away from the building which still stands, in one of the most isolated areas of rural South Africa. He was Australia’s highest ranking officer to die in the South African War.

In 1989, Dr Garth Benneyworth located an overgrown burial site containing the final resting place of seven British soldiers who, in a nearby field hospital and which building still stands, died of their wounds received in action on 10 March 1900, during the Driefontein action. Among the graves was that of Lt. Colonel CE Umphelby. Dr Benneyworth’s aim, since the 1990s, was to ensure the restoration of the burial site. This became possible in 2017, when as Head of Department Heritage Studies at Sol Plaatje University, Kimberley, he revisited the site in 2015 and again in 2017. Over the course of almost 115 years the burial site was never maintained and at risk of destruction by the environment. By 2017, animals had burrowed into the graves and excavated human bones which Benneyworth reburied. During the period 2015, since Benneyworth’s last site visit and the one of 2017, Mr Sabata Tsoanyane had purchased the farm and, at his cost, fenced the cemetery. In 2018, Mr Tsoanyane agreed to support further initiatives at this burial site.

In 2017, Dr. Benneyworth contacted the Commonwealth War Graves Commission, South African Directorate who, after a site inspection, undertook to restore and maintain the site. In 2019, rock cairns marking the graves were stabilised, the boulders whitewashed and vegetation posing a risk to the graves removed, works undertaken by the Commission. It should be noted that Mr Tsoanyane, had on prior occasions of his own volition, attempted to keep the area clear of encroaching vegetation.

Umphelby was well known throughout South Western Victoria as a junior officer and as Commanding Officer, Fort Queenscliff. He was in South Africa on secondment as a Special Service Officer. Dr Benneyworth’s background article is published in the Journal of Australian Colonial History in 2011, and available to read by clicking here. 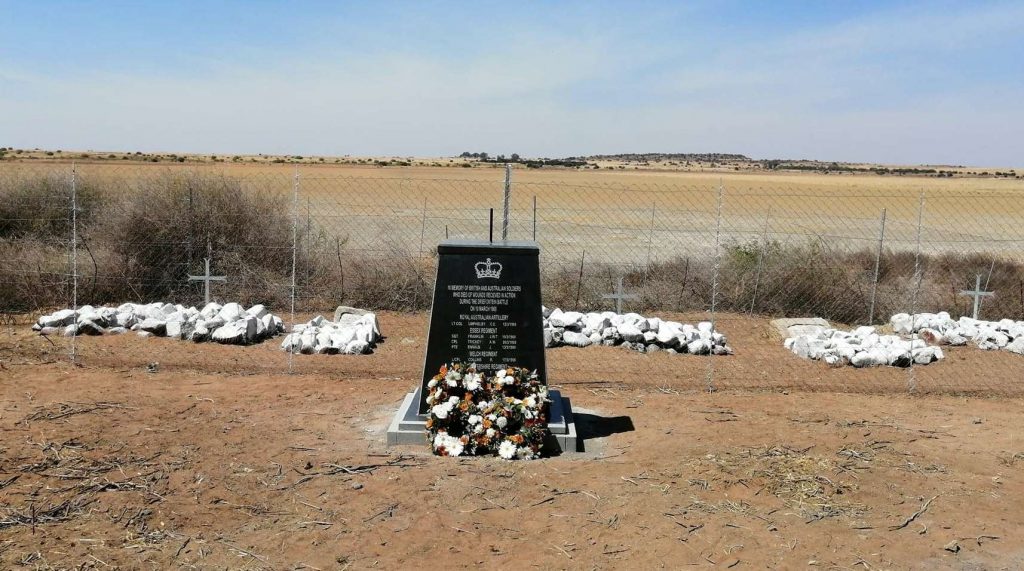 Dr. Benneyworth, together with Australian individuals, raised funds to construct and erect a memorial at the site commemorating those soldiers buried there and another Australian soldier, Trooper WJ Abrahams who went missing in action and has no known grave. The fundraising project was led by MHHV Secretary, and Past President of the Fort Queenscliff Museum Association, Mr Jason McGregor in Victoria. The memorial was constructed in Kimberley, South Africa and erected during the week of 7 October 2019, to align with the 120 anniversary commemoration of the South African War (Anglo Boer War). 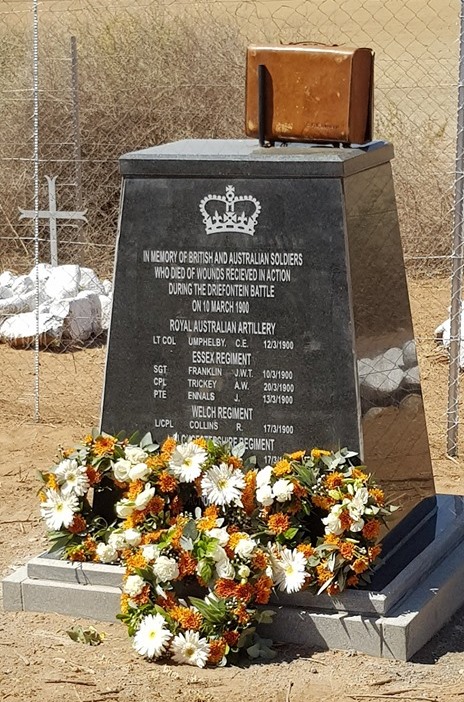 The memorial was unveiled on 12 October 2019, during a ceremony organised by Dr Benneyworth and the Friends of the War Museum of the Boer Republics. Ms Gita Kamath, the Australian High Commissioner to South Africa and non-resident accredited to Angola, Botswana, eSwatini, Lesotho, Mozambique and Namibia, joined the occasion. 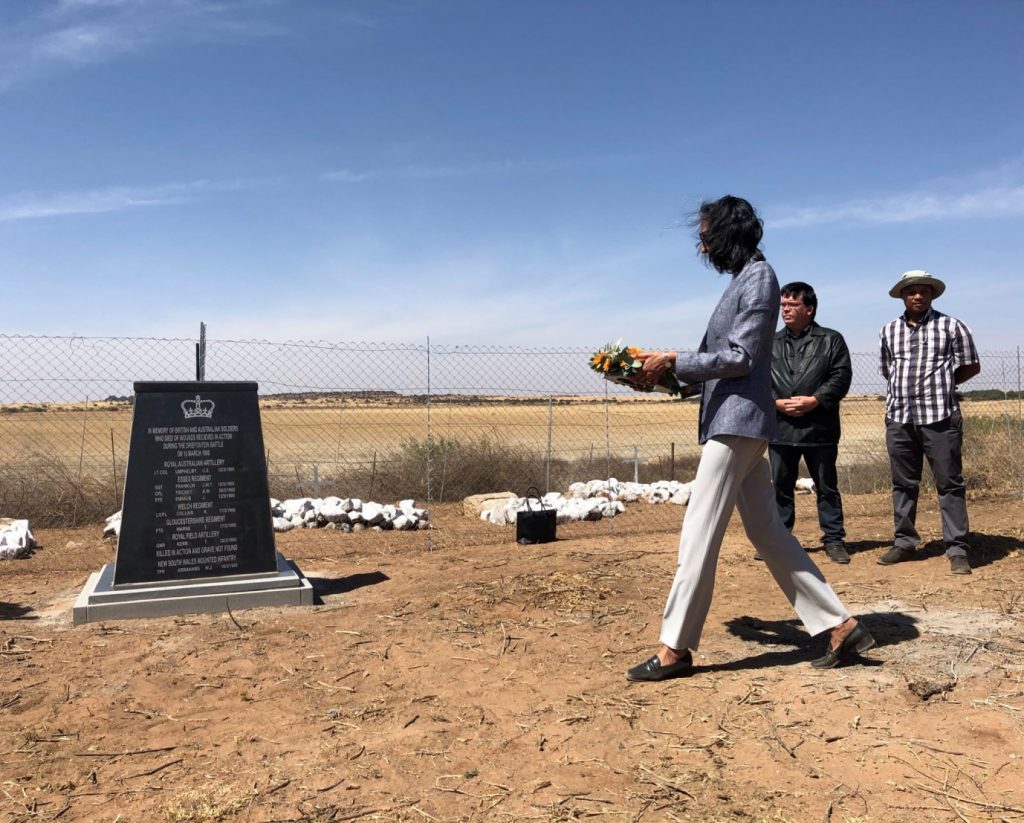 Wreaths were laid by:

The next phase of the project will see in 2020, interpretation panels, made from granite, erected at the site to contextualise the burial site as part of the overall Driefontein action. Additional funds will also be raised to create a sturdy and permanent fenced enclosure for the burial site. 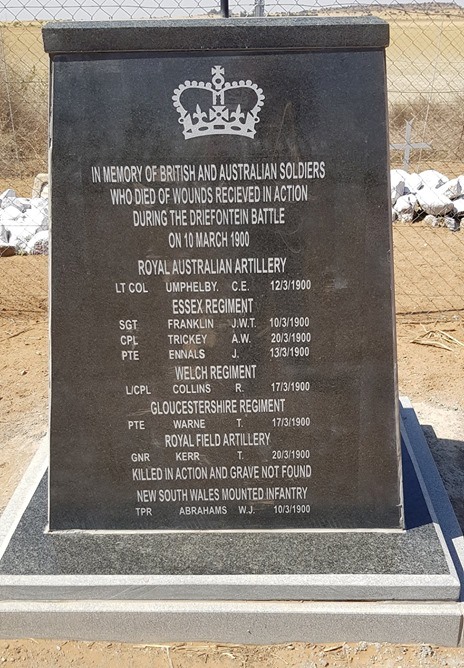 The memorial is a four panelled granite structure. It obverse panel lists the Roll of Honour which reads:

IN MEMORY OF BRITISH AND AUSTRALIAN SOLDIERS WHO DIED OF WOUNDS RECIEVED IN ACTION DURING THE DRIEFONTEIN BATTLE ON 10 MARCH 1900.

KILLED IN ACTION AND GRAVE NOT FOUND. 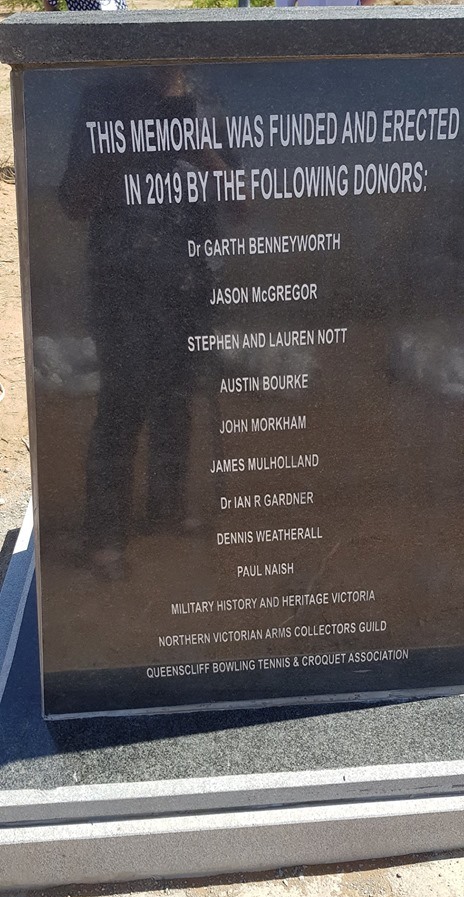 The reverse panel lists the donors and reads:

This memorial was funded and erected in 2019 by the following donors: