The Myth of Government Cover-up in the first Darwin Raids 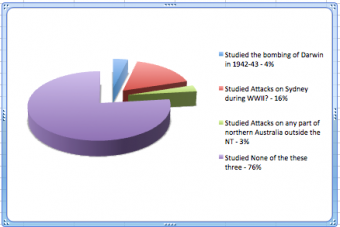 The interesting aspect of the survey insofar as discovering WHY the Darwin raids are so-little known about is indicated here: 96% of the respondents – and therefore the country – had simply not been taught it in their school years.
Question Two asked:
2. In what state or territory of Australia did you undertake primary and secondary school?
The results were: NSW: 96; Vic: 83; SA:  62; WA: 42; QLD: 80; Tas: 6; NT: 19; ACT: 4 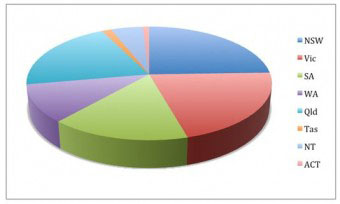 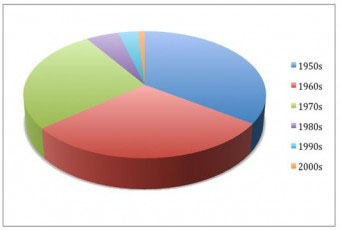 Not surprisingly, all of the NT residents had heard of the bombing of Darwin – but all of those who had studied it had done so in the 1990s and in the 21st century; reflecting the growing efforts of the Darwin City Council and the Northern Territory Government to highlight the raids.  Those who had studied the attacks on Sydney by midget submarines all came from NSW, with two exceptions from Victoria, and one each from South Australia and Queensland.
Analysis of the decade people had studied in the curricula areas showed that almost universally people had never been educated about the Darwin raids.  This included people who had attended high school in the 1950s, 60, 70’s, and to a lesser extent in the 1980s, and 1990s.
Indeed, the raids were not even commemorated very much in the place where they happened, let alone throughout wider Australia. For example, the Northern Territory News of 19 Feb 1972 covered the commemoration in a page five feature article – far removed from the nationally televised events of today. It was not until 1992, the 50th anniversary of the assault, that the event really gained prominence, and that was largely due to the efforts of the Darwin City Council, who supported financially and organizationally the events. The 70th anniversary saw around 10, 000 people attend the Darwin Cenotaph.
Australian school curriculums in the 1950s and beyond, in the oft-used title of “social studies”, was a combination of history, geography, and civics. In primary school and junior secondary – before students chose their own subjects for senior school – the history elements combined study of the First Fleet arriving in Australia in 1776; the colonization of the eastern seaboard of Australia; the country’s role in the British Empire, Western history such as Greco-Roman materials; medieval times; the Industrial Revolution, and the lead up to World War I, though not the war itself. World War II was covered, but in little detail, and nothing of the Top End being at war.  For example, Emeritus Professor of History Alan Powell, of Charles Darwin University, comments about the 1970s:
I taught history at Scots College, Sydney, during that period, from a syllabus laid down by the NSW Education Department. There was nothing in it that related to the Northern Territory, let alone the bombing of Darwin – and, for that matter, scant reference to Australian History at all. Europe took first place.”
Historian Dr Peter Williams recalls:
I taught high school History and English in Tasmania and the Northern Territory in the 80s and 90s. Neither in the social studies, nor in the senior [grades 11 and 12] history curriculum, was any mention made of the 18 month Japanese bombing campaign against Darwin. I remember being mildly surprised, looking over the social studies curriculum on my arrival in Darwin in 1988, to see that students in a city which had been heavily bombed were not intended to learn anything of it – at least if the official curriculum was followed – which it often was not.”
Of course, a student could indeed miss out on an area in which the Darwin raids might be mentioned, fleetingly or extensively, through absence or simply inattention.
In summary, there has indeed been an absence of the story of the Darwin raids being imparted to school students – and this explains the general perception of “we weren’t told” amongst those hearing about the Darwin raid for the first time. There was no government cover-up – but there was a lack of national education.
Carrier Attack is published by Avonmore Books.
List of Works Consulted
(This article has drawn upon over 300 references in the book Carrier Attack, authored by Dr Tom Lewis and Peter Ingman, a study of the 19th February 1942 raids.  Only those critical to this article are cited here.)
About Australia. http://australia.gov.au/about-australia/australian-story/japanese-bombing-of-darwin Accessed May 2013.
A Secondary School Education Resource on the Bombing of Darwin,
http://www.darwin.nt.gov.au/sites/default/files/Bombing-Darwin-FEDFrontline.pdf Accessed October 2012.
Darwin Defenders 1942-45 Inc. http://au.answers.yahoo.com/question/index?qid=20120424063442AAdn1UUAccessed May 2012.
Lewis, Tom, and Peter Ingman. Zero Hour in Broome. Adelaide: Avonmore Books, 2010.
Lewis, Tom. Darwin’s Submarine I-124.  Adelaide: Avonmore Books, 2011.
Lewis, Tom, and Peter Ingman. Carrier Attack. Adelaide: Avonmore Books, 2013.
Lockwood, Douglas.  Australia’s Pearl Harbour. Melbourne:  Cassell, 1966. (pp. 192-200)
National Archives of Australia File: 816, 37/301/293, Reference Copy of AWM Confidential No.137. “Findings and Further and Final Report – Commission of Inquiry on the Air-Raid on Darwin 19th Feb. 1942.” Original. Mr. Justice Lowe. 1942 – 1942. 12082127.  (Cited as the Lowe Report)
National Archives of Australia File: A431 1949/687.  Bombing of Darwin – Report by Mr. Justice Lowe 1942 – 1949 66354, (Lowe Commission Report, Parliament of the Commonwealth of Australia.1945.  (Cited as the Lowe transcripts)
National Archives of Australia. A5954, 327/12.  “Advisory War Council Agendum No. 2/1942.”
Northern Territory Library http://www.ntlexhibit.nt.gov.au/exhibits/show/bod Accessed December 2013.
Powell, Emeritus Professor of History Alan, Charles Darwin University. Email to the author, 6 November 2012.
SKWirk.com.au. http://www.skwirk.com.au/p-c_s-14_u-91_t-200_c-668/the-bombing-of-darwin/nsw/the-bombing-of-darwin/australia-and-world-war-ii/the-australian-home-front Accessed May 2012.
The Australian. http://www.theaustralian.com.au/news/features/darwins-finger-of-shame-points-at-military/story-e6frg6z6-1226268053891 “Darwin’s finger of shame points at military.” 11 February 2012. Accessed May 2012.
“The Bombing of Darwin – Australia’s First Taste of War.” http://scheong.wordpress.com/2013/04/19/the-bombing-of-darwin-australias-first-taste-of-war/ Accessed May 2013.
Trove Digitized Newspapers. http://trove.nla.gov.au (Various cited in the footnotes)
Williams, Dr Peter, Historian. Email to the author, 6 November 2012.
Yahoo 7 Answers. http://au.answers.yahoo.com/question/index?qid=20120424063442AAdn1UU Accessed June 2012.